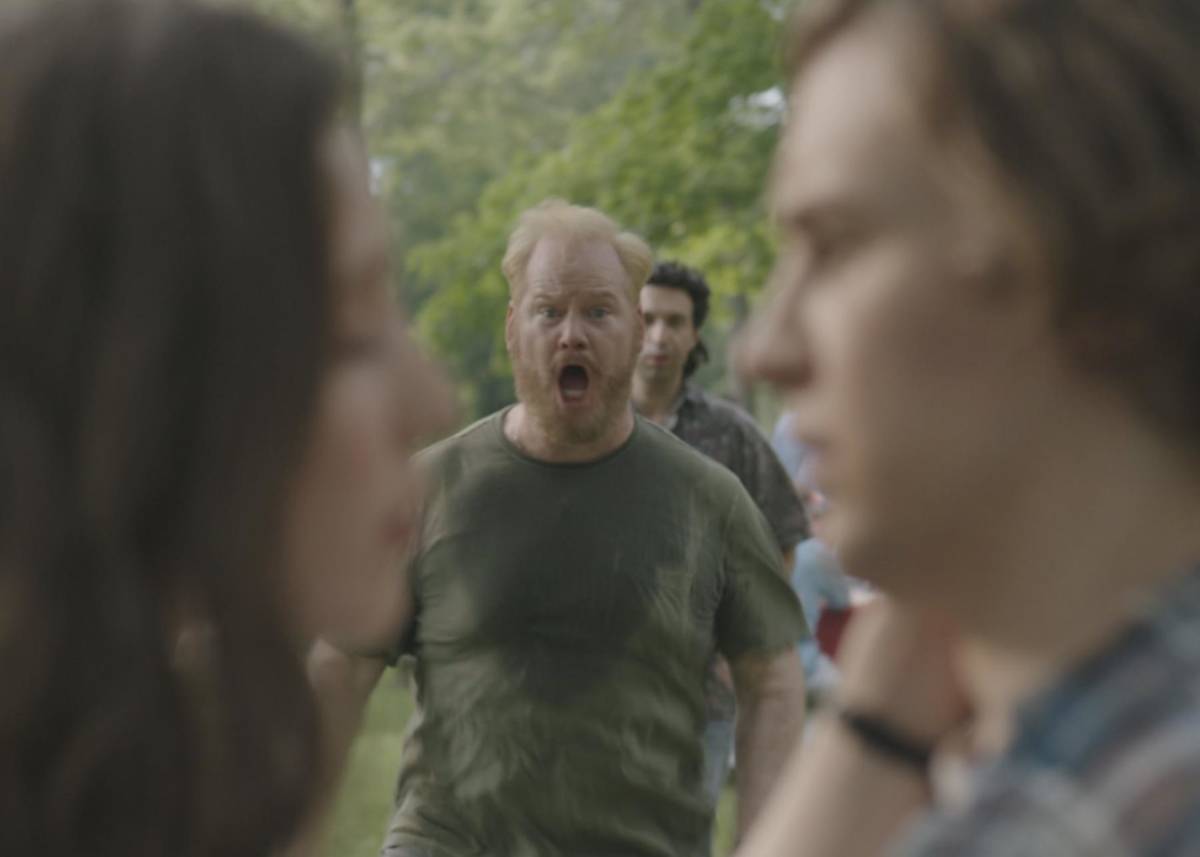 Actor-comedian Jim Gaffigan and director Miranda Bailey took some time to chat with Cultured Vultures about their new film, You Can Choose Your Family, during the 2018 SXSW Film Festival.

Congrats on the premiere of You Can Choose Your Family.
Jim Gaffigan: Thank you.

How much of a thrill is it to come to SXSW?

Jim Gaffigan: It’s amazing. It’s also great. It was so fun to make the movie. There’s the balance of you want it to obviously work and you want people to see it but getting into to SXSW means it’s good, right?
Miranda Bailey: I don’t know.  Does it?

Jim Gaffigan: Did you see it?

I saw it.
Both: What did you think?

Jim Gaffigan: What was great about Miranda was she was very passionate about the project. She was doing this to make the script great. I wouldn’t have gotten into a project with someone who just wanted to be a director. She was very passionate and with every kind of a question, she had thought of a question or she knew exactly what she wanted. Sometimes as an actor, you’ll ask so when a director “what’s going on here?” They’ll be like, “I don’t know.” You want someone to know what’s going on in the scenario like they are the curator of the story. It’s their point of view and as an actor, you’re always trying to think of how you can assist in telling the story.

Miranda Bailey: There are so many ridiculous questions that people ask you. Like what kind of jelly beans do you want in the jar? What do you want the curtains to be, see-through or not? If I did not know the answer to the question, then I knew I needed to fix something in the script.

Jim Gaffigan: Being a producer, I think it’s really important to have that experience from even like shifting. I’ve been an executive producer of a television show and obviously an actor so being a producer is so invaluable in understanding the sheer volume of questions. As an actor, you’re shielded from a lot of the bullshit. As a producer, you’re like, I can’t believe we’re dealing with this question but we have to answer this question now and move on but we have to keep the wheels moving.

Miranda Bailey: I feel very lucky as I produced a lot of movies before this and I acted in a lot of things before this and so I was able to understand what producers need and are afraid of and what actors need and are afraid of. Because those are the two branches that you’re collaborating with more than directing. Get this chair, get this whatever. So it’s good that I was able to know what they were going through.

Jim Gaffigan: There’s also a collaborative spirit that I think is so important in movies. Look, directors—it is a dictatorship and it should be just for clarity of purpose and point of view. But the collaborative spirit, you’ve got to determine who is going to add value and who I’m got to manage their expectations that they’re adding value. I don’t want to do that. I love presenting ideas –take them or leave them– and then doing my thing. It’s no mistake that a lot of producers and directors that it flows back in between.

Miranda Bailey: What was your favorite scene?

It’s hard to say. I just had this gut feeling towards the end of You Can Choose Your Family that they were going to end up at the same table.
Miranda Bailey: Yeah.

Jim Gaffigan: Oh, yeah. It’s interesting because –even more for you– when we were watching it and listening to the audience and seeing them on the journey, I knew it was going to work on some level — the journey and the tone because there’s something–it’s an unfamiliar but it’s a familiar tone on a topic that is pretty toxic. That’s where I was like, what if people hate Frank? At the front, we give them a lot of reasons to hate him but the humor is about people appreciating the gravity of what’s occurring — the level of deception that’s occurring, and still going along with it.

What leads you decide on what scripts to pick and take those roles?
Jim Gaffigan: I’ve always really loved acting but a lot of it is the opportunities that are presented to me and I feel as though for me, I want to do something that has some depth. This is a comedy with some drama but I also feel like I can act. Over the course of my career, I reoccurred on That ’70s Show for a couple years but I was surprised how unfulfilling four-camera comedies are. You’re just saying a line. I did some single-camera stuff and I was surprised. That’s not rewarding. With dramas or You Can Choose Your Family, I feel like there’s acting. The most rewarding moments are the times where you’re caught up in the emotions of the character in like the final scene when we’re exposed and there’s Laura and Bonnie there. I’m looking at these two wives and dealing with the anger or disappointment. Those are the fun moments for me. I’m talking to you as an actor, too. Those are the moments that are really kind of rewarding. We’re getting lost in this moment. It’s also acting is really fun.

Miranda Bailey: When it makes you feel real inside your body, you’re taking pieces of your own life and putting it into these things so it’s kind of cathartic.

Jim Gaffigan: It’s fun. It’s really fun. That’s the balance — at least for me. I’ll be presented with some opportunities and they’ll be like, this will be good for your career. I’m like, yeah, but I’m not going for fame. I’m going for quality. I want to do things that are, it sounds corny, but creatively fulfilling.

Jim Gaffigan: It took me a long time to realize that because I was so excited to be employed. I was like, I’m on three shows right now. That’s not as rewarding and maybe it’s having a family and balancing stand-up that for me to do something, it has to work within the balance of my family time and stand-up but also, there’s a lot of work that goes into these things. It’s not just about coming to SXSW and having fun.

Jim Gaffigan: That chicken was amazing! The food in Austin is amazing. I would want to go to Austin anyway.

Did you ever come here for the comedy festival?
Jim Gaffigan: I’ve been here for Moontower. I was here for the television festival. Austin’s amazing. I was here in October and doing shows at the Austin City Limits Moody Theater.

Miranda Bailey: Where are you from?

I think you had a book signing at Carmichael’s and timing didn’t work out on my end because I was out of town.
Jim Gaffigan: It’s interesting when I did–I have this joke about getting a box of donuts. The first time I got a box of donuts was in Louisville and it was for Dad Is Fat. Someone gave me a box of donuts and I was like, this is a very strange thing. I had jokes about donuts. After that, there was a series like every other city, someone would be getting me a complete box, and they were usually gourmet donuts. Then I developed some material about someone getting me donuts.

Thank you for your time.

You Can Choose Your Family held its world premiere during the 2018 SXSW Film Festival.