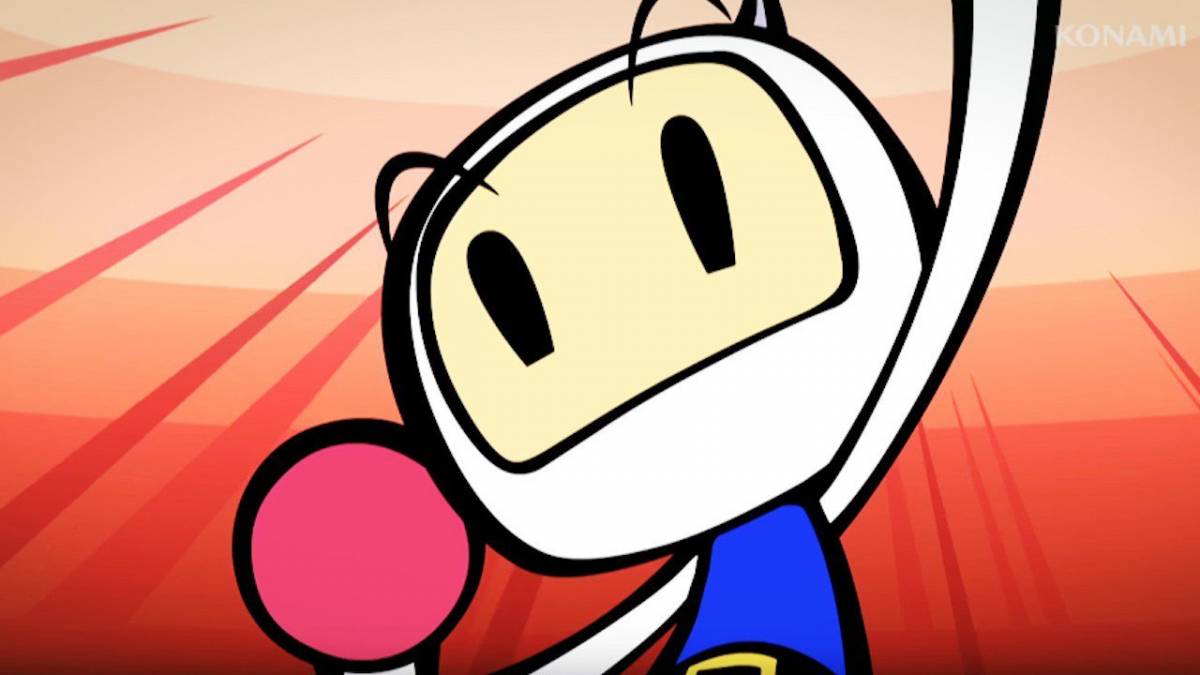 Starting up a Bomberman game fills you with anticipation as you recall the close shaves and total annihilations of yesteryear. When you start up Super Bomberman R, the title music is a joy to behold, invoking all the nostalgia of classic Konami titles. The soundtrack throughout the game affirms these foundations and the retro style doesn’t interfere with the quality composition.

As far as the game looks, it’s everything you’d want from a Bomberman title in 2017. It’s colourful, flashy, and has character. Without touching a controller, you could be forgiven for thinking this is everything Bomberman and video game fans have been looking for.

The Story mode is that second child you thought you wanted but then you realise you were happier with just one. SBR has you and your seven siblings fight it out against the five Dastardly Bombers who have been summoned to conquest a Solar System. The opening cutscene introduces each of the playable two-dimensional characters in a sequence that, despite its endearing charm, is far too long; the same can be said for all cutscenes. These eight characters vary from the egomaniacal ‘Black’, to the perennially dozing ‘Blue’. Most, if not all, of these robot warriors have childlike sensibilities that make you reach for the skip button quicker than you can hard quit on the entire campaign itself. 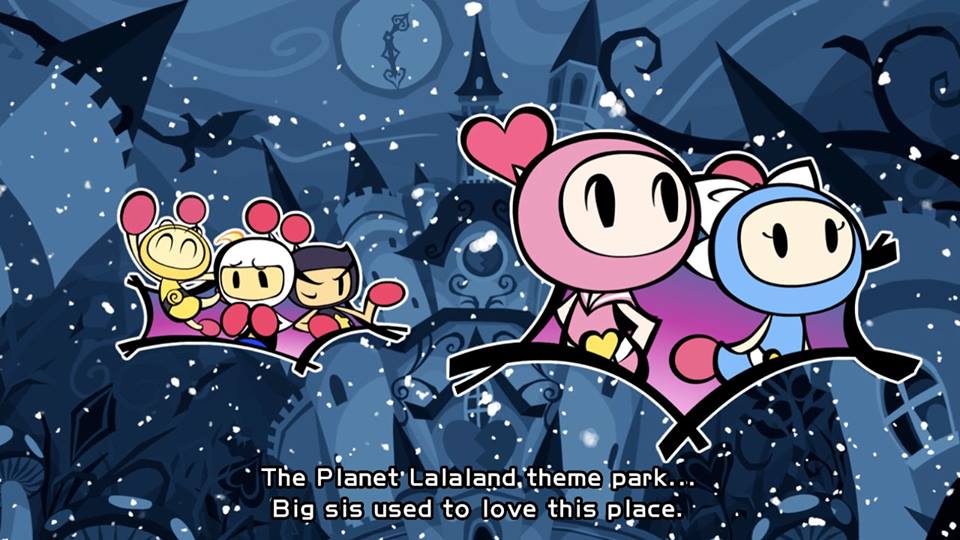 The boss fights are in two parts: the first is a one-v-one classic style deathmatch where luck plays a large role; the second is a large-scale isometric boss fight. This latter part piqued my interest, but poor character design and frustrating level design left me wanting. Controlling your Bomberman can be an issue in the Campaign due to the angled map layout. I would suggest using the D-Pad instead of the analog stick. This isn’t an issue in multiplayer. Planet 3 is genuinely enjoyable, marrying the essential components of challenge and joy, but it is an exception. As someone who has played the campaign fully and taken back the Starry Sky Solar System from evil, I can firmly advise you to not bother.

The English V/O is slow and drains the characters of any self-worth. The clumsy exposition is a treat, especially on Planet Lalaland (wait, I mean Moonligh– Oh no, it is actually Planet Lalaland). Watching two sisters remind each other that they had a Big sister who malfunctioned as if they had no idea was cringeworthy, to say the least. The worst part of the V/O reveals itself in the multiplayer AI. When two characters ghost through each other, they each say a quirky little catchphrase. However, with each computer-controlled player having identical AI personalities, they can spend half a round treading the exact same path and thus constantly repeating itself like a broken Bill Withers record.

The AI is particularly unfriendly to any kind of party atmosphere. Try and introduce your friends to the Switch with this title and you’ll be met with a dead stare as the AI dispatches them with ease. Unless you have four, or eight, friends playing at the same time, the multiplayer can also be a struggle at times.

The best attribute of multiplayer is the return of Revenge Carts, which see you posthumously lobbing bombs into the arena in an attempt to get back in the game. Kill your enemy, replace them. This can lead to some very exciting matches. The maps by-and-large offer little variation, with most of the environmental changes demanding no real change in strategy.

Each of the controller settings work without a hitch.I found the most pleasurable play style was with the Joy-Con Grip, but the simple mechanics are easily transferable. 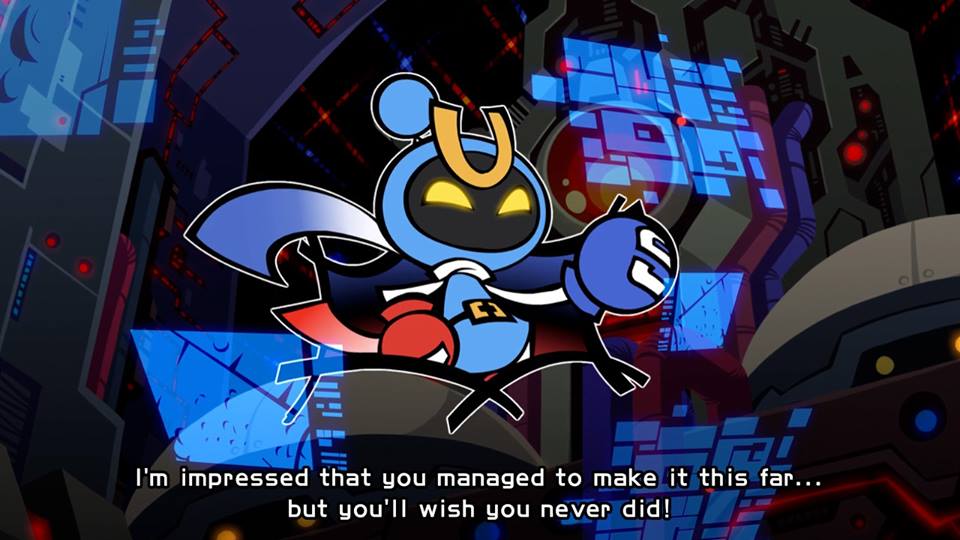 Like many Switch titles announced, you can see a distinction between games designed for the TV and those designed for the handheld. Super Bomberman R falls into the latter category and wouldn’t look out of place on a PS Vita. Despite this, the cutscenes are vibrant still images that do a good job of distracting you from the underwhelming script.

And last but not least: No micro-transactions. Super Bomberman R is fairly stingy with its in-game currency but, as of yet, there are no micro-transactions available to increase your Gems (which oddly look like Gold coins and can be used to purchase accessories, characters and maps). The absence of real money expenditure in-game is an issue, though. This game is basically £50. Maybe if they had other avenues of cash flow, that could have been reduced and made this game more consumer-friendly. As it is, there isn’t enough to warrant the steep price tag and while I don’t encourage assessing a game’s value by its price tag, there is not fifty quid’s worth of game here.

Verdict
Super Bomberman R has its flaws, but the core multiplayer gameplay is still the same as it ever was. Addicting and the more friends you can get involved, the better. Maybe ask them if they’ll chip in on buying the damn thing, though.
6.5
Cultured Vultures is a pop culture website established in 2013 covering all things gaming, movies, and more. We eat your words.
All The News On The Biggest Games