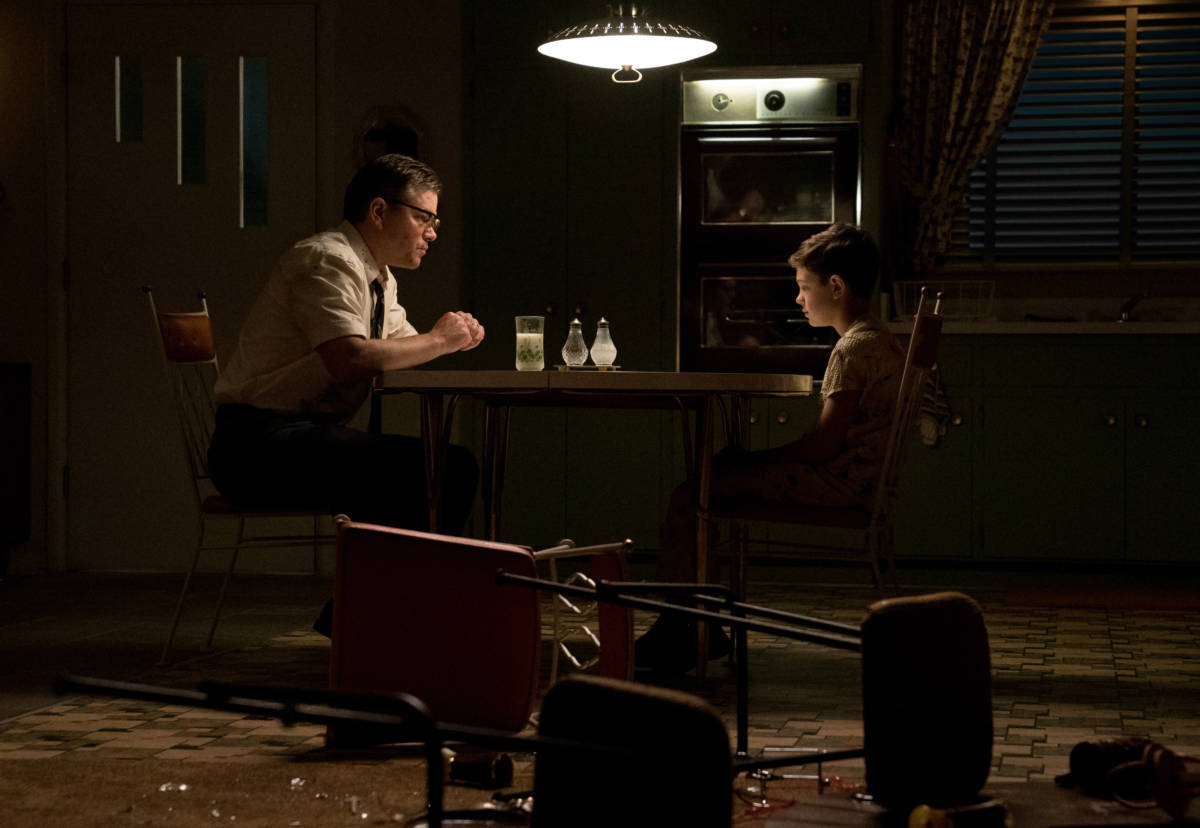 Left to right: Matt Damon as Gardner and Noah Jupe as Nicky in SUBURBICON, from Paramount Pictures and Black Bear Pictures.

Suburbicon, directed by George Clooney, is such a messy film that the satirical social commentary doesn’t hit.

There’s enough material here to have made a better film. The script comes from Clooney, Grant Heslov, and the Coen brothers and there’s no excuse for it to have been so messy of a film. The satire could have landed better if they weren’t also dealing with the murder investigation, let alone the time spent exploring the racial commentary. An impressive cast including Matt Damon, Julianne Moore, Noah Jupe and Oscar Isaac isn’t enough to save the film.

Be warned: There will be spoilers involved here. There’s a lot to say about the angle the film takes and it can’t be done without spoiling the film. It’s such a muddle anyway that it doesn’t really matter.

Let’s look at the opening scene alone: It’s the summer of 1959 and an African-American family moves into the utopian neighborhood. The people of Suburbicon just aren’t ready for this family to move in and they let their feelings be known. The film’s opening follows what happened during the events that inspired the film. The mailman comes to the door and asks for the person who lives there as he thinks the maid answered the door. Upon finding out that the new family moving are people of color, they warn the city’s residents by going door to door.

Margaret (Moore, who also doubles as Maggie’s sister, Rose) tells her nephew, Nicky (Jupe), to go play baseball with the boy next door. The next thing we know, Gardner Lodge (Damon) tells Nicky that there are men in the house, Ira (Glenn Fleshler) and Lewis (Alex Hassell). From here on after, the film gets messy as they turn focus to the murder investigation after Rose ends up dying from the chloroform.

Inspired by the 1957 documentary, Crisis in Levittown, Suburbicon would have been better off following the true story of William and Daisy Myers and changed to Mayers in the film but pronounced Meyers (Leith Burke and Karimah Westbrook) as the first African-American family moved into Levittown, Pennsylvania. While their scenes play it straight, Clooney does it a disservice with the overall film. The film would have been better to just send a message similar to that of what Loving did last fall. Instead, the filmmakers decided to throw the Lodge family into the picture by mixing in the Levittown setting with a script that the Coen Brothers wrote in the late 1990s, a comedy/thriller that fits the mode of Fargo and Burn After Reading.

Lodge’s decision-making isn’t great. Did Lodge participate in a mob deal that went sour or something? Or is he trying to commit fraud against his insurance company? Insurance claims investigator Bud Cooper (Isaac) becomes a tiny player in the film and he’s just as soon killed off for wanting in on the insurance money.

There’s bad decisions all around here and Suburbicon does not end up meeting the high expectations that have been set for the likes of a Clooney or a Coen Brothers movie. A film that should have been considered Oscar worthy with its pedigree is one that is too clumsy to even consider, let alone recommend viewing.