10 Strongest One Piece Characters of All Time 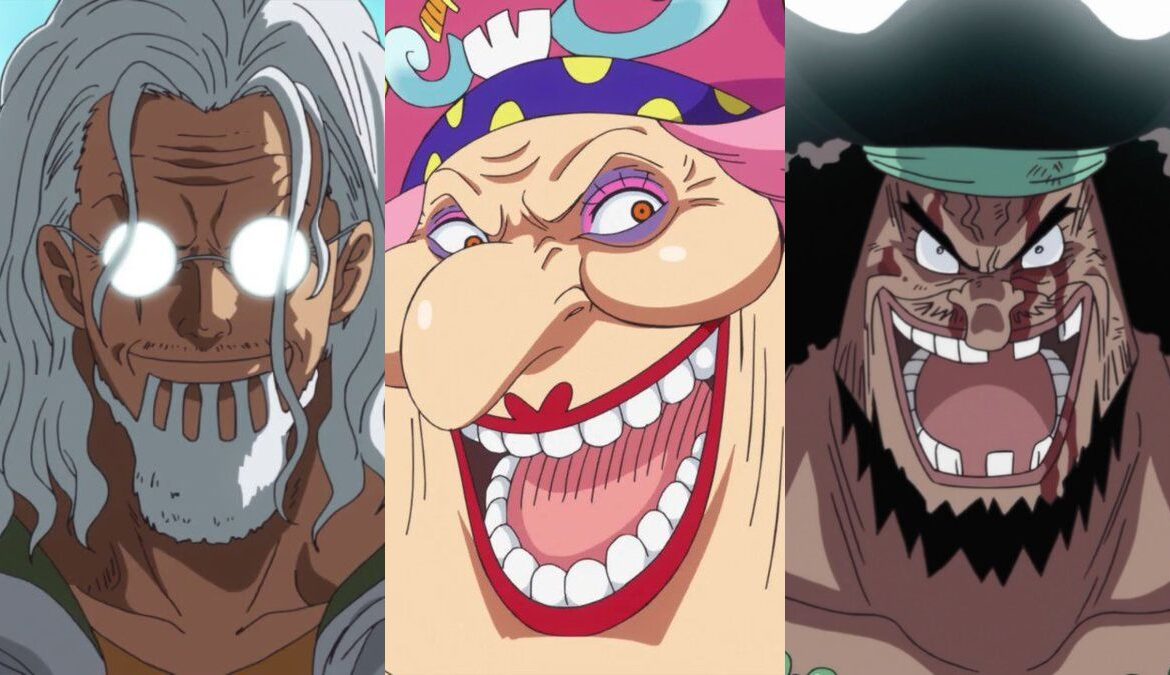 The world of One Piece is filled with several notorious pirates. This all started when pirates from all seas sailed toward the Grand Line after the Pirate King’s execution, starting the Great Pirate Era. During this era, many strong pirates and marines made a name for themselves due to their powers and abilities. But only a few people are deemed the strongest among all of them.

When you watch One Piece, you’ll definitely encounter several strong characters. They could be overpowered Devil Fruit eaters using superhuman abilities or monstrous Haki users utilizing spiritual energy. Either way, these characters are forces to be reckoned with. If you’re wondering who the strongest One Piece characters are, then look no further.

A small warning: this’ll contain spoilers for the manga, so read with caution.

Known as the Dark King, Silvers Rayleigh is a strong pirate who served as the right hand of the Pirate King Gol D. Roger. He’s currently retired and settled down with his wife Shakuyaku in Sabaody.

As one of the people who didn’t eat a Devil Fruit, Rayleigh possesses Haki powerful enough to discourage the marines from trying to capture him. He also went toe-to-toe with Admiral Kizaru, one of the most formidable members of the marines. Rayleigh also swam in the monster-filled Calm Belt to reach Amazon Lily, yet he arrived unscathed despite fighting Sea Kings barehanded.

Rayleigh was also the one who taught Luffy how to use Haki during the two-year timeskip. His training allowed Luffy to utilize Haki and think of new ideas, such as Gear 4. Without Rayleigh, Luffy wouldn’t have reached the strength he has today.

As a former member of the Seven Warlords of the Sea, Dracule Mihawk is the strongest swordsman in the world. Even without having much influence, his bounty reached 3.5 billion berries due to sheer power alone.

Even though Mihawk hasn’t eaten a Devil Fruit, his Haki and swordsmanship are enough to destroy giant ships and icebergs from far away. He also wields one of the 12 Supreme Swords, a Black Blade named Yoru. Mihawk’s swordsmanship is also superior to an emperor himself, Red-Haired Shanks.

Mihawk also defeated Roronoa Zoro, a Three-Sword style user, in Baratie using a single tiny knife. During the two-year timeskip, Mihawk also served as Zoro’s master, teaching him the fundamentals of Haki. Right now, Mihawk is the obstacle that stands in the way of Zoro’s dream of becoming the world’s greatest swordsman.

As another former member of the infamous Rock Pirates, Big Mom is the fiercest female pirate in the world. She currently rules her territory named “Totto Land” and is the leader of the Big Mom Pirates. Big Mom was also a member of the Four Emperors before being defeated by Trafalgar D. Law and Eustass Kid.

Big Mom ate the Soul-Soul Fruit, allowing her to interact with and manipulate human souls. Even without her Devil Fruit, her own Haki is enough to destroy her surroundings whenever she gets mad. She possesses three weapons named Napoleon, Prometheus, and Zeus, which add a lot of power to her arsenal.

Her army also made Big Mom a formidable emperor since it consisted of her powerful children like Katakuri and Perospero. In the Wano arc, she also allied with his former crewmate Kaido to form the Big Mom X Beast Pirates alliance.

As the primary antagonist of the Wano arc, Kaido is the most formidable enemy Luffy has fought to date. Along with Big Mom and Whitebeard, he was a former member of the Rocks Pirates and the Four Emperors.

Kaido is also known to be the strongest creature in the world. He was given the Fish-Fish Fruit Model: Azure Dragon, which gave him the ability to transform into a menacing dragon. His Haki was also strong enough to knock Luffy out in one blow.

He’s also famous for being indestructible because of his sheer strength. Despite being powerful, he was captured and tortured many times, yet he still managed to survive. Kaido also survived a 10,000-meter fall, only coming out with a headache even though he left a giant crater and sank a nearby ship.

Who can forget the main protagonist of the story? Monkey D. Luffy is the captain of the Straw Hat Pirates and is currently a member of the Four Emperors. With a bounty of 3 billion berries, Luffy continues to explore the New World, hoping to find the One Piece.

Luffy ate the Gum-Gum Devil Fruit, which gave him the properties of rubber. He can also use all three types of Haki, allowing him to defeat many powerful enemies. Recently, he also awakened his Devil Fruit, giving him mythical power that even the World Government itself fears.

With his Devil Fruit, advanced Haki, and ironclad determination, Luffy is on the path to achieving his dream of becoming the King of the Pirates.

He’s the only person with two Devil Fruits, the Dark-Dark Fruit, and Tremor-Tremor Fruit. Using his Dark-Dark fruit, he can control darkness at will, absorbing everything around its vicinity, including Devil Fruit powers. Blackbeard also took the late Whitebeard’s Devil Fruit, the Tremor-Tremor fruit, which allows him to create earthquakes that can potentially destroy the world.

Blackbeard was also responsible for capturing Portgas D. Ace, Luffy’s brother, leading to Ace’s death. As of now, Blackbeard is one of the primary candidates to be the final boss Luffy will face at the end of the series.

Monkey D. Garp is the marine equivalent of Gol D. Roger. He’s known for fighting to the death with the Pirate King himself, being named the Hero of the Marines. Garp is also the father of the Revolutionary Army leader, Monkey D. Dragon, and the grandfather of our protagonist, Monkey D. Luffy.

Along with most people on this list, Garp’s Haki makes up for his lack of a Devil Fruit. Despite his power, he turned down the Admiral position several times, making him retain his Vice-Admiral position. With the help of Roger, he was also able to take down the Rocks Pirates in God Valley.

Right now, Garp is mentoring new marines such as Koby and Helmeppo. Both of them continued to excel due to Garp’s tutoring. Monkey D. Garp is definitely the strongest and most experienced among all the marines.

Currently one of the Four Emperors, Shanks is the captain of the Red-Haired Pirates and was also the one who motivated Luffy to become a pirate. With a whopping 4 billion bounty, the former Roger Pirates member has enough strength to take down thousands of soldiers.

Although he hasn’t eaten a Devil Fruit, his Haki is strong enough to make him one of the most feared pirates of this era. During the Summit War, Shank’s presence alone when he entered the battlefield was enough to finally stop the war. His swordsmanship also made him a rival to the greatest swordsman Dracule Mihawk. It’s also said that he’s responsible for cutting the left arm of Eustass Kid.

We’ve yet to see Shanks in battle, but we can be sure that we’ll see him again in the future. He and Luffy promise they’ll meet again to return the straw hat when Luffy becomes a great pirate.

Known as the Strongest Man in the World, Edward Newgate, or “Whitebeard,” is a powerhouse who was able to rival even the Pirate King himself. He was a former member of the Rocks Pirates and one of the Four Emperors during his time.

Whitebeard’s Devil Fruit, the Tremor-Tremor fruit, was so powerful that it destroyed everything in his path. His power and fleet were enough to leave the Navy Headquarters in shambles after the Summit War. Due to old age and illness, he didn’t have his full power during the war, leading to his death at the hands of Blackbeard.

Still, his power and influence over the world were respected, making him one of the greatest pirates of his time. He had the capabilities to find the One Piece, and yet he still didn’t choose to pursue it since all he ever wanted was a family.

Of course, the Pirate King, Gol D. Roger, deserves the #1 spot on this list of the strongest One Piece characters. He made a name for himself after he reached Laugh Tale and uncovered the secrets of the Void Century. Along with his crew, Roger was the only pirate to reach the end of the Grand Line.

Even without a Devil Fruit, his Haki allowed him to conquer the Grand Line and become the most notorious pirate to sail the seas. During his time, he had strength equal to Whitebeard and Garp, making him form rivalries between the two. Some of Roger’s crewmates also became members of the Four Emperors, namely Red-Haired Shanks and Buggy the Clown.

Although he turned himself in to be executed, his death led the world into the Great Pirate Era. Even though he passed away, his legacy lives on in the pirates of the current generation.

READ NEXT: 10 Anime Like One Piece You Should Watch