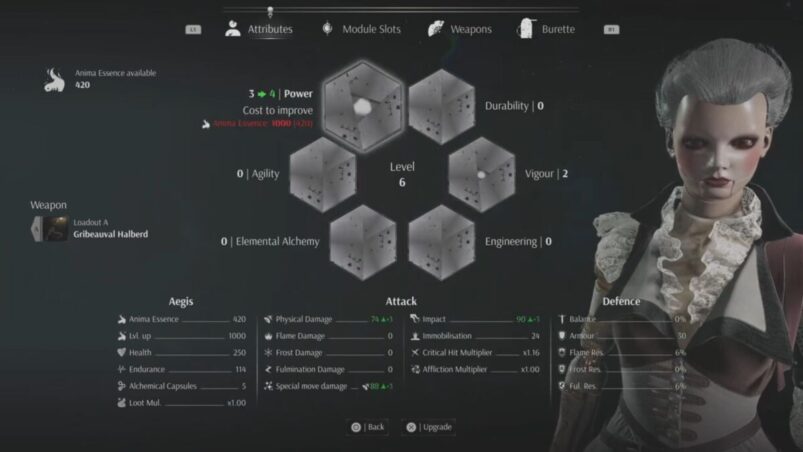 In Steelrising, you are Aegis, an alchemical clockwork automaton in service to the Queen. It’s up to you to stop an army of berserk automatons from destroying a revolutionary Paris and find out the conspiracy behind their creation. While the game has a lot of stats, some of them aren’t explained well anywhere in the game. This guide will go in-depth on the Power stat, one of the more straightforward ways to build out Aegis in Steelrising.

The Power stat is the closest any stat comes to being exactly what it says on the label. When you invest points into the Power stat at Vestals you find across Paris, it will increase normal and special attack power when using weapons with the Power affinity. It will also increase a stat called Impact, which is unfortunately not detailed anywhere in the in-game guide. Impact reflects how hard you hit an enemy, which allows you to topple them over before their health bar is depleted and leave them open for a huge follow-up.

This has enormous influence over combat encounters. A high Impact stat will allow you to knock down enemies with uncharged power attacks, depending on how big they are. Impact is almost just as if not more important than the Power stat itself, as knocking over enemies essentially condemns them to death because you can follow up with nearly any attack, including a grenade toss. This makes Power a build that’s easy to use and build for, since all heavy weapons have a high Power affinity and increase the Impact stat.

A good Power weapon is one that can hit from long range with a fully charged attack. To this end, the Gribeauval Halberd you’re able to pick up at the beginning of the game is one of the best. It has a high Impact stat and relatively fast normal attacks, with a solid special attack that can add some added Impact to the end of your combos. However, any heavy weapon with a high Power Affinity works well if you know how to land a fully-charged power attack since you’ll almost always score a knockdown on any foe that isn’t giant.

Looking through weapons, you may notice a few Baton types and Dual Blade weapons may seem like they have an acceptable Power affinity. Unfortunately, while not useless, these weapons aren’t the best for a Power-type build. Many lack a significant Impact stat and have a hard time knocking enemies down, which is the bread and butter of the offense in a Power build. If you’re looking for a heavy weapon with a fast attack speed, try chain weapons such as the Fire Chain.

Power is the most straightforward build you can choose because the most important choice is your weapon. However, the greatest compliment to this build is another vague stat called Balance. Balance is the central defensive stat of the Power build because it represents Aegis’ ability to withstand enemy attacks and stay on her feet. This is important because charged-up power attacks are essential to the offense of the Power build and without a good Balance stat, enemies will knock you out of your attacks or even force you to the ground.

Though putting points in Endurance improves the Balance stat, you’ll want to look for this stat on modules and armor as well. This is because putting a stat point into Endurance only gives 4% to your Balance score, which is a rather slow climb. Other than emphasizing Balance, a few key consumables make exerting your power incredibly easy. These include Fulmination Grenades, since electricity debuffs increase damage received, and Ice Grenades to get a free hit in on faster opponents.

Though Power based weapons sometimes find themselves crossing into the Alchemy build, it’s not advised to focus too much on any of them. Most of these sacrifice their Impact stat for the ability to use an attack that charges your weapon with an elemental power, which conflicts with times you want to launch a fully-charged power attack because they are so slow. This means you should rely on grenades or weapons such as the Charleville 1798 Shield Musket when you want to apply debuffs to your enemy.

A Power build is the most straightforward way to get through Steelrising. Once you get the hang of swinging huge weapons such as the Gribeauval Halberd or the Body of Work, you’ll be knocking enemies over with ease by the time you finish the tutorial at Saint Cloud. The huge offensive prowess of the build never feels like it wanes at any point of the game, and by the end of it you’ll be able to knock over even bosses you come up against. With an accessible learning curve, playing with Power is both fun and easy.