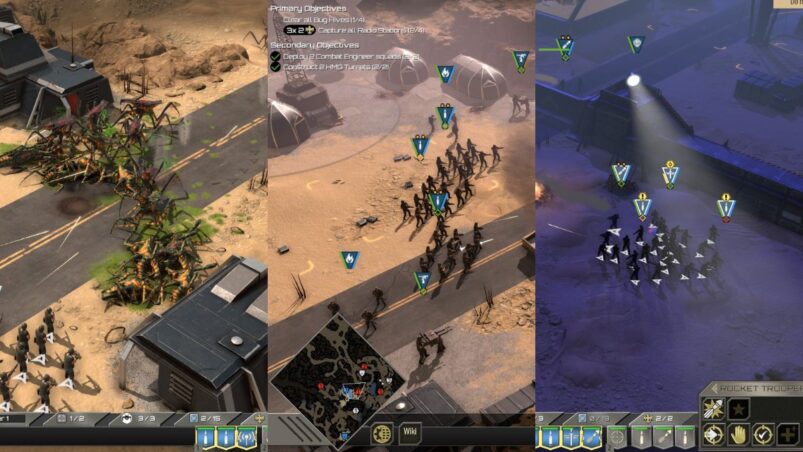 Starship Troopers: Terran Command is a hectic and tense real-time strategy game where you’ll need to do your best to repulse hordes of Arachnids and push them back to the hidey-holes they came from. It’s quite a challenging game with plenty of scenarios to keep you on your toes, guessing what new threats you’ll need to face. So as not to have you go in blind like the Mobile Infantry (MI hereafter) in Operation Bug House, here are a few helpful pointers to get you started.

While most of the frontline combat units of the MI can take care of themselves with their automatic ranged weapons against sparse resistance, when hordes of Bugs come a-knockin’ simply shooting at them is unlikely to keep your forces safe enough. Active abilities, such as grenades, gunship support, and flame grenades, are crucial to delaying and clearing out large numbers of bugs by causing lots of burst damage or stunning them so that you can deal with other threats. Especially on higher difficulties, it’s basically essential to use your troops’ active abilities to succeed.

Over the course of a mission, new Bug types will come crawling out and aid their brethren in taking down the Federation. Friendly units, such as Rocket Troopers and Snipers that have special weapons are best used against targets they’re most effective against. When an engagement starts make sure to command units to fire at targets they are best suited for, so that you’re being efficient with your firepower.

The Arachnids may only have one formation on their mind, but that doesn’t mean you have to follow their lead. The MI fights most effectively when all their different teams and squads are fulfilling a purpose and utilizing their superior ranged fire to thin the hordes of insects. This means forming up your troops in a formation to maximize firepower and protect weaker teams, like Radio Operators and Tactical Officers is crucial to succeeding in any given skirmish.

Watch Out for Tanker Bug Spit

The Bugs will oftentimes throw wrenches into your perfect battle lines and formations and the king of that is the Tanker Bug, a behemoth of a creature that’s excellent at disruption. Though it may look imposing, it will often stay at short and medium ranges to spit hot flames at your forces.

The problem with the Tanker’s spit is that unlike typical flames from flamethrowers or flame grenades that mostly stun and block, but deal no damage, its flames stay in an area for a decent amount of time dealing massive damage to anyone moving through them. When the Tanker gets ready to spit make sure to quickly reposition and avoid the lingering flames until it dissipates.

Rifle Troopers will likely be your most common frontline unit to suppress and hold off the Arachnid onslaught. When they reach level three of experience you can choose to give them another active ability either underslung shotguns or a powerful demo charge with a relatively short cooldown. The shotguns are generally superior to the demo charge as they fire quickly and stun bugs in an area around the squad, buying you time to either move or have other squads move in to support and deal with the horde.

While the mobile in Mobile Infantry may imply that speed is critical to their strategy, in actuality, patience and methodically advancing from one defensible area to the next is far safer and advantageous. The Bugs aren’t going anywhere and more often they’ll be coming to you, so preparing your forces to face them in locations where you have the advantage is always preferable.

Starship Troopers: Terran Command is a micro-intensive game that’ll test your ability to issue orders quickly and precisely. As such, it’s absolutely essential to assign your units to control groups and learn the hotkeys for activating abilities, because a situation can drastically change within the span of a few seconds and you need to be able to respond.

Compared to the original source material, MI in the game aren’t exactly individually mobile, but are strategically mobile, especially when you have map control over the vital radio stations. MI squads can use landing zones to call-in dropships to quickly reposition to another one if the situation demands it. This makes Radio Operators and Fleet Liaisons highly valuable for any offensive force so that they can lay down a landing zone and help your troops redeploy to a critical combat area.

Just like the Arachnids, your manpower resources are basically infinite, limited only by supply depot availability, allowing you to call in fresh squads of soldiers without recompense, as when a squad perishes or leaves it refunds its supplies. As a scenario evolves, new bug threats emerge, and you get access to new units, it’s recommended to disband squads you don’t need, even veterans, to free up supplies for more useful and powerful troops to better fight back.

Rocket Troopers Are Your Friends

While Warrior Bugs may be the most common threat and they’re legitimately scary when they get close, it’s those advanced Arachnid types that really throw a curveball at you. Most of these Bugs, like Tiger Bugs, Royal Guard, Scorpions, and the aforementioned Tankers, are all armored to some extent and will make standard rifle fire highly inefficient. Rocket Trooper teams are your most effective tool for dealing with these tough nuts, as well as structures, so be sure to run at least one or two teams per fighting force.

Watch Your Lines of Fire

Since the MI relies on ranged firepower to keep the Bugs at bay, line of sight and clear lines of fire are crucial to maximizing your damage and suppression potential. You can see a red, yellow, or green indicator just below the unit icon that indicates whether their line of fire is blocked, obstructed, or clear, respectively.

These indicators matter more for direct fire units, such as squads and teams armed with automatic rifles or machine guns, but since most of your troops will be such units, keeping tabs on how everyone is positioned may be a matter of life and death. Try to make sure that all squads have a green indicator when shooting at incoming Bugs.