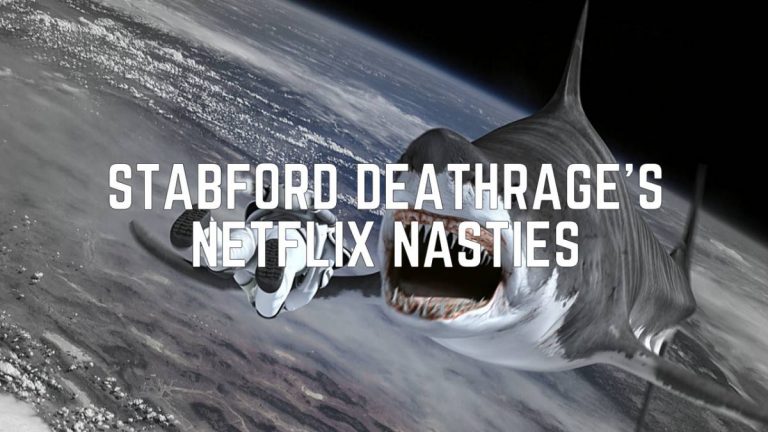 Sharknadoes destroy large chunks of the Eastern US, and David Hasselhoff goes to space in this third installment of the stormy franchise.

As the country is placed under something called a ‘significant weather advisory’, Fin Shepard, played by that dude from 90210, runs to his meeting with politicians. To escape a crowd of people inexplicably protesting weather conditions, Fin dramatically jumps on the hood of a car that’s seen a few takes. Then there’s more running.

After receiving an award in the form of a working golden chainsaw, the probably-pretty-common variety of freshwater Potomac River sharks are sucked up into a tornado. Vice President Ann Coulter says, ‘I feel for the sharks but they’re messing up our roads’, and if Ann Coulter is ever elected to public office in America I think roads are the least of our worries. Sugar Ray says some stuff, Jackie Collins says some stuff, and Lou Ferrigno takes a selfie.

As the storm approaches, Fin says he can smell the sharks, which seems fishy. Projectile-like sharks smash through marble monuments, and then land on flimsy tables, ruining perfectly good hors d’oeuvres in a surprising paradox. In an unlikely turn of events, Sugar Ray and Ann Coulter surf down shark-infested stairs while riding oil paintings of presidents. It’s fine, they probably chose the less-memorable Democrats. Fin says, ‘We’re going to need more firepower than that’ and points at a sword.

The surviving characters recreate the iconic photograph of Raising The Flag At Iwo Jima. If you’re going to ask me if I think that’s in bad taste, well, you’re barking up the wrong tree because I’ve watched all three of these movies and I obviously can no longer be trusted in such matters. Then the opening credits roll. Yes, I know what you’re thinking, and yes, unfortunately, there’s about 80 minutes of movie remaining.

During his trip to Florida to meet up with his family, some radio personalities accuse Fin of somehow being responsible for the shark-filled storms as if meteorology is a 90120-created conspiracy. Localized and unrealistic fog surrounds Fin’s car as extras flee in terror.

Suddenly, Fin meets up with Nova, his unrequited and busty leather-clad love interest from the other films, which seems to annoy the kid from Malcolm In The Middle. Maybe I shouldn’t call him a kid, since he’s 30. Anyway, Malcolm In The Middle’s limbs are slowly devoured, and since he’s dragging himself along the top of an RV by his last remaining arm, he is forced to press a button with his face. Then he explodes.

Suddenly, in yet another moment of product placement, there’s a Nascar pile up of race cars and sharks. Fin and Nova’s jet crash-lands in a picturesque pool at Universal Studios, which causes them to lose most of their clothes. Thankfully, they packed some extras, you know, just in case something like that happens. I’m not sure when they had time for a costume change, considering all the gruesome death from flying sharks, but I guess they did. Somehow in a film where cyclonic sharks are plentiful, we are asked to believe the unbelievable, as a teenager leaves behind a cellphone at a theme park.

The cast takes an airborne ride in the Universal Studios metal globe sign, which is probably pretty safe and would be the first place recommended by the NOAA to hide from a tornado. Then they steal race cars to drive to Cape Canaveral because those get really good gas milage, and a Real Housewife From Witch Mountain gets smeared on the sidewalk by a shark. Fin has lunch with his dad David Hasselhoff in one of those train-car diners, only all the venetian blinds are closed in a signature Asylum move.

Seriously, you can bet on two things in Asylum films: One, a helicopter will appear and it will crash, and Two, venetian blinds are always closed. Go ahead and check, I’ll wait. Meanwhile, someone says the unlikely phrase ‘Sharknado Haboob’. The National Guard protects the Space Shuttle by shooting airborne sharks, which isn’t as good at diverting them as you might think. Fin goes through a rigorous 2-minutes of astronaut training, April conveniently skips it, and Nova uses a knife-tipped mascara shotgun.

After the Reagan-era Star Wars tech Hasselhoff suspiciously created is initiated, an extra is seen wearing Asylum swag. Then there are incredibly unlikely sharks floating about in space, and even the cast seems surprised by this. Fin uses a probably-not-Lucasfilms-approved lightsaber chainsaw, and I’m not sure if those are considered standard equipment by NASA.

The Space Shuttle is destroyed by ricocheting sharks in space, and it crumbles like the ISS in Gravity. After being eaten alive yet again, Fin and April ride back to Earth in a pair of outer space sharks. Falling miles through the stratosphere, the sharks’ bodies charred from reentry, one of which has parachutes shooting out of its back, they somehow land smack-dab in the middle of the theme park in a miracle of space flight. April gives gooey, unconvincing birth within the shark as though someone doesn’t know how labor and delivery works. The film ends a few times with Hasselhoff on the moon, its surface littered with shark corpses.

Sharknado literally shoots for the moon in an attempt to outdo the previous films and falls flat, while ads for Universal Studios, Lumber Liquidators, the Today Show, Fossil, Subway, Bud Lite, XFinity and the GOP substitute for plot development. The Sharknado franchise is rapidly becoming the modern day Love Boat of tornado shark movies, trotting out 83 credited cameos from celebrities, former celebrities, politicians, and at least one convicted felon. Still, it’s recommended if you like stuff that sucks.