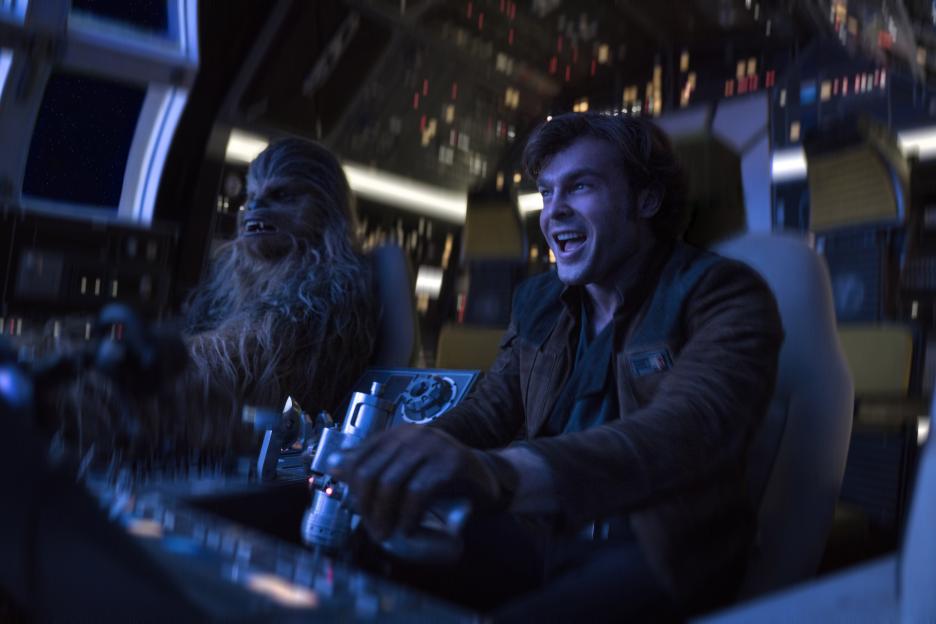 Man plans, Disney laughs. Some asked, do we really need an origin story for Han? Part of his appeal was his mystery. He was the charismatic bad boy with a shadowy past who showed up when he was needed, and won us over by sticking around to fight for what was right. Wouldn’t learning more about him also lessen his appeal somewhat? Then there was all the drama surrounding the production, from the script to the many firings, which few movies emerge from unscathed. Last but by no means least, there was the role itself. How could a star play such an icon while also giving his own take?

Throughout, Disney laughed and laughed, and it’ll continue laughing as we enjoy Solo: A Star Wars Story, another film we didn’t know we wanted. Harrison Ford’s Han Solo will always be, well, Harrison Ford’s Han Solo. But damn it, Alden Ehrenreich does do the impossible. He does make us recognize his Han Solo without becoming a pale imitation of the original. And he does bring a charm all his own. It’s long been evident in failed franchises like Beautiful Creatures, as well as smaller roles in indies such as Hail Caesar, but here his considerable talent gets to be put on full display, and Ehrenreich not only rises to the challenge, he relishes it.

The story begins by exploring Han’s origins on a bleak planet where orphaned children steal on behalf of a lethal protector. He manages to escape, but his love, Qi’ra (Emilia Clarke), gets left behind. He vows to return, but years later he’s still a foot soldier in the Empire, entangled in their wars without any belief in what they’re fighting for. That changes when he meets a group of mercenaries who not only offer him an escape, but also his first steps on becoming the most lovable scoundrel in the universe, complete with a secret heart of gold. Not to mention a gambler named Lando Calrissian (Donald Glover) who also has a certain ship in his possession that becomes very dear to Han. It’s really one of two love stories in the film, neither of which is with Qi’ra. The real bonds are the ones Han builds with his ship, and the one who will become his lifelong companion, Chewbacca (Joonas Suotamo).

Much like in his original appearance, Lando becomes both an obstacle and an asset to Han’s growth. Or it would be more accurate to say that it’s Glover who throws a kind of wrench into things. Ehrenreich does great work, but he’s also starring opposite a charismatic powerhouse who is so damn fun to watch he threatens to steal the movie. Not only from Ehrenreich, but from everyone.

Luckily, Glover’s around enough to remain a scoundrel while nevertheless confirming that he does have a heart, which, much like Han’s, won’t be put to full use until later in life. But for now, they are young, reckless, and ready to go on an adventure in a darker and more chaotic time in the galaxy. Unlike the heroes in other Star Wars movies, these people aren’t trying to fight the power, they’re trying to survive long enough to make it out of their desperate circumstances to a better life. Of course, some of those pesky do-gooders might just show up and give them another option, which not everyone will be willing to take.

It’s all delivered with what has become Disney’s trademark blend of humor and action, even if there can’t be as many surprises as other films the franchise has given us. Solo: A Star Wars Story really tries to up the stakes by killing off a few lovable side characters, but it feels rather unnecessary, especially in how it doesn’t add too much depth and emotion to the survivors. Clarke especially is able to infuse Qi’ra with enough of a mixture of doubt, passion, and jaded pragmatism to leave us wondering as to both her next action and ultimate fate, while Woody Harrelson also charms as the reluctant mentor who teaches Han to always shoot first.

It might not pack nearly as big a punch as Disney’s other offerings, especially fresh off the emotional devastation that was Infinity War, but Solo: A Star Wars Story is still a journey worth taking.

Verdict
Disney tells us how Solo first went rogue in the entertaining Solo: A Star Wars Story.
8
Cultured Vultures is a pop culture website established in 2013 covering all things gaming, movies, and more. We eat your words.
All The News On The Biggest Games