Invasions Could Be Sniper Elite 5’s Ace In The Hole 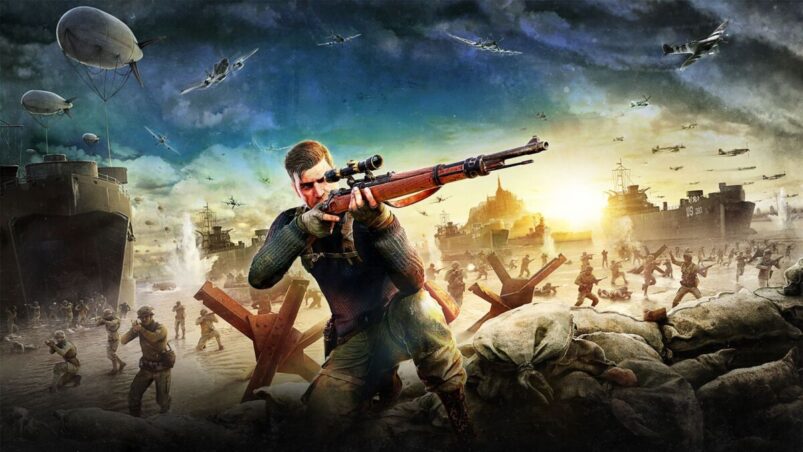 As online and multiplayer gaming have become more prevalent within the industry, one specific type of player interaction has found its way into various different types of games: invasions. You’re out there, minding your own business and trying to complete a certain game, when all of a sudden, a rival player jumps in to try and ruin your day. Either they succeed, or you send them packing.

Truthfully, invasions aren’t usually my bag. They’re often a nice novelty mode, but the gimmick typically gets old before too long. It feels like invasions often leave you susceptible to being invaded by higher level/skilled players, which can feel quite disheartening. It’s why my Elden Ring playthrough barely touched the online modes, largely because people who invade often in Soulslike games scare me. They’re usually way better than I am. My Deathloop playthrough also ended badly, after a more powerful invader ruined me completely and I rage deleted the game.

Seeing that Sniper Elite 5 would come bundled with an Axis Invasion mode was enough to make me roll my eyes. The idea of my stealth adventure around France, shooting Nazis in the balls every chance I could get, would be interrupted by some sweaty tryhard with an itchy trigger finger wasn’t exactly the most enticing in the world, but after spending a few hours with the game, it could genuinely be Sniper Elite 5’s ace in the hole.

Invasions in Sniper Elite 5 work exactly how you’d expect: At any point during a level, you can be waylaid by an Axis Sniper Jager, another player with similar weaponry and abilities to you. While the weapon loadout can have some subtle differences, every Axis Sniper Jager has the same ability loadout, ensuring that invasions are always on even enough footing. They’re more of a test of skill than they are a case of a high level player coming in and battering you everywhere.

As I started reviewing Sniper Elite 5, I decided to leave invasions on for the sake of knowing what it’s like, and it didn’t take too long for me to find out for myself. During the game’s first level, after about an hour of clearing secondary objectives and collectible hunting, the notification popped up on screen: “You have been invaded by an Axis Sniper Jager”. What transpired during the game’s first level would prove to be the most fun I’ve had with any invasion game type.

Sniper Elite 5’s levels are decently big, so there’s plenty of room for a tense, cat and mouse game between two skilled snipers. As the person being invaded, you also have a couple of tools at your disposal to gather intel on your invader. On controller, holding the right stick activates focus, which reveals enemies and items in a short radius around you, but also highlights a portion of your radar in red, to give you a vague idea of where the invader is. You can also use telephones to get an exact location of your invader, though your invader will be notified that they’ve been revealed.

After being invaded, my immediate port of call was towards a telephone to see where the invader was. “600 metres away,” said the game, and with plenty of cover between me and the invader, the only thing to do was close the distance. After using the focus ability to approximate where the invader was, I happened upon a farmhouse currently occupied by Nazis. Clearing those out was more tense than usual due to the fact my face could have been blown off at any time by the invader, but the invader didn’t make their move yet.

They were, however, getting close; close enough that the focus ability had gone from showing me a vague direction on the radar of where they are to having the entire circumference of the radar light up red. The invader was breathing down my neck and there was nothing I could do about it except prepare. This farmhouse was to become my Alamo, a defensible bastion against another player intent on tearing me to shreds.

With a few sly mines placed in the kitchen of the farmhouse and the upstairs landing, I retreated to the adjoining barn, hoping to catch my hunter in a trap of my own making. Before long, the focus ability revealed a would-be Ash murderer trying to sneak their way around the farm. Suddenly, twenty minutes of built-up tension had transformed into elation: I had the drop on him, and he was going to pay. Lining up my SMG with the bottom of the stairs, I waited for him to pop around the corner and then pulled the trigger. The invader was dead, and I’d come out on top.

Being able to outwit and outmaneuver another player in such a way is an incredible feeling, even if I didn’t necessarily live up to the “Sniper Elite” name by instead riddling the invader’s body with Tommy Gun bullets. Completing an invasion gives you a sense of confidence that you carry through the rest of the level. Admittedly, the next few objectives were completed a bit more recklessly. I’d already beaten the best this game has to offer (other players), so what was going to stop me?

Arriving at the main objective, I’d already made the mistake of alerting everyone in the area to my presence. Alarms were blaring throughout the French countryside while about a dozen Nazi soldiers were lining up for their shot at the king. It’s not ideal, but at least it couldn’t get any worse, right?

“You have been invaded by an Axis Sniper Jager.”

Invasion number two was certainly more panicky and scrappy than the tense, cerebral affair that the first invasion was. An invading player felt like the culmination of this series of unfortunate events that I’d managed to find myself in. If the soldiers surrounding me weren’t going to be the ones to finish me off, Hans Von Silent Scope hiding in the hills was probably going to do it.

Hope was in short supply, but after clearing out the immediate area of soldiers, I trained my sights on the big radar tower at the top of the hill. Something was moving around pretty quickly, and hovering your crosshair over a target reveals what they are and tags them for you. It was the Axis Sniper Jager, either looking for me at the objective or trying to get a good vantage point. Tagging him must have triggered some kind of notification on their end, because as soon as I did, they turned tail and ran as quickly as they could. If I didn’t take the shot now, I’d be stuck in this cat and mouse game for longer, so I went for it.

One of Sniper Elite’s main selling points has always been the slow motion bullet cams and X-Rays, cinematic moments on select kills designed to showcase the damage you’ve inflicted on the Nazi scum stood in your way. During invasions, you’ll get bullet cams, but they’re incredibly brief because you’ve got another player in your game. If you manage to land a kill-shot on another player using a sniper though, you’ll get the full, slow motion kill cam, and knowing it was on another player feels twice as glorious.

I pulled the trigger and watched as the bullet flew over fields, through fences and between bulkheads to pierce the back of the invader’s skull, just underneath their helmet. As sniper shots go, it was about as perfect as they come, but being able to savor that slow motion kill cam felt like the equivalent of a victory lap. All of the stress of the invasion led to the ultimate catharsis when, from the jaws of defeat, I was able to get the win.

Even invading other players is just as enjoyable, despite the fact that the shoe’s on the other foot. Going from hunted to hunter is a completely different experience, but one that leads to immense satisfaction if you manage to pull it off. Being able to stalk your prey from high ground, watch them try and take on various enemies, only to pull the trigger when they think they’re safe, is utterly brilliant.

It’s not going to be a mode for everyone, though the premise of two snipers trying to pick each other off arguably lends itself better to an invasion mode than other games. Fortunately, it’s also about as optional as they come. There’s no storyline benefit to having invasions enabled, they’re just another way to make the game harder for yourself, with the benefit being more EXP per objective completed while invasions are enabled. If you want to level up your abilities quicker, invasions are the way to go, but there’s no penalty to turning them off either.

With five entries in the series at this point, including a standard multiplayer mode that’s never received a lot of attention, Sniper Elite needed to add something new and interesting, and the invasion mode appears to have done that job fantastically. The core game itself is still great, but the invasions might be what keeps Sniper Elite 5 in the public consciousness for the next few months.