Skyrim & Grief: The Distraction Of Adventure

Grief is a tricky thing to deal with, but sometimes all you need is a distraction. 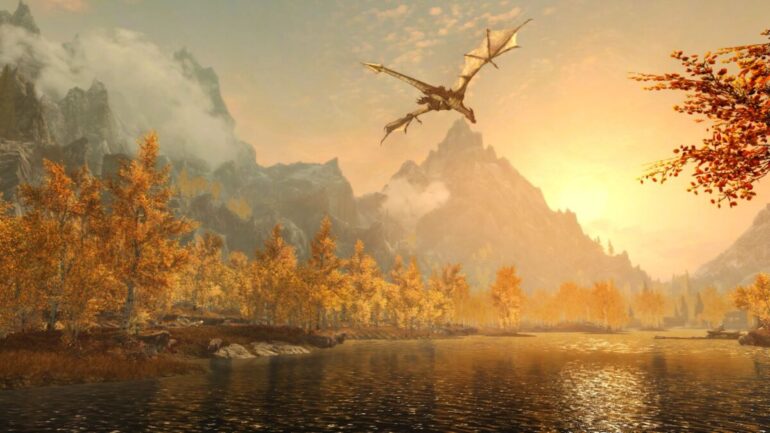 Disclaimer: Before we get started, this article is quite the personal piece, and touches on sensitive topics such as cancer and death. Ahead of publishing, the copy was also shared with those mentioned to ensure everyone involved was okay with what’s been written. The last thing I’d want to do is be disrespectful during a time like this. With that being said, I hope you enjoy this piece.

Allow me to set the scene. It’s about 2 in the morning, and I’m playing Skyrim while sitting next to my girlfriend, Danii. As has become commonplace with our late-night/early-morning Skyrim escapades, I’m about to do something stupid.

D: “Ash, what are you doing?”
A: “I’m gonna go kill that giant.”
D: “With a bow and arrow, despite running a two-handed build?”
A: “Sure! It’ll go great, I’ve done it befor- nope, never mind.”
[On-screen, my now-lifeless husk has been clubbed so far into orbit that SpaceX put out a press release denying all knowledge of this unplanned launch.]
D: “See, Ash? I told you. [Danii has now noticed I’ve loaded back into the game and I’m sprinting at the giant for round 2.] Wait, what are you doing?”
A: “Danii, I can do this. Just you watch, I’m gonna Hawkeye this thing.”
[The Giant steps up, club in hand, ready to swing like Kazuma Kiryu hitting the batting cages. With a mighty thud, my Skyrim character, Hector The Well-Endowed, has discovered that his generous endowment will not stop a giant from bouncing him into the atmosphere like a coiled spring.]
A: “Oh, the bow and arrow only worked on mammoths, didn’t it?”
D: “Yup.”
A: “Okay, warhammer it is.”
[Elven Warhammer in hand, Hector smacks the knees out from under the giant, making Tonya Harding proud.]
D: “Well done, Ash!”
A: “Thanks, but why is the music still- FUCK, WHY IS THERE A DRAGON NOW?!”

While the above conversation might not have been retold in the most accurate fashion, what with me not being a stenographer, conversations of its ilk have become a regular and wonderful occurrence between myself and my girlfriend over the past few days. Both of us have enjoyed Skyrim ourselves in the past, but recent tragic events have led us to seek solitude in, well, Solitude.

At around midday on Thursday, January 28th, Danii’s mother passed away after an over year-long battle with cancer. The fight looked to be going well for a while, with multiple bouts of chemotherapy and radiotherapy along with an operation on her brain to remove a large chunk of cancer this past summer. The surgery and chemo appeared to be a success, but after a few months, it rapidly grew in her brain once again, ultimately claiming her life.

There’s something profoundly harrowing about watching someone you love be consumed by brain cancer. Between the tumour affecting her faculties anyway, along with the laundry list of treatments prescribed to her, she spent a large majority of her final months as a shell of her former self.

Without getting into specifics, there were multiple instances that led to both myself, Danii and her sister feeling frustrated and angry as we did our best for her. There wasn’t any comfort to be found in the idea that “it wasn’t Danii’s mum anymore, it was just the cancer making her act a certain way”, as that cancer was still wearing her face. Even if they’re not in control of their words and actions, they can still leave a lasting impression. What makes it even more heartbreaking are the moments in between, where she realised that she wasn’t fully there and practically punished herself for not being stronger.

Naturally, this entire struggle has left us both feeling empty, and lacking in motivation to engage in our primary shared passion of video games. Before all this, myself and Danii had played a lot of Skyrim together already, but after the random bit of inspiration to play it one night after her mum’s death, we both found the game to feel especially cathartic. This isn’t a “I found a dying mum in Skyrim, and doing a quest for her made me feel things” type of article, this is purely about the escapism and experiences that large, adventurous video games can offer.

On the same day that she died, Yakuza Remastered Collection launched on the Xbox. It’s a series we both love on a console we both enjoy, but something about becoming emotionally invested in its story felt too overwhelming at that moment. It’s an issue we haven’t run into with Skyrim, as instead of focusing on the grand, operatic storyline filled with mystery and intrigue, we found joy in the smaller missions and the adventures we chose to make along the way. As weird as this might sound about a grown adult talking about a video game, it gave us purpose.

Running our own separate playthroughs, taking it in turns to play, highlighted how vastly different our styles of play are. Watching Danii play gave me a new perspective and appreciation for the Thieves Guild quests, as she travelled from city to city, robbing everyone in sight. The only reason she stopped was because she had a quest to plant a stolen emerald in Heimskr’s house in Whiterun, which became inaccessible because she’d already completed the Civil War questline. That was a fun “reload last save” right there. 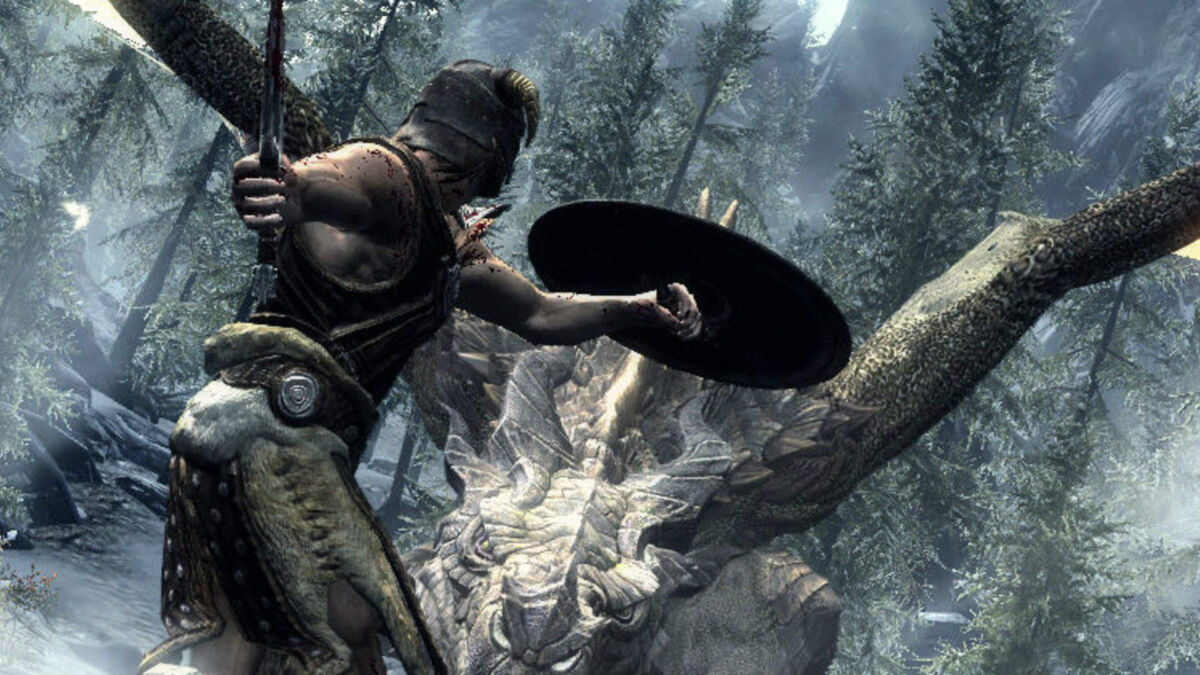 Speaking of weird glitches, my playthrough opened her eyes to some of the more abusable exploits that Skyrim has to offer, like the fact you can infinitely hit stealth attacks on the Greybeards to level up your sneak, or that there’s an invisible chest in Dawnstar that lets you access the wares of one of the travelling Khajit caravans without stealing any of the items. It’s not a crime if one of the city guards doesn’t say “stop right there criminal scum”. She also got to see me tear hearts out as the world’s ballsiest werewolf, a strategy that always worked.

Our separate playthroughs have also allowed us to collaborate better. Having thrown a bunch of resources towards smithing, alchemy and enchanted armour and weapons, I’ve been able to help Danii broaden those skills with her character, achieving quicker level ups as a result. Meanwhile, when I’m playing, she can take the controller off me to kill those awful frostbite spiders whenever I’m too much of a scared little bitch to kill them myself.

We’ve even been basking in the random, emergent gameplay that comes with a world as expansive as Skyrim’s. One particular flight of fancy involved an encounter with a mercenary outside of Windhelm while Danii was playing. Said merc was struggling to deal with two ice wolves, which were quickly dispatched with a bow and arrow. Turns out Danii is much better with the bow than I am.

After killing the wolves, the mercenary mentioned he was investigating trouble nearby, to which she offered to help him. The merc, who was yet to learn about pride coming before a fall, declined the offer to help and walked off, but Danii decided to follow him to this commotion, only to find that this issue he was meant to investigate never seemed to materialise. 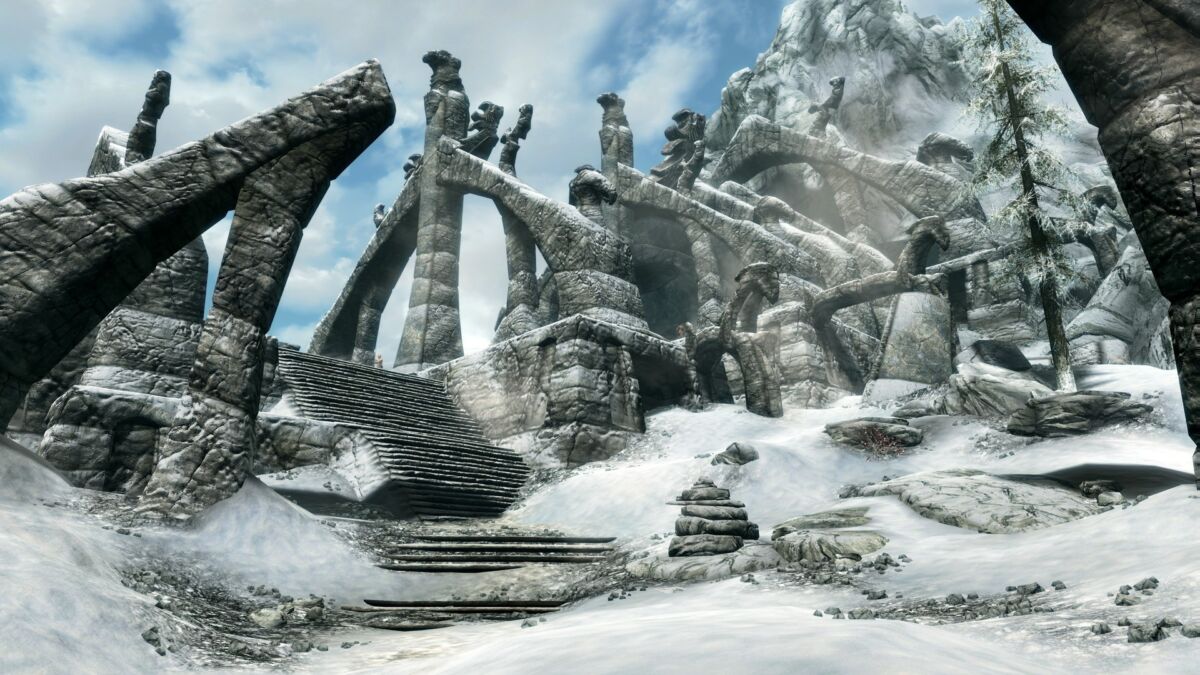 We followed this guy as he wandered around Skyrim, through Kynesgrove and across other areas of the map. We walked past a couple of Alik’r Warriors harassing a Redguard woman in the middle of nowhere, thinking this must be what he’s investigating, but no. He wasn’t even interested in the giant and two mammoths that stood near the Redguard commotion. Unfortunately, we’ll never know where he was meant to be going, as he charged headlong towards a sabre cat and got mauled in two hits. Remember kids: never be too proud to accept help.

These adventures in Skyrim, or misadventures in the case of that mercenary, have allowed us to focus on conversations and memories that aren’t just related to funeral arrangements and issues that we’ll have to deal with in the future. Those conversations are important, and we’re making a conscious effort to not bury our heads in the sand, but Skyrim has given us a brilliant way to find breaks in the meantime. If nothing else, it’s reminded us that there’s still some essence of normality in our lives that we can savour, even if it feels like everything else is crumbling.

On top of that, it’s been comforting to me watching someone I love so much still manage to find joy in what’s undoubtedly the worst time in her life. Being able to share a giggle regarding the constant parade of weird interactions and moments that Skyrim offers is a beautiful signifier of how strong she truly is. I admire her greatly, and I intend to spend a long time letting her know it.

The sheer scale and imagination on offer in the world of Skyrim have allowed us both to escape to a world that’s a bit more magical than this one right now. The ability to have a laugh as we shout Fus Roh Dah at a bard, throwing them violently off a cliff, certainly isn’t enough to heal the wounds we’re dealing with right now, but it’s a great reprieve when things are just a bit too much.