Bully me in the comments, I guess. 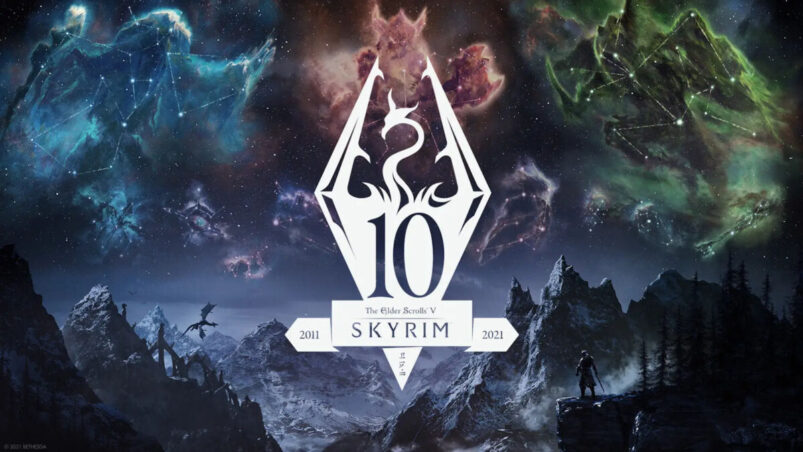 It’s a meme at this point that Bethesda, and I guess more specifically Todd Howard, just love rereleasing Skyrim on whatever console they could think of next. They’d probably consider chucking the classic RPG adventure on the Nokia N-Gage if they believed it would turn a profit. Which, you know, it would, because the N-Gage is the greatest gaming device in existence. Obviously. Second best is the Ouya, but it’s a close one. Really, I’m shocked it hasn’t been ported over to Stadia yet. Not even as a prank. It’s such a missed opportunity.

Sarcasm aside, it’s no secret that we’ve seen Skyrim make the jump to new consoles pretty often, and it seems Bethesda are leaning into that. During QuakeCon, Bethesda announced Skyrim: Anniversary Edition for PC, PS4, PS5, Xbox One and Xbox Series X | S. With this new port, Bethesda have even managed to surpass Capcom’s constant re-releases of Resident Evil 4, which is impressive in its own right.

With all the re-releases of Skyrim, you’d think that most people would be sick to death of the game, wondering what’s the point of bothering with yet another version of a 10 year old RPG. That sentiment is certainly out there, especially among one or two of my friend group, but there’s also some excitement for this new version too.

Skyrim appears to be making genuine moves towards adding content that players have wanted for so long, with already announced features including fishing, a survival mode, and some new quests. These features are even being bundled together as a free update for players who already own the Special Edition of Skyrim, so even if you’re not enthused about the idea of splurging even more money on even more Skyrim, there’s still new content to get excited about.

However, the real reason to get excited about the Anniversary Edition specifically — at least as a console player — is because they’re bundling together over 500 pieces of Creation Club content with the game. The Creation Club is Bethesda’s own modding storefront that allows players to upload their own mods to the game that players on PC, PlayStation and Xbox can play around with.

It’s a versatile system that allows players to really maximise their enjoyment of Skyrim, and indeed Fallout 4 too, and the decision to include PlayStation and Xbox within the modding community in that way was a masterstroke. However, using mods like this disables achievements and trophies, and for players like me who attribute their worth as a person to a bunch of meaningless numbers, mods aren’t worth the sacrifice. For PC players, this really isn’t so much of an issue as modding is such an ingrained feature that most players are used to them already, so it’s understandable why the excitement isn’t quite so feverish in that respect.

The hope is that if Bethesda are curating hundreds of individual pieces of player-made content to put into the game as part of an official release, then surely they’d allow achievements and trophies to be enabled while using this content, or at least when using some of it anyway. You’d think that Bethesda wouldn’t intentionally throw content into the game that breaks everything, so if it’s good enough for a proper, packaged release, surely it’s good enough to allow me to get bigger gamer numbers.

On top of that, while Skyrim: Special Edition was a fun collection of all the previously released DLC that was updated to look a bit shinier, there was no new content to play around with. If you’d already finished Dawnguard, Dragonborn and Hearthfire in the original releases of the game, there was nothing new to see with the Special Edition, besides some god-rays and upgraded textures. They’re nice to look at, but it’s just a new coat of paint on the same game.

While Bethesda are leveraging player-made content in order to do it, this is the first re-release of Skyrim that will contain new, officially licensed content for a large majority of players instead of just repackaged DLC that you may have missed. Some might have seen the Creation Club content already, so this release won’t be too exciting, but for the first time in 10 years, the majority of players on console will be able to explore Skyrim and actually find something new, and for someone like me who has a special place in my heart for this game, that’s a wonderful feeling. Again, PC players have been able to create new content for themselves for the past 10 years, but as a console luddite, I’m pretty happy.

Look, I understand: I’m part of the problem. “Bethesda wouldn’t keep re-releasing Skyrim if people didn’t keep buying it”, and here I am simping over yet another version of the game, but there’s potential here for Skyrim: Anniversary Edition to become the definitive version of this iconic RPG. And hey, if you’re not bothered about Anniversary Edition, that free fishing update, new quest and survival mode for the version you already own is nothing to sneeze at. There’s even a free next-gen upgrade coming too, so the Anniversary Edition is about as optional as it gets. If you don’t want to bother with it, you’ll still have something new to play with without spending anything.

If nothing else, a significantly updated version of Skyrim with more content to muck about with is a more tantalising sell than the next-gen version of GTA V, which is also launching on November 11th. Considering that GTA V seems to only be offering updates to the GTA Online portion of the game, with nary a hint of what new content could be added to the single-player campaign, I know which re-release is more enticing for me.