Should I Give Dragon’s Dogma: Dark Arisen Another Shot?

Can you pet the dog(ma)? 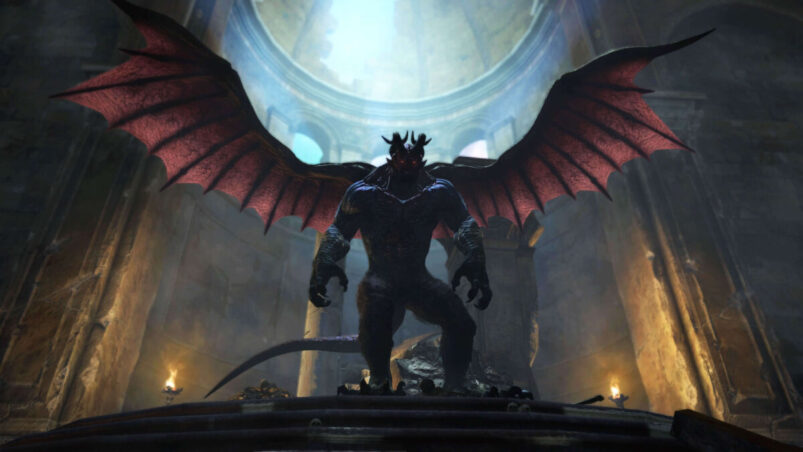 Every now and again on this fine website, I’ll whip up an article that proves how my gamer cred should be revoked. I’ve spoken at length about how I couldn’t get into either Hitman or The Legend of Zelda: Breath Of The Wild, but there’s another game that’s been sitting in my backlog for years, waiting for another chance, and that’s Dragon’s Dogma: Dark Arisen. With a sequel having finally been announced by Capcom, is now the time for me to give it another go?

While Dark Arisen has been in my backlog for a while, I did play the original game on Xbox 360 around a decade ago, but for whatever reason, I don’t have fond memories of it. I remember starting the game, fighting a chimaera, getting my heart ripped out by a dragon, making a pawn that looked absolutely terrible, then getting frustrated escorting some merchant lad to the capital city. I didn’t get much further than that.

It’s disappointing, because even back in 2012, Dragon’s Dogma was being described as some sort of unholy fusion between Devil May Cry and Skyrim, which are ultimately two of the best games ever made, so seeing them smushed together sounds like a match-made in heaven. For whatever reason though, Dragon’s Dogma just didn’t grab my attention. Looking back, I’m partial to blaming both my second year of uni for being hell, and Metal Gear Rising: Revengeance for being too hype.

In the years since its release, Dragon’s Dogma (and its subsequent Dark Arisen re-release) has gained somewhat of a cult following among RPG fans as one of the most underrated and under-appreciated RPGs of all time. In the eyes of the DD faithful, the game deserves to stand shoulder-to-shoulder with the giants of the genre, including Skyrim, Dragon Age and others.

Really, it’s this fan sentiment that has driven Capcom to announce a sequel, on the 10th anniversary of the game’s release. Considering how miserly Capcom can sometimes be when it comes to celebrating some of their cult classics (we’re still waiting for a new Power Stone, Dino Crisis, Onimusha, Darkstalkers, Rivals Schools, Dead Rising and more), the announcement of Dragon’s Dogma 2 was incredibly surprising.

That fan sentiment, along with the fact that the Xbox One re-release of Dark Arisen launched for only £20, was also enough to convince me to buy the game again years ago, but for whatever reason, it’s fallen down to the bottom of my pile of shame. Whether it was because of review games or just a stacked release schedule over the past few years, Capcom’s diamond in the rough never had a chance to shine in my eyes.

The hype for Dragon’s Dogma 2 is even more tantalising considering the fact that Capcom has confirmed it’ll be developed using the RE Engine, which has become one of the more versatile game development engines of all time. Capcom has been using it on Resident Evil, Monster Hunter, Street Fighter 6, Devil May Cry 5 and more. Seeing how Capcom uses the engine to create a massive open world RPG is an appealing prospect.

Still, even with the announcement of a sequel, it’s likely that Dragon’s Dogma wouldn’t have ever blipped on my radar again. I would have chalked it up as a game that’s not for me, I guess. It’s since the release of Elden Ring where my curiosity has started getting the better of me. Elden Ring was already a huge revelation for me when it launched earlier this year, so to see people comparing Dragon’s Dogma to Elden Ring, saying that ER is what DD2 could be, makes me want to see what all the fuss is about.

After blasting through Elden Ring’s main campaign and killing most of the main bosses in about 70-odd hours, I’m waiting for Bandai Namco and FromSoftware to announce some DLC before I start a New Game Plus save. There’s no way I’m starting some FromSoft DLC on New Game Plus 2 or higher, I don’t want my self-confidence destroyed like that. If I can get a similar thrill from another game, such as Dragon’s Dogma: Dark Arisen, then I want to chase that high.

With a sequel on the way, its various influences being excellent games in their own right and its legacy leading to a transformative gameplay experience and undeniable Game of the Year for 2022, now feels like an excellent time to dive into Dragon’s Dogma: Dark Arisen. Still, there’s a barrier in place due to my previous experience, as who knows if I’ll just bounce off it again? The only way to find out is to dive right in.