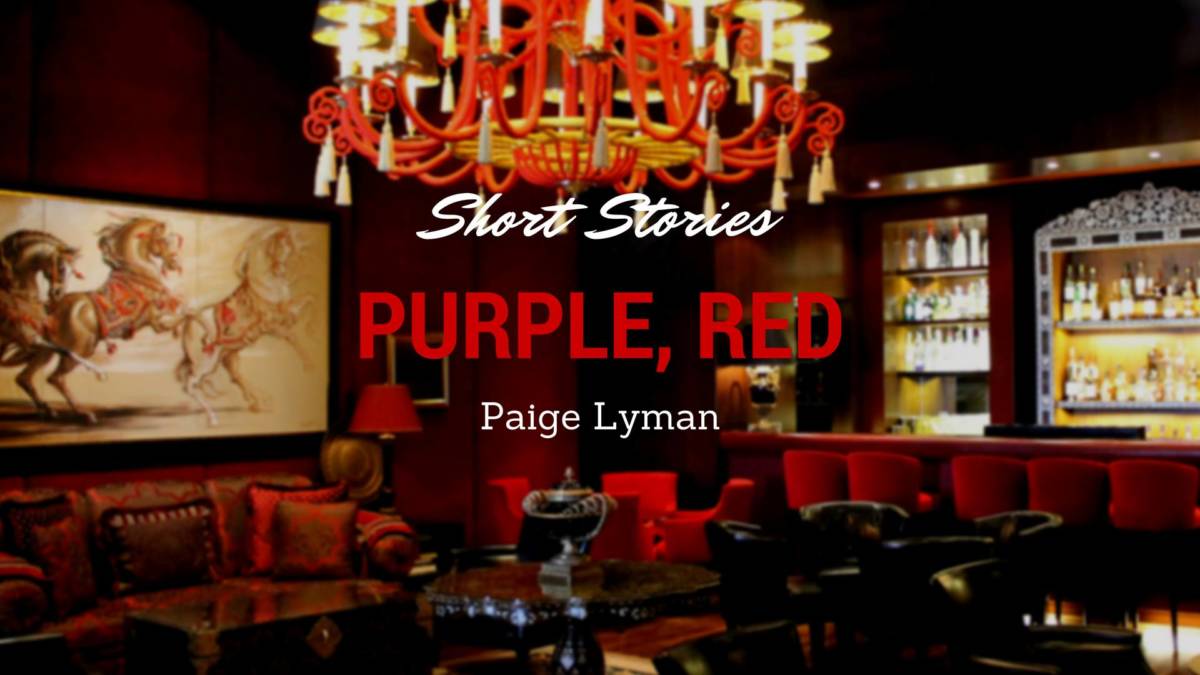 Loud shouts of drunken cheer, slamming of bottles, and a real distinct “40 types of beer have spilled all over this floor and no one bothered to clean it up” smell hung about the crowded bar. A hazy smoke drifted across the busy room from one corner where a hulking man sat leaned back in his chair, feet kicked up and cigarette pressed to his lips. Two glasses were on the table, both half-drunk. Deep scarring marred the right side of his face, standing out against his pale skin in an angry red. Dark brown hair hung over blue eyes as he took a long drag from his cigarette before putting it out in an ashtray on the table.

“Doin’ alright, Layla?” he asked as a petite woman walked up to the table, two new glasses clutched in her hands.

She hummed as she took her seat, setting the glasses down on the table. She pushed bright scarlet glasses back up her nose with one finger.

Layla was small, but she was perfectly fine in bars like this. Especially considering how much of their lives the two spent in bars and similar establishments.

Layla leaned over and pressed a short kiss to Koran’s lips before grabbing her glass.

“She should be here right about now.” she said.

Koran nodded, a soft smile tugging at his lips as he looked at his wife. Dark freckles trailed across her olive skin, dotting her face and nose. She certainly stood out amongst the bounty hunters, weapons dealers, and swords for hires that were scattered throughout the bar, just by how more put together she looked.

He hadn’t seen Lena Mustang in quite some time, but they’d worked plenty of jobs together before and she was as reliable as anything.

Layla took a sip of her drink before letting out a quiet laugh.

“This’ll be a perfect job for you two. I’m just glad she’s been traveling this area of the country lately. I feel better about you going after this general. You seem to be able to keep each other alive.”

“Sure, sure. We keep each other living during the worst of luck.”

There were honestly too many times to count where Koran and Lena had pulled (sometimes jumped) out of trouble’s way, and avoided the too-close embrace of Death.

“So, considering Oris Cline is wanted on multiple counts of murder, Lena being there makes me much happier.”

Layla set her glass down and pushed a stray piece of hair out of her face. A bang sounded from the entrance of the bar as the front door shut, catching her attention.

“And look at who appears when we’re talking about her!”

Layla waved at Lena. A long, black braid hung over the taller woman’s shoulder, partially obscuring the well-worn and dust covered leather jacket she had on. A bag was slung over her back and she carried a sheathed sword in hand. She set both down beside the empty chair at their table before taking a seat herself.

Now that she was at the table, the couple could see a few stitches running across her forehead. Purple and blue bruises peppered her skin, starting to fade already. Lena let out a huff when she caught where their gazes had drifted. “Took a nick on the head. It probably looks worse than it is.”

“Hypocrite,” Lena snorted out, earning a half stifled laugh out of Layla. There was truth to what both said. They were good at what they did, bounty hunting and being a sword-for-hire, but they did get their fair share of injuries.

Layla shook her head at the two before setting her glass down, “How’s Winter feel about that?”

Lena’s cheeks flushed as she ducked her head only slightly.

“She wasn’t too happy, but you know how it goes. She’ll rant about her “stupid, reckless girlfriend getting into trouble” but then get herself going on a ramble about the latest upgrades she’s been working into her prosthetics.”

“That sounds about right.” Layla let out a soft laugh, having heard the tail end of several of Lena’s calls to her girlfriend before. She reached into the messenger bag that was hung over the back of her chair. Pushing past a few paperbacks and a notebook that were in the bag, she found what she was looking for. She pulled it out and set it on the table. It was a brown folder, with several papers tucked inside.

“Stitches aside, I’ve got the bounty info for both of you,” Layla said. She opened the folder, flipping to the first page. A large photo was paper clipped to the page of a man. He wore a dark blue military uniform with a firm scowl and a hard look about him.

The rest of the pages in the folder contained detailed information on the bounty that was out for him, a respectable 40,000, and the crimes he was wanted for.

“He’s the one who tried killing his second in command, yeah?” Lena asked, sliding the folder closer to get a better look. Her eyes scanned through the first few pages. Oris Cline was certainly a character. He was wanted for attempted murder and treason.

“Yes,” Layla said. “From what we were told he’s going to be armed and trying to keep away from public areas. So… the usual I suppose.”

Koran let out a gruff noise of agreement.

“Last place he was spotted was in Thorpes yesterday. Figure you and me can head out after this.”

Lena nodded, flipping through a few more of the pages. Oris had been on the run for several weeks at this point, so it was likely there were going to be some other bounty hunters going after him. But Lena figured with her and Koran teaming up, they could get to him first. And splitting that hefty profit between them would be plenty of reward.

A loud shout sounded from the front of the bar as Lena let the pages fall back into place. “How’d you get so much on him?” Lena asked, the question directed to Layla.

“Being a librarian has gotten me friends in plenty of different places. Archivists especially,” Layla said. Being surrounded by books and other bibliophiles was the perfect place for Layla, and occasionally being able to ask friends to a bit of help certainly didn’t hurt.

“I’ve got a friend who works in public records and she was able to compile all the files together.”

Lena pushed the folder back across the table to her.

“So we’ve got a formerly high ranking military officer on the run, wanted for multiple crimes. Cool.” she said.

It wasn’t the first time she or Koran had been after a higher value bounty, so she wasn’t too worried over that. Though to go into a job like this with no sense of self-preservation or care would be deadly.

“That’s exactly what you two have,” Layla said, handing the folder to Koran. He took it without saying a word and slid it into an inner pocket of his long coat.

“Figure we’ll head out to Stragos after this,” Koran said. “Last place he was sighted. As good a place as any to start.”

Lena took one of the glasses from across the table, pulling a long sip from it, “I’m ready whenever. LYL’s staying?”

“Oh yes. Not much of a fighter myself. You know that Lena,” Layla said. A good few weeks where she’d be buried in work was never something she complained about, actually quite enjoying it. Contrary to many, she loved digging herself into her work and really taking in all of the books.

Lena’s face crinkled in amusement, causing the bruising on her face to contract into different shades under the light. “Books versus a murderous official? Hard choice.”

The other woman rolled her eyes good-naturedly, reaching a hand out to take Koran’s tightly. “You two be sure to bring your smartass humor back in one piece, ok?”

Koran let out a deep chuckle as he brought their joined hands upwards off the table, pressing a kiss to the back of Layla’s hand. “Of course, love. Can’t leave you wanting for things to laugh at.”

The rowdiness and noise of the bar was muffled, only seeping out when the occasional patron walked in or out. The trio were gathered just alongside Koran’s truck as Lena heaved her bag into the backseat. She set her sword alongside the console in the front seat. She didn’t bother to close the door, since she’d been getting in in just a few minutes. Stretching her arms behind her for a moment, she stepped around the side of the door.

Koran and Layla had their arms wrapped snugly around each other as they kissed goodbye. Layla had to stretch up just a little to reach Koran’s lips, the height difference even more noticeable between the two.

Lena couldn’t help herself and let out a loud whistle. “You guys are disgustingly cute.”

The couple didn’t immediately break apart, but when they did Layla’s face was much darker shade. “We could say the same about you and Winter,” she said, before pressing her head against Koran for a tight, long hug.

Koran pressed one last kiss to Layla’s lips before stepping away and moving to the driver’s side. “I’ll keep in touch,” he said, opening the door. “Let you know how everything’s going.”

Layla nodded approvingly at her husband, sliding one hand into her coat pocket.

“You better Kor. Or we’ll have to have words when you get home.” She slid her free arm around Lena for a quick hug. “Have a good trip you two. Don’t die, huh?

Both Lena and Koran slid into the truck, Lena rolling down the window as the truck started up. “Of course not. I’d have to come back just to see your beautiful face, love.” Koran called from inside.

“Disgustingly cute!” Lena called as Koran pulled away from the curb, leaving a laughing Layla to walk home.