Sexism In WWE Is Still a Real Problem 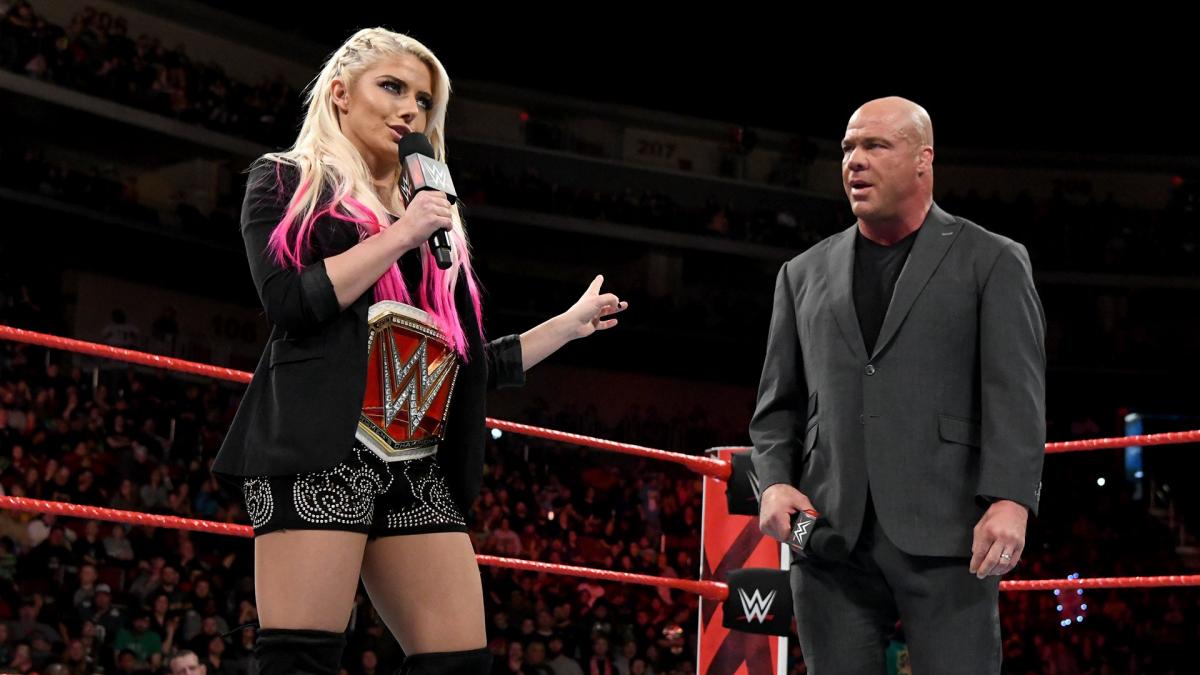 Following Raw this week, WWE 24: Empowered aired on the WWE Network. The latest installment in the acclaimed documentary series was centered on the women’s Royal Rumble match and its history making ramifications. It served as a stark reminder of how far WWE have come in showcasing their women’s division. No longer is the role of the women in WWE that of eye candy, but as professional wrestlers who are to be taken seriously.

However, we’re still a long way off where we need to be. The recent body shaming storyline between Nia Jax, Alexa Bliss and Mickie James demonstrates a clear gap in WWE’s understanding of booking women. Stories and characters are harshly limited in comparison to the men, and that needs to change.

We talked with Christy, who runs the Twitter account Wrestling Sexism (@wrestlingsexism), which aims to educate, inform and address sexism throughout both the wrestling industry and fan community. When being asked if the roles women have to play in WWE were limited, Christy’s response detailed the exact nature of the problem.

“I believe so, yes. Though it’s better than it’s been in the past, the women generally don’t have as much variation as the men do. Most can still be grouped into ‘mean girl’, ‘the sexy one’, ‘the REAL wrestler/athlete’, and ‘girl next door’. As to why that is? I believe the lack of female input matters. The lack of female writers. The fact that a couple of men have the final say.

“The lack of diversity when it comes to the women WWE employs (most have the same or very similar body types, whereas there’s much more variety with the men). It’s also the lack of time and opportunity. You can’t create intricate characters when you aren’t given the time, so it’s easier to default to age-old tropes that are easily recognised and that you’ve made your audience accustomed to through decades of material.”

The lack of diversity is the most glaring issue with WWE’s behind the scenes staff. There isn’t a single female writer on WWE’s creative team. Not a single one. Just think about that for a second, WWE have a fully formed women’s roster with established talent, and every one of those characters are written by men.

You’d think with WWE placing more of an emphasis on female empowerment, this would be reflected behind the camera as well as in front of it. Apparently, that’s not the case. We then discussed the presence of Vince McMahon, someone who has demonstrated frequent misogynistic characteristics over the years, whether that be in character or in the overall presentation of female talent. Can true progress ever be made with someone like Vince in charge? Christy is not optimistic about this.

“No. And it’s not just Vince. It’s the people he’s gathered around him. Who he’s moulded into thinking similarly. The ones who’ve been able to stick around because they provide what Vince wants in one way or another. Even Triple H and Stephanie have been part of this kind of environment for so long that they’ve no doubt picked up toxicity. So even once Vince is gone, his mentality needs to be gone too before things can really change.”

There is no better example of this than every fan’s favourite punching bag, Kevin Dunn. While we like to make fun of him, Kevin is a powerful figure in WWE’s direction. He is effectively Vince’s right-hand man, and is the highest-paid executive in the company, with a salary even larger than McMahon himself.

One notable exchange between Vince and Kevin should tell you everything you need to know about the man. When discussing how Kelly Kelly could connect more with fans, Kevin Dunn’s contribution to the conversation was, “She needs to find some tits!” Those are the words of a high ranking corporate executive in WWE, a sophomoric, juvenile, chauvinistic comment that proves Vince surrounds himself with toxicity.

Even as recently as this month, WWE added to their history of poor taste when they announced that they would be naming a women’s battle royal at WrestleMania after The Fabulous Moolah, a less than savoury figure in the canon of women’s wrestling. Myself and Christy agreed that this sort of empty gesture proves that WWE don’t quite know what they’re doing.

“WWE naming the women’s battle royal after Moolah shows they’re not really in it for empowerment and, like you said, they don’t understand what it means. I’ve always said that it’s first and foremost a marketing strategy. A way to make money. It was also the threat of one of their investors that made them change the name. Short term that isn’t going to change. Certainly not the skin deep problem. You’ll see a shiny outer layer, promising things and looking nice, but that only exists because of pressure from outside and not necessarily because they WANT to do better.”

Doing things for the sake of doing them without comprehending the magnitude of the gesture is a classic WWE move. If thought isn’t put behind it, then fans will easily be able to pick it apart. The only real big thing WWE have left is an all-women’s WrestleMania main event, something that I asked Christy to speculate on the closeness of, given WWE’s habit of botching hot angles.

“I honestly don’t know. Yes, WWE is bad at things like this, but they’re also huge on historical firsts and mainstream attention. Making the women main event WrestleMania would be just that. I don’t expect it very soon, but we’ll see.”

Speaking of historical firsts, nobody has embodied self-insertion into major story developments more so in recent times than Stephanie McMahon. McMahons enjoy putting themselves in the spotlight, and we see more and more of Vince in his daughter’s on-screen actions every time she appears on Raw. There is such a similarity to her father’s way of running things that it could prove problematic in the long run.

“I think Stephanie McMahon is the product of decades of being raised by her father to be like him WHILE in a sexist environment. I think she has a lot of internalised misogyny and has learned to survive and be successful in a toxic, cutthroat environment.

“She’s also not the woman for this, because it comes across as disingenuous, but they don’t have anyone else. They’ve not built up any women who could be in her position. Whether or not she’s sincere… I do think she wants the women to do well. I do think she’s proud when they prosper. However, I also think she cares more about her company’s success. She’s been taught that from day one.”

Vince won’t be in charge forever, at which point, it will fall onto the shoulders of Stephanie McMahon and Triple H to guide the ship. They’ll need to take major steps in achieving true equality, steps that Christy could easily identify and explain.

“Hire more women. Hire more female writers. Give more women the opportunity to make decisions and don’t let a straight, white man dictate and decide everything. Give women more time and more varied opportunities. Invest in them like you do the men.”

It seems so straightforward because, in truth, it is. Casting a wider net so that all of the various groups in your company can be represented fairly is something WWE need to address. When you have a talent like Sonya Deville, the first openly gay women’s wrestler in company history, is she going to be treated with the same care and attention as a male talent when a straight, white man is in charge of her development? The answer is no. We’re defined by our experiences, WWE’s writing staff are nowhere near diverse enough to be able to empathise with the life experiences of someone like Sonya Deville, meaning her presentation will suffer.

WWE aren’t all bad in regards to their women’s division, as Christy could articulately express her favourite things about the product and its use of women.

“I love when storylines and friendships happen organically. When it feels real. When they’re about friendship and competition instead of petty jealousy. And I want relationships between the women to mean something and to remain consistent.”

Of course, this does come with more than a few caveats, as WWE’s programming is anything but perfect, as Christy continued.

“I don’t like the fact that unless you’re fighting over the belt, your importance seems to dwindle. If you’re lucky you’ll find yourself in a storyline revolving around a man or your looks. If you’re not lucky, you’ll have next to nothing to do. And, gosh, I hate those storylines where WWE pictures asshole misogynists as good guys (Hello, Enzo/Lana storyline!).”

Christy’s example of the storyline between Enzo Amore and Lana brought back some uncomfortable memories that reminded me as to why more needs to be done. Enzo approached Lana while he was butt-naked, and it was depicted as innocent charm. Because to Vince McMahon, nothing is more romantic than indecent exposure and sexual harassment. Considering what would then come out about Enzo, it only becomes more upsetting to think about.

Sexism in the WWE hasn’t died, no matter how much they like to pretend it has. Sweeping a problem to the side and replacing it with positive steps still doesn’t eliminate the existence of said problem. In many cases, it seems to be one step forward and two steps back.

A further thank you to Christy for her invaluable insight into a topic that is more relevant now than it ever has been. If you’d like to find out more about her efforts to call out sexist activity in wrestling, then do follow @wrestlingsexism, where you’ll find a wealth of information.