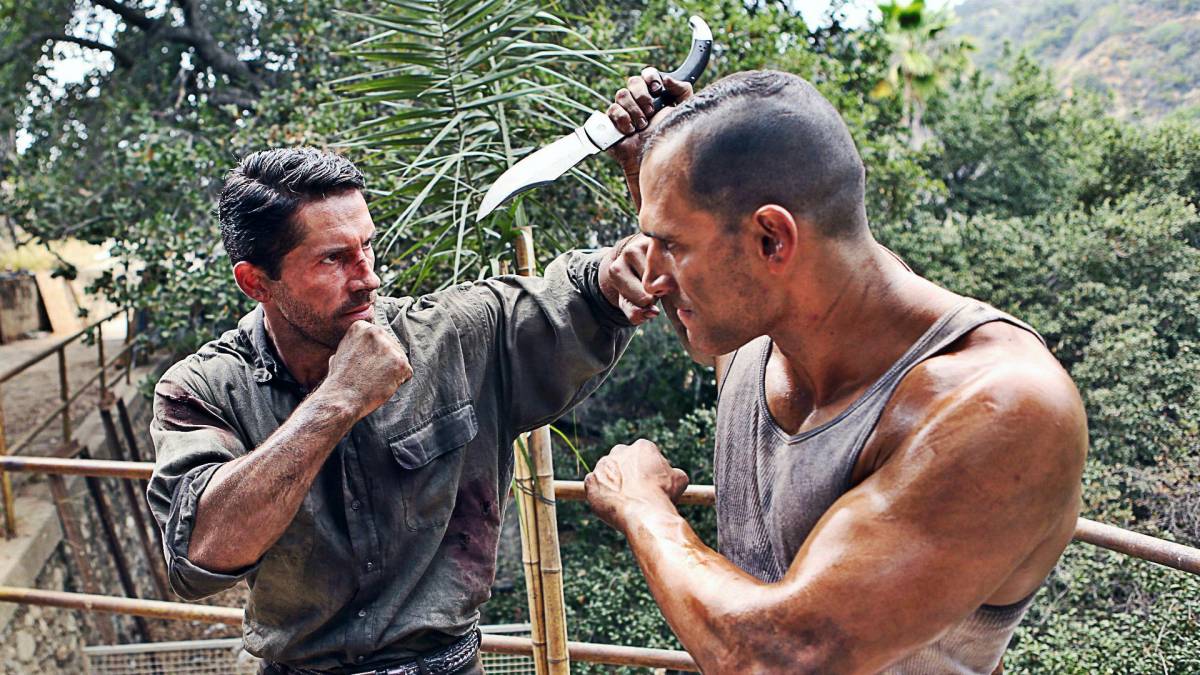 Scott Adkins has already punched and not to mention kicked his way into the pantheon of B-action movie stars, joining the (veteran) likes of Chuck Norris, Steven Seagal, Dolph Lundgren, Mark Dacascos and Jean-Claude Van Damme (the list could go on). ‘The king of the low-budget sequel’, as he jokingly declares himself, is probably best known for his villainous portrayal of a Russian MMA underground fighter, Yuri Boyka, from the Undisputed series, but you might have spotted him air-stewarding in turquoise uniform, in the British TV show Mile High.

Lately, his filmography has grown at breakneck pace (no pun intended) – last year, he appeared in eight features and his 2017 has been quite busy as well, Savage Dog being the first out of three collaborative projects with the stunt performer and coordinator turned director Jesse V. Johnson. Although it just barely qualifies as something to write home about, their violent ‘period piece’ provides a quick fix for action junkies.

Set in 1959, it sees Adkins as a former boxer and IRA operative, Martin Tillman, imprisoned in a remote part of Indochina which ‘has become a melting pot of postwar villainy’, as noted in the opening epigraph, and forced to participate in illegal fights. The dirty business is run by an ex-Nazi, Steiner (Vladimir Kulich, subtly exuding menace), whose henchmen include a corrupted police official, Boon, and a Blue Division soldier, Rastignac aka ‘The Executioner’, played respectively by the martial artists with thespian careers, Cung Le and Marko Zaror.

After the arrival of a snooping British agent, Harrison (Matthew Marsden), Martin gets on parole of sorts and begins to work as a bouncer in a tiki bar run by Valentine (Keith David of The Thing and They Live fame, lending his gravelly voice as beyond-the-grave narrator). There, he falls for a local girl, Isabelle (the underused Juju Chan), but their happiness is over as soon as you say uppercut – after all, they live in turbulent times, amongst the dangerous men ‘who reached the end of the line’. In the aftermath of a shootout, they are left presumably dead in the mud from which Martin rises with a warrior cry and goes into full-on Rambo retaliation mode.

During the film’s first half, Adkins’s old-school macho protagonist uses only his bare fists to beat the crap (pardon my French) out of his opponents (mostly simple and unnamed thugs), showing off his hairy pecs alongside his best Irish accent. Later on, however, he resorts to weaponry of all kinds, from a head-chopping machete to head-exploding grenades, his savagery culminating in the final battle that gives a whole new and very literal meaning to one Serbian saying involving liver. (To put it differently, think Mortal Kombat fatalities.) As his animalistic energy intensifies, the body count increases and the legend with ‘a God-awful talent for carnage and death’ is born.

So far, you have most certainly guessed that Johnson relies heavily upon the 80s and 90s movies which brought the above-mentioned cinema-brawlers into prominence, delivering solid set pieces in spite of limited resources and adding some corny drama and exotic, post-war Eastern flavor to the familiar, somewhat noirish proceedings. His loving homage is miles far from being the next Raid or even The Wrath of Vajra, yet it appears as a slightly above average no-brainer revenge flick with OK performances from the entire cast, nice cinematography (kudos to Gabriel Gely) and the fitting, unobtrusive score by Sean Murray (whose resume lists 10 episodes of Buffy The Vampire Slayer and the popular first-person shooter Call of Duty, inter alia).

If you are looking to sink your teeth into a gritty beat ‘em and shoot ‘em up (but without a gamepad), maybe you should dedicate an hour and a half to this dog.