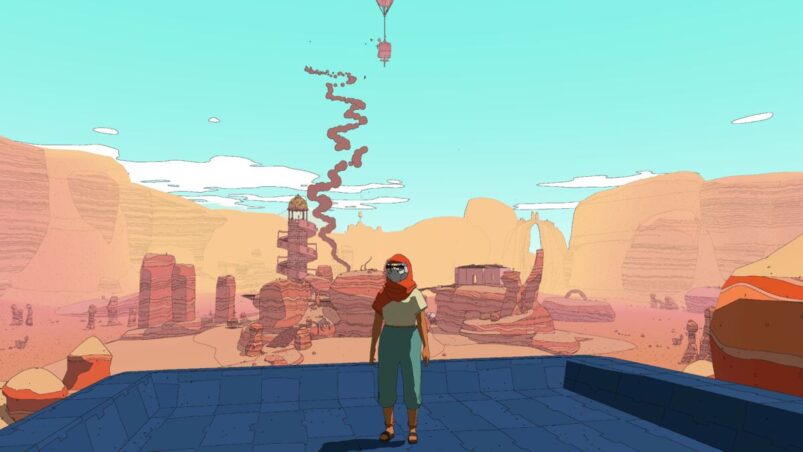 While the Summer Game Fest Kick-Off event was just the 90 minute showcase for some people (and for others, it was literally just Elden Ring), one of the biggest parts of the occasion came afterwards: the Xbox demo event. Started in 2020, the demo event this year sees 40 indie games given limited time demos, with one of the biggest highlights of 2021 being Sable, the free roaming adventure game from Raw Fury and Shedworks, and if the demo is anything to go by, Sable could be a real winner.

The story sees the titular character, Sable, embarking on a special pilgrimage to discover more about her world and its inhabitants. The demo ended with Sable about to leave the village, covering the game’s prologue where she prepares to make her journey, gaining magical power to help traverse the world and putting together her own hoverbike so she doesn’t have to walk everywhere. Seriously, it’s all desert. Who wants to get sand between their feet 24/7?

From a gameplay perspective, Sable feels somewhat like Breath of the Wild but without the combat, which actually sounds like a preferable version of that kind of gameplay. I mean, you definitely don’t have to worry about any form of weapon degradation in Sable. Divisive hot take aside, the traversal in Sable was a lot of fun. If you see a vertical surface, you can climb it, with a stamina bar appearing on the side just like BOTW.

You also unlock a glide ability that allows you to cover great distances when jumping from a large height, but crucially, there doesn’t appear to be any fall damage. As far as the demo is concerned at least, Sable offers some consequence free exploration, allowing you to truly immerse yourself in this beautiful world. And it is beautiful. The game’s art style is absolutely stunning. Sable is honestly worth playing just to see how it looks.

The demo section also offered some interesting characters from Sable’s clan, each of whom felt well written. The text boxes and written internal narration/dialogue that describes how each character reacts is much better than something like Biomutant’s incessant narrator. Sure, there’s very little in the way of animation when talking to people, but getting to read Sable’s inner thoughts during conversation is pretty engaging.

The conversations also hint at the game’s emotional core, with the village elders excited for you to go on your journey while there’s a young child who actively hinders your quest because they’re scared you won’t return, like another before you. There’s also discussions about how Sable’s clan is seen as rather insular and unwelcoming of outsiders, which Sable believes is the opposite of the truth. There’s depth here in the narrative and setting that should make discovering the game’s world more worthwhile.

While the demo section felt a bit like hand holding, giving players easily signposted objectives to complete, the full game promises to up the exploration and player agency to a huge degree. You’re given a compass and a navigator, with which you can set destinations for yourself based on the world you can see, similar to BOTW’s telescope. Hopefully, you’ll be able to carve your own path at your own pace, occasionally accepting hints from well-meaning strangers along the way.

The only real issue that occurred during the demo was some weird input lag on Sable’s movements and jumping, which was delayed by around half a second. While not unbearable, it did make playing the game a bit more of a chore than it should have been. However, the demo was updated, and the issues seem to be fixed.

Sable looks like it could become a real sleeper hit when it launches on PC and Xbox later this year. The fact that it’s also coming to Xbox Game Pass should hopefully ensure that this wholesome and beautiful looking game gets the audience and attention it truly deserves.

Sable releases on September 23rd for PC, Xbox One and Xbox Series X | S. The game will launch as part of Xbox Game Pass.