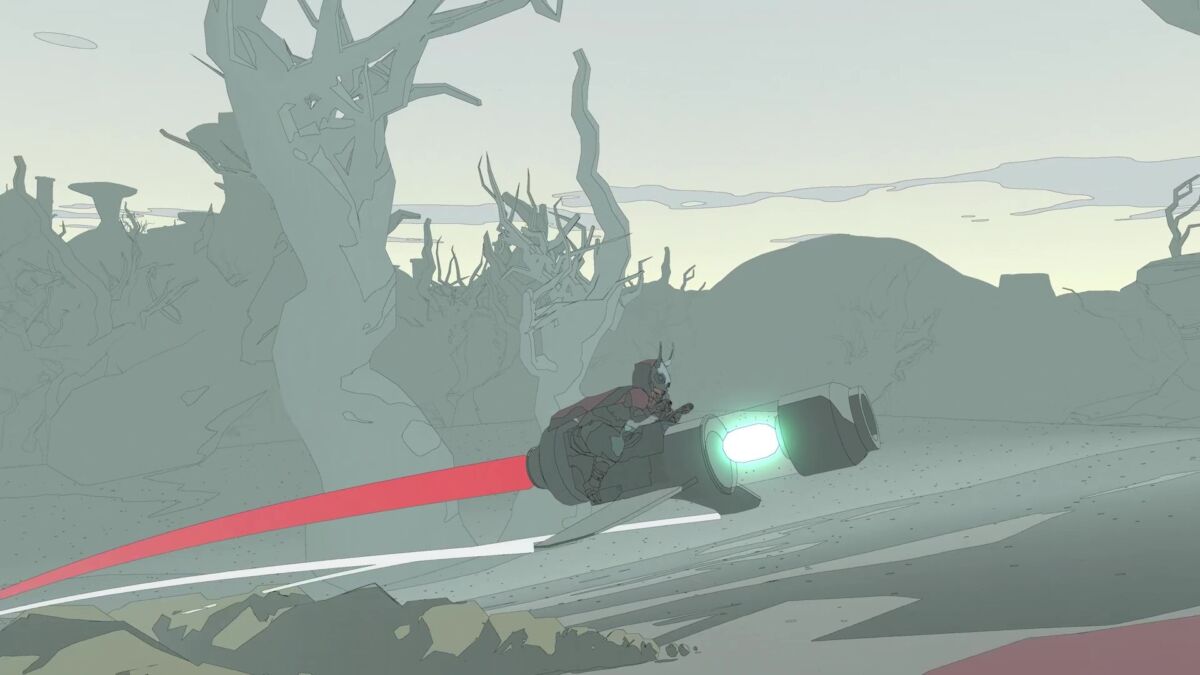 Shedworks’ Sable: 7 Things You Should Know

E3 has always been the time to see the newest updates on some of the most anticipated games, and this year was no exception with Shedworks’s debut game, Sable. Originally announced at E3 2018, Sable did see a bit of a delay from its planned 2020 release date, presumably due in part to the pandemic.

However, that time was not for naught as Sable has continued to gather a following, garnering attention for its unique visual style and simple premise. The game follows Sable, a young girl about to leave her tribe on a rite of passage to explore the vast deserts and ruins that surround her home.

Since 2018, there have been tiny developer updates giving a glimpse into Sable’s world, but it wasn’t until this year where we’ve finally been given a more thorough rundown of the game’s mechanics and star character. We’ve picked the most important things about Sable you’ll need to know before you jump on your glider and head out into the desert.

Sable has received a lot of press since it was announced, but it turns out that the game is being developed by a relatively new studio managed by only two friends: Daniel Fineberg and Gregorios Kythreotis. Though the studio was founded in 2014, Sable will be their first game.

They have worked on other projects with other groups to lend their talents to videos, apps, and music. As recently as 2018, Shedworks worked in collaboration with Sam Jacobs to make the Disappear Here exhibition. However, Sable is their first full-fledged attempt at developing a game on their own. Sable is shaping up to be one of the standout new indie games of the year, and the fact that it’s being created by such a green pair of gaming developers is impressive.

2. Customize Your Clothes and Glider

The clothes make the nomad. What is a rite of passage without changing up your identity to match? Any good journey needs to allow the player to match the feelings they begin to develop through their adventure, and Sable allows that in two ways.

Sable starts with just three articles of clothing: pants, a coat, and a mask. However, there will be opportunities to mix and match these three clothing slots with others found throughout the wasteland. There isn’t any word whether the outfits will have mechanics too or whether they remain strictly cosmetic. Only time will tell.

The second main character of the game, Sable’s bike, can also be customized. The pieces to the bike can be found throughout the world, like in the remnants of fallen spaceships that are lying in the middle of the desert. The changes that Sable makes to her bike can even alter the performance of your hoverbike’s handling and speed.

Shedworks has been open about their influences artistically when developing the game. They cite the French artist Moebius, the Japanese animation company Studio Ghibli, and even the cartoon Tintin as key inspirations for their visual style.

The most prominent and easily recognizable influence of Sable is the work of Moebius. In fact, beyond the soft colors and ancient cosmic tone that both Sable and Moebius share, there are even shots that appear to be direct homages to Moebius’ work.

Take, for instance, the opening to the game where Sable is walking into the ruins to sit before a giant face, which is reminiscent of other scenes in Moebius’s catalog. From the design of ruins to mysterious airships floating in the sky, there seems to be a heavy influence from the French artist. So be on the lookout for what might be other references to Moebius’s work or even another one of Shedworks’ inspirations in Sable.

This wide-open world may seem like it hides unknown dangers to Sable, but Shedworks wanted to emphasize exploration and becoming lost in the world they created. The player is free to explore without the fear that something might hinder their progress or jump out from the shadows.

There is no restriction on the player in that regard. Without fear, the player can focus on how they are experiencing their journey rather than planning for a fight or being too afraid to venture further into the wilderness. Sable appears to want its players to lose themselves in the journey as they clamber over mountains and crawl through ruins in search of artifacts, upgrades, and themselves.

Besides the bike parts, artifacts, and outfits that Sable can collect, some eggs can be found throughout the world on top of clifftops and in rock beds. Though their reward is unknown, their challenge lies in how hidden and out of place they seem to be.

Even if the world may appear vast, it isn’t endless. There was speculation early on that Sable might have an unlimited world to explore, but the game’s world does have a limit as all the environments have been hand-made and curated for the player to enjoy. Everything is purposeful.

5. Sable’s Not Just a Biker

Though the hoverbike is really cool, and the scenic shots seem like they are straight out of the deserts of Tatooine, the game features other ways to traverse the environment. The first one is a climbing mechanic that is like a more simplified version of The Legend of Zelda: Breath of the Wild’s climbing system.

Sable can climb any surface in the game but is restricted to a small stamina bar, and so far, it doesn’t seem like that bar can be upgraded — the player will need to be conscious of how they are using their stamina. As of the demo, there doesn’t appear to be an ability to jump up higher with a low bar to reach just a little further like in Zelda, but maybe an upgrade can change that.

As well as climbing, Sable unlocks the ability to glide using ancient secrets that appear to be passed down through her tribe. Sable uses a rock that has been imbued with some cosmic rays from a nearby temple to create a bubble around her, and this bubble makes her fall much slower through the air with a lot more control. The ability to hover will allow the player to reach across chasms they once thought impossible.

However, just because there aren’t any enemies out in the desert, that doesn’t mean there aren’t challenges that the player will be tasked with completing. There are puzzles to complete to access new areas and learn more about the world. Sable will need to use her know-how to interact with the environment, collect key parts, and maneuver ruins and mountains to reach her destinations.

The people of Sable’s world use the technology scavenged from the fallen spacecrafts, but they’re still partially a mystery in their construction. From the looks of the demo, some of these puzzles will revolve around the secrets of these crafts just as much as the ancient secrets of the temple ruins sprinkled throughout the game.

There are even a few quests that Sable will find herself doing, including hunting down beetles to find a part for her hoverbike, where the player gets their first interaction with one of the young nomadic children from Sable’s tribe. The quest, though simple, also acts as a way to show that things might not be as straightforward as they initially seem.

The story of Sable is focused on the young girl’s growth as she leaves her home. Her story relies on isolation, and how she reacts and learns about the world around her will be the key focus. There will be plenty of quiet moments where it will be just Sable gliding through the desert alone or slowly climbing up a cliff to reach a new artifact.

However, these moments will be offset by the characters that Sable meets along her journey. Just as Sable runs into characters to give her direction with quests, she will also run into opportunities to find other individuals who will teach her more about the world and herself.

In the demo, we get a taste of this with the dialogue options and Sable’s inner monologue as she ponders her conversation with her friends. There are options available that appear to slightly alter the course of the conversation, but it isn’t clear how drastically these options can affect the flow of the game.

Sable’s tale is poised to be one of exploration, introspection, and reflection, and we can’t wait to see just how she develops as a character during her time in the sandy wastes.

Sable launches September 23, 2021, for PC and Xbox Series X | S and will be available on Xbox Game Pass.

READ NEXT: Guardians Of The Galaxy: 5 Things You Should Know