While Ruby tries to figure out a way for the gang to keep going with her quest, she finds solace in meditating on her powers with Maria. 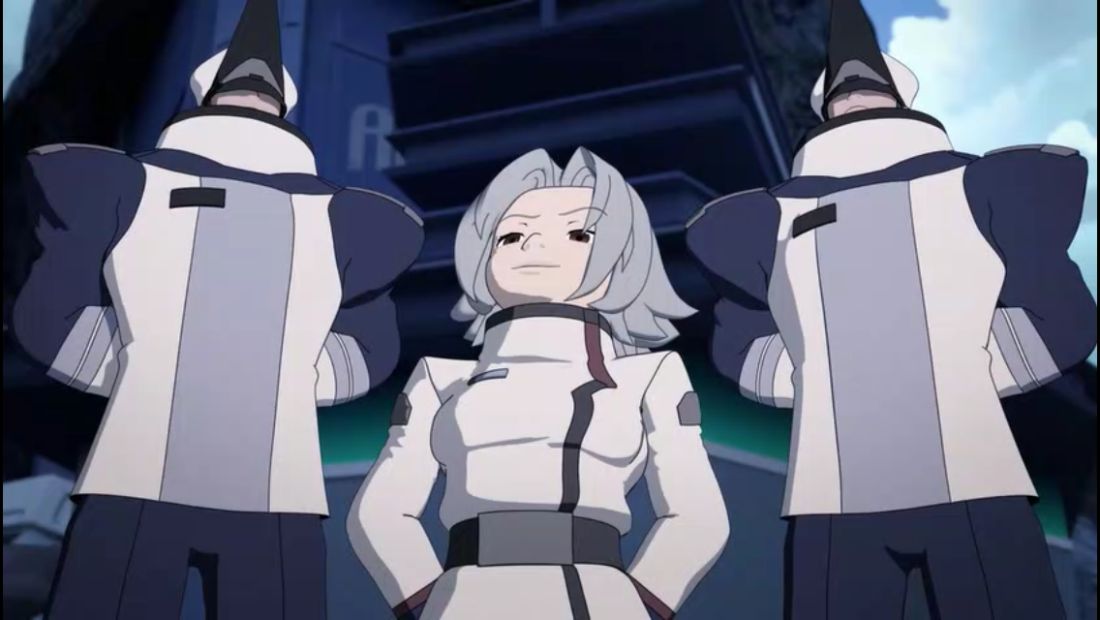 A lot of the episodes in Volume six of RWBY have had the common theme of remembering the past as a way to answer for the present’s conflicts. The best example of this is the episode ‘The Lost Fable’, in which the audience and RWBY finally discover the reason for the conflict throughout the show. ‘Dead End’ follows a similar example – while Ruby tries to figure out a way for the gang to keep going with her quest, she finds solace in meditating on her powers with Maria.

One of the key themes of RWBY is mirroring well known stories and fairy tales. With that being said, the episode opens up where the previous left off, with the gang trying to convince the equivalent of Tweedledum and Tweedledee to open the Atlas border for them with little success. Only when Qrow tries to convince the pair that they are trying to get Weiss Schnee safely home do they reconsider their stance, going to retrieve the commanding officer of the base. Maria mentions that she knows the officer, but far from a friendly basis. It is then that we are introduced to Caroline Cordovin, who feels very reminiscent of Lord Farquad from Shrek: proud, proper and vertically challenged. Again, the gang try to convince the officer with little success, only offering Weiss passage if she truly wants to go home. Throughout this whole exchange, we learn a lot about Cordovin’s character: while blindly devoted to the kingdom of Atlas and her mission to protect, she is extremely racist, seeing the people of Argus below her and making a comment about Blake’s Faunus features. Though a very unpleasant character, she is still an interesting enough obstacle for the team to try and overcome. Additionally, a lot of the writing in this scene is played for comedy very well.

As the team try to confer as to what their next move will be, Qrow goes into the city to drink, making the remainder of team JNPR suggest that Ozpin can offer them some help. The episode transitions back to the house they are staying at, with RWBY having caught up the others on what has happened to Ozpin off screen. This leaves Jaune, Ren, and Nora just as angry and confused as RWBY were when they found out, with Jaune going as far as threatening Oscar for being a part of Ozpin by pinning him against a wall. This sequence is questionable and uncomfortable: though Jaune does seem remorseful of his actions and his anger does seem justified, it just feels wrong, especially when you take into consideration that Oscar is fourteen and Jaune is about nineteen. While Nora and Ren are equally upset, they still hold back their tempers and it just makes Jaune come of as immature at best and a potential threat at worst.

The group split up temporarily to take a breather from each other, with Ruby going into the garden, trying to call Qrow with little success. As she throws her scroll away in anger, she finds Maria, who is sat alone to ‘get away from all the shouting’. Ruby sadly recounts her thoughts to Maria, concluding that she feels like she’s ‘letting everyone down’, with Maria gently shutting her down and moving the topic to her silver eyes. This piques Ruby’s interest, and the two discuss what Ruby knows. When it turns out to be very little, Maria doesn’t blame her, going on to explain that it was her father who taught her, and even he had limited knowledge. Though he was something of an unofficial huntsman, he was the one who taught Maria. She goes further into saying that the lack of knowledge about silver eyed warriors made him cautious, for ‘how could such powerful bloodlines be so rare, unless something was actively seeking to destroy them.’

This additional detail hints at something else to Ruby as well: since Maria described it as ‘our power’ in reference to her and her father, the power of the silver eyes is hereditary, meaning that Ruby’s deceased mother was more than likely one as well. Though her silver eyes are a great power, Maria says she still ‘owes her life to her training and her semblance’, which is revealed to be called reflexes, and makes Maria more in tune with her surroundings. Though interesting, it’s a little disappointing: a few fan theories have popped that since her last name is Calavera, which is a representation of a human skull most commonly used in the festival of the Day of the Dead, that perhaps her semblance may be something to do with contacting the dead, more specifically previous silver eyed warriors, which could have been an interesting plot device to play around with.

The lesson continues, with Maria asking Ruby to think back to the moments she used her powers and what those moments had in common. At first, Ruby suggests being stressed and scared, with Maria saying that although it is an emotional response, it’s more focused than that, with Ruby arriving at the correct conclusion that she wanted to protect her friends. Maria goes on to explain how while the Grimm were a creation of the god of darkness, Ruby’s power comes from the god of light. When Ruby thinks back to Jinn’s vision, she notices the power came from his eyes. Though Maria explains that Ruby can only tap into her power in the presence of Grimm, she can focus on a state of mind for when the time comes, and that Ruby should think of her power as a way of protecting people instead of destroying evil. Ruby is briefly confused, pointing out that it affected Cinder. Though this leaves Maria and Ruby questioning, the audience already know how Cinder was infected by a Grimm parasite. An additional thing to observe is that a softer version of Ruby’s theme ‘Red like Roses’ plays in the background throughout this sequence, which is a nice touch. The episode finishes with Blake telling the gang that Oscar is missing.

Though ‘Dead End’ has about the same running time as the other episodes, it seems shorter for the lack of events taking place. And though a good portion of it does feel like filler, it also adds something to the plot: the episode builds more upon the teacher-student relationship that Maria and Ruby share, while also setting up a new conflict for the team to resolve in the form of Cordovin. Additionally, though this episode is dialogue heavy, it’s less of an issue than in previous episodes, coming off as more natural, though there is the point of show, don’t tell. Perhaps there could’ve been a flashback sequence of Maria’s father trying to learn about his daughter’s eyes, instead of simply recalling it to Ruby.

Verdict
Half feeling like filler and half filling in more details in the story, the episode ‘Dead End’ is an effective interlude in the volume’s story, building up relationships and developing characters.
7.5
Cultured Vultures is a pop culture website established in 2013 covering all things gaming, movies, and more. We eat your words.
All The News On The Biggest Games