How many Ice Queendom-related puns can I make? Anyway, things are turning out bad for RWBY. 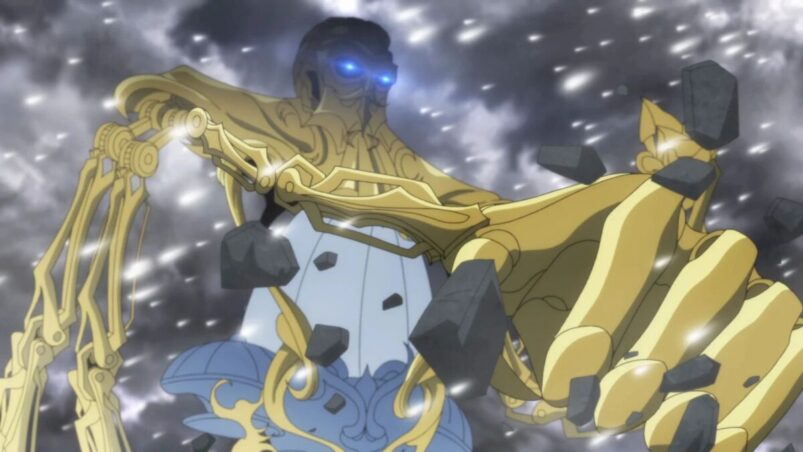 ‘Where You Belong’ opens up directly where the previous episode ended, with Nightmare Weiss and the Nicholas statue cleaning up the city – any of the Little Weiss’s that grew too big are reverted back to their normal size and returned to their prison, along with dream Ren and Nora. Aiding her in this endeavour is a Nightmare Geist, transformed from a statue of her father into the form of the Geist she battled in the real world. Also, I love the joke of Jaune standing up to Weiss only for him to be thrown into prison as well – still not a fan of him trying to get some of the spotlight, but still gave me a chuckle.

Meanwhile, team RWBY faces off against the Nicholas statue to regain entrance to the palace, and I do like how some of the themes that were brought up at the start of the show are starting to come full circle, with Ruby stepping up to her role as leader, and Yang allowing her to do so instead of choosing to go in her stead.

As the Nightmare Grimm tightens its grip on the Ice Queendom, Jaune and Pyrrha manage to escape their prison with a group of the little Weisses, seeking sanctuary in the Schnee Dust Company train, which the Nightmare avoids because of Jaune’s connection to the Grimm. I’ve made my disdain for Jaune acting like the main character clear in previous reviews, so let’s move on from that.

In the palace, team RWBY try to destroy the Nightmare Grimm, only to have their efforts thwarted by Nightmare Weiss. Separated from Yang and Blake, a wounded Ruby reunites with Jaune and seeks sanctuary at the train, with both of them reflecting on Weiss’s condition and Ruby slipping into self-deprecation for her failures as a leader before she passes out due to her wound and the Nightmare’s influence growing stronger on her. Now while the original RWBY show has a thing for concluding episodes on a cliffhanger, the way ‘Where You Belong’ finishes is so good.

Yang and Blake are left to explore a new banishment realm in the Ice Queendom; Nightmare Weiss is on the edge of accepting “true sleep”, while Ruby finds herself in her own nightmare, with people at first applauding and making her believe she rescued Weiss before things slip into darkness. It’s a scene that’s almost horror movie worthy.

I’ve mentioned in previous reviews that Ice Queendom does take inspiration from other forms of media, some quite blatant. The ending of ‘Where You Belong’ is no exception: it feels like a combination of the ending of Neon Genesis Evangelion with the applause, Inception with the nightmare within a nightmare, and The Empire Strikes Back with this portion of the story concluding with our heroes at their lowest point yet, but it still leaves the viewer with equal levels of dread and anticipation.

Despite being a collaborative project with RoosterTeeth, it is still cool to see how studio SHAFT do seem to be fans of the original show. When Weiss is left contemplating her “true sleep”, she does so while staring at an apple – referring to how her character takes inspiration from the fairy tale of Snow White.

Even though Ice Queendom is a spinoff that takes place within the canon of the original show, and therefore anyone familiar with it knows that team RWBY is going to turn out alright – still, how will they turn out alright? There are a couple of moments that are a bit cheesy – like Jaune’s monologue about how Weiss had to lock her childlike emotions away to function as an adult – but ‘Where You Belong’ is the darkest, and possibly the best moment of Ice Queendom.