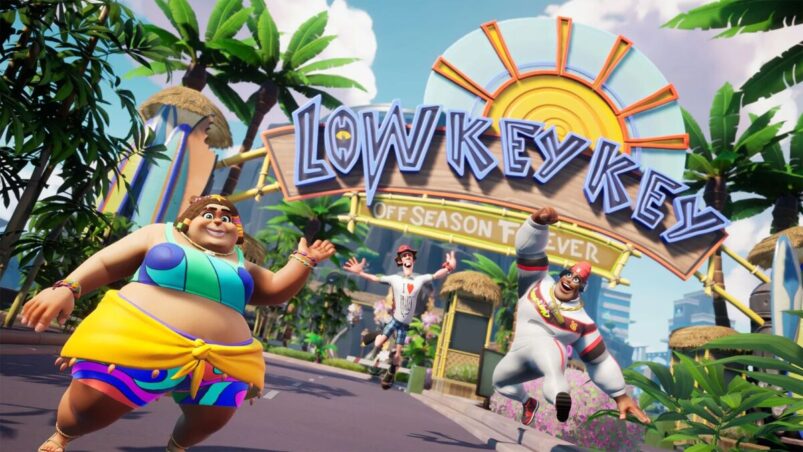 If you haven’t been playing Rumbleverse yet, you’re missing out on a genuinely inventive and new battle royale experience where players smack the crap out of each other instead of chugging some Mountain Dew and performing some weird, twitchy movement tech. The kids these days that play shooters are actually cracked, I can’t compete any more. At least Rumbleverse lets me suplex people easily.

With Season 2 of Rumbleverse well underway at the time of writing, Iron Galaxy have added a few new moves to the game to really shake up the meta. Still, with Rumbleverse paying homage to the worlds of wrestling and fighting games, there’s still plenty of moves out there in the wild that could be adapted into the game. Iron Galaxy, if you end up reading this, you can have these for free.

1. Literally Anything Other Than An Elbow Drop

One aspect of Rumbleverse that really sets it apart from other battle royales in the genre is its enhanced focus on verticality. Players can scale buildings like a greased up version of The Hulk, and use this height to launch devastating elbow drops on whoever is unlucky enough to be underneath you. While this is great and all, there’s a wider variety of aerial offense in wrestling that could get some kind of representation.

Instead of an elbow drop, you could have a Five Star Frog Splash which deals more damage to opponents who are lying down, or a Leg Drop that travels downwards much faster. Maybe you could even represent the flippy lads of wrestling with a Moonsault or Shooting Star Press. Whether they’d be earned via skill books or through perks that’d change the properties of your regular elbow drop is another conversation entirely, but there’s enough wiggle room to allow for more than just one aerial attack.

While Rumbleverse features a lot of cosmetic items that reference the Lucha Libre style and culture, there’s not a lot of actual moves that actually feel like they’re from Lucha. There’s few flips, no arm drags, and perhaps most crucially of all, there’s no Hurricanrana move, which feels like it’d be a perfect addition to the world of Rumbleverse. It’s a staple of wrestling as it is, so it should be a staple of virtual battle royale wrestling too.

As a move, the Hurricanrana could serve as a buffed version of the Irish Whip (again, through perks and the like). Perhaps the Hurricanrana could launch players further than the Irish Whip, making opponents more susceptible to follow up damage should they be thrown against the wall, or more likely to be thrown completely off the map and into the water. It could even make a great tag team move, allowing your partner to continue the combo in the air.

Probably one of the most iconic striking moves in all of wrestling, the Lariat/Clothesline has been popping audiences around the world for decades, and no matter who performs it, it always looks like it’s about to decapitate someone. A move like that would have lots of potential in Rumbleverse, but how the Clothesline itself would work in a game like Rumbleverse leads to a few interesting options.

Skill Books in Rumbleverse have different rarities, going from green to blue to purple. A green clothesline could just be a basic clothesline, while a blue version could be a Discus Lariat and the purple version is a JBL-esque Clothesline From Hell. Another avenue could be to have the skill lead to two versions: a running one that just cleans out your opponent, and a standing version which grabs the opponent and spins them around before landing a beautiful Rainmaker.

Say what you want, but I’m a sucker for a good running knee/Shining Wizard, so I’d mark out seeing a move like that in Rumbleverse. Whether it’d be in the form of Adam Cole’s Last Shot, or Bryan Danielson’s Busaiku Knee, a good running knee would make for an excellent and impactful attack within Rumbleverse, though the game’s skill rarity system would allow for some variation in knee strikes.

Higher rarity skill books could lead to your devastating finishers, like a Busaiku Knee or a Kinshasa, which would deal massive damage to your opponent, but lower rarity knees could simply just launch the opponent into the air, similar to an attack in Tekken for instance. Essentially, you could use knees to set up opponents for air combos and juggles, which would make it especially useful for duos play.

Season 2 of Rumbleverse introduced the Edge family of moves; inspired by Razor Ramon’s Razors Edge powerbomb finishing move, the Edge skills allow players to pick up, move around then throw their opponent. Introducing a move like that opens the door for other moves, and there’s one kind of hold in wrestling that’s incredibly versatile and would make for an amazing addition to Rumbleverse: the Fireman’s Carry.

The Fireman’s Carry, which sees someone draping their opponent over both their shoulders, is as instantly recognizable as a wrestling move as the dropkick and the headlock, and it could be adapted into Rumbleverse’s skill rarity system easily. Green could lead to a Samoan Drop, blue could be a Death Valley Driver/Attitude Adjustment, while purple results in an F-5 or a Burning Hammer. There’s so many options within this one move type alone that it’s worth looking into.

Speaking of headlocks, they’re also seemingly absent from the world of Rumbleverse at the minute. While headlocks themselves are typically considered to be rest holds within wrestling, they’re great foundational moves that can be expanded into other, more devastating moves, and it’s those moves that should be added into Rumbleverse.

Obviously, the higher rarity version of the headlock could lead to some kind of running bulldog, a textbook wrestling move that’d deal some excellent damage, but the more interesting version could be the lower rarity type. Having a side headlock takeover could be a great way to launch the opponent for some more air combo and juggle potential.

Considering the Street Fighter influenced outfits, the Shoryuken-inspired Uppercut family of moves and the fact that the Super Vicious Attack is basically a Zangief super, it’s fair to say that there’s plenty of fighting game influence already within Rumbleverse, but there’s always room for a bit more. You know, as a treat, and what move says fighting games more than a legally non descript fireball?

As it stands right now, there’s no real projectile move in Rumbleverse, aside from just yeeting your weapon at your opponent, so a move like a fireball could add a new dimension to the game. Sure, it’ll probably lead to a lot of people complaining online about fireball spammers, but if you’ve got three whole dimensions to move in and you’re still being tagged by fireballs, it’s on you at a certain point.

Busters aren’t just guys who think they’re fly, but they’re an integral part of wrestling. Busters can mean many different kinds of moves, but the key thing they have in common is that one wrestler slams the other into the canvas with incredible force. If that doesn’t sound like they belong in Rumbleverse, I don’t know what else does.

Once again, the skill books and rarities could lead to some varied moves across the family of Busters. A simple spinebuster would make for an excellent green skill move, while Samoa Joe’s finisher, the Muscle Buster, would be an utterly incredible purple move. Again, with Rumbleverse’s verticality, hitting a spinebuster off a skyscraper would be utterly brilliant.

As we alluded to in the headlock section, submission moves might not mesh entirely well with something like Rumbleverse. A fast-paced brawler probably isn’t the best place to stick someone into the Walls of Jericho, but submissions are a huge part of wrestling. Surely, there’s a place for them in Rumbleverse, right? Well, there’s definitely room for one at least, and it’s the Full Nelson.

Perhaps better known as the Master Lock or the Hurt Lock, the Full Nelson has a reputation as a devastating submission maneuver, and it could definitely be featured in Rumbleverse. Specifically, the Full Nelson would be a perfect move for the game’s duos mode. One player could grab an opponent in the hold, then their partner could just start laying in the combos and special moves.

In a weird kind of way, Drivers are already in Rumbleverse. The golf clubs are, anyway, but any version of a Driver special move is nowhere to be found, which feels like Rumbleverse’s most glaring omission. Similar to the Fireman’s Carry family of moves, there’s a host of Drivers to be found in wrestling that would be excellent additions to Rumbleverse.

Obviously, the piledriver would be the perfect choice for a purple skill book, but there’s still other drivers that could be added as green and blue books, whether it’s the Michinoku Driver, the Tiger Driver, or even Kenny Omega’s One Winged Angel. The idea of the OWA not being the purple skill book is probably going to upset some people, but there’s a reason why the piledriver was banned in WWE.

READ MORE: Rumbleverse’s Extra Special Might Be The Most Satisfying Achievement