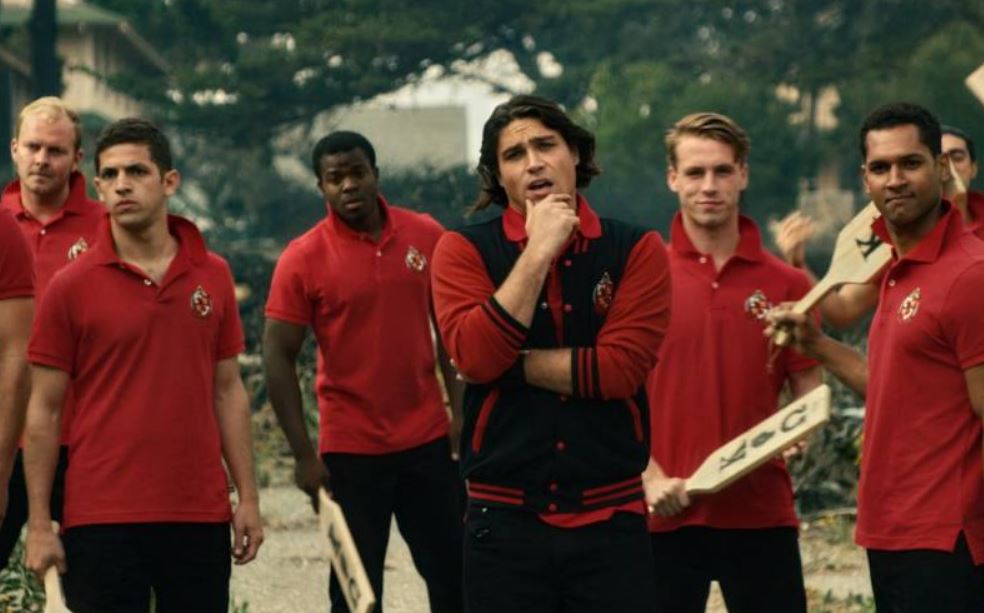 Rock Steady Row offers a glimpse at what college films might be like if they were set in a dystopian future.

In addition to the dystopian setting, director Trevor Stevens manages to throw in a bit of the Western genre by way of a rivalry between Kappa Brutus Omega and The High Society. Instead of being simple college fraternities, the two of them become rival gangs that are at war with each other and, alongside the the Western vibe, it’s one of the reasons why Rock Steady Row works so well.

A freshman (Hester Horwin) new to the Rock Steady University campus gets his bike stolen and he’s on a mission to get his bicycle back by any means necessary. The introduction of his roommate Piper (Diamond White) also serves as a setup to get the audience up to speed on what’s happening on the campus. This includes how every investigation by the school’s Dean (Larry Miller) seems to be ongoing after bikes are stolen during their freshman year. Despite what she tells him, he’s not going to stop until he gets his bike back. The two frats are involved with the bike market and getting his bike back won’t come as easily as he’d like.

Members of the Society, led by Augustus Washington III (Isaac Alisma), are always wearing blue suits whereas those in the Omegas, led by the villainous Andrew Palmer (Logan Huffman), are in a red color scheme and it wouldn’t be unfair to say that they are in tracksuits. Huffman, best known for his work on the short-lived V television series, is in high gear as Palmer. As far as movie villains go, Palmer is certainly up there. While Washington serves as an antagonist of sorts, the Omegas are clearly the worse of the two gangs.

There’s a sense of justice that’s served in watching the women of a sorority, thought to be extinct, beat up the Omegas at the end of the film, including Yvette (Allie Marie Evans), who goes through her own character arc in the film even though she’s used in the film to a minimum.

While Horwin’s unnamed freshman drives the film, it’s Diamond White’s Piper who gets the chance to shine in her performance of a female journalist. It’s unclear exactly when the film is set, but there is a reference to the longtime NBC News anchor Tom Brokaw when Palmer says he hates female journalists.

College should be a place to get an education, but Bomani J. Story’s screenplay makes the four years of collegiate life a wholly different experience altogether. Stevens gets some top-notch performances from a minimal cast, which are beautifully captured by cinematographer Nicolas Aguilar. Aguilar’s lighting of the darker rooms is able to perfectly capture the blue and red color schemes.

The best thing to like about Rock Steady Row is that college-set film does not fall into typical tropes for college movies. Even though a fraternity plays a large role in the film, it’s as far from Animal House as the film can get.