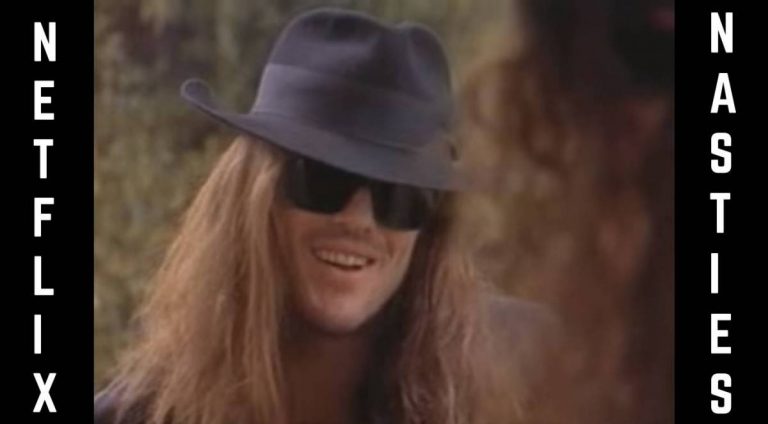 A rockstar hides in a sorority while his manager tries to kill him in this tedious film directed by David Michael Latt, founder of the film studio The Asylum. After a night on the town, rock star Jamie Z. crashes his car, and nerdy college student Alex hides him in her sorority handcuffed to a twin bed, since unbeknownst to them, Jamie Z.’s manager is trying to have him killed by hit men.

In a misguided attempt to represent these characters as college students, there’s a raucous party where people play Strip Risk, have a Stomp Out Satan singalong, and play with a ouija board, but these events often found in imaginary raucous college parties somehow fail in making the party any more interesting. Someone watches a movie-within-a-movie called Mennonite Fury starring a sexy Amish chick for some reason, and someone says, ‘Blubber-loving fish kisser’. Something is blocking the extreme upper-left hand corner of the frame during a large chunk of the movie, and it’s more than likely a lens hood.

After about 6 more months of movie, Alex and her friend look through a Jeep for the keys to the handcuffs, and the mic boom appears. Meanwhile, Jamie Z.’s demeanor flip-flops from annoyed, petulant, and litigious rock-star man-child to amorous, petulant, and shirtless man-child who can’t seem to figure out how to get himself free from a twin bed. I mean seriously, how difficult would it be to unscrew some of the bolts holding it together and just leave? Apparently, it’s pretty difficult, and Jamie Z. has never shopped at Ikea. If push came to shove, he could’ve just chewed his own wrist off, and I considered chewing my own wrist off from watching this film, and I’m hardly a rock star at all.

Speaking of twin beds, Jamie Z. and Alex have an inexplicable love scene involving brief armpit licking, guitar solos, studded leather belts, and acid-washed jeans, but it’s nothing to write home about because a majority of the action is obscured by their perms. During a key moment near the end of the film as a tepid gun showdown is happening in a bar, a crew member tries to hide behind something to avoid getting in frame, but fails.

Never showing any real musical performances, except for one sorority girl who torturously warbles while strumming a guitar, Rock And Roll Fantasy is a rock and roll movie where someone substituted actual rock and roll with generic Tiffany-esque pop music that wouldn’t have been out of place in shopping malls during the early 90s.

The plotline of Rock And Roll Fantasy seems ripped straight from a bodice-ripping Harlequin Romance novel where nothing really happens but someone substituted all the bodices with one absurd purple butt-floss leotard, and the only fantasy was the fantasy I had that the movie would eventually be over, but it never seemed to end.