REVIEW: Guardians of the Galaxy 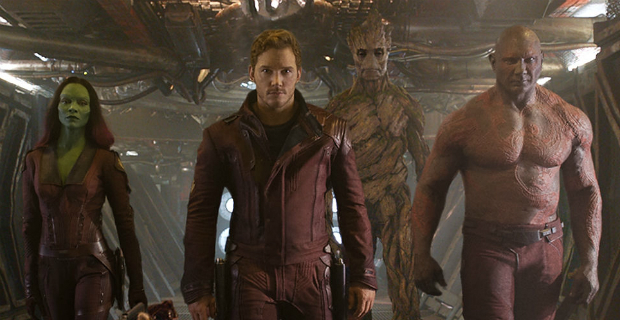 It’s barely August and there have already been 4 films based on Marvel Comics released this year – there’s no denying Marvel’s complete domination of the big and small screen as of late. Yet, despite the success of Captain America, The Amazing Spider-man 2 and X-Men: Days of Future Past already in 2014, Guardians of the Galaxy is no doubt Marvel’s most ambitious project yet.

Helmed by director James Gunn in his blockbuster debut, Guardians of the Galaxy tells the story of Peter Quill (Chris Pratt), a boy abducted from Earth following the death of his mother. Twenty six years later, Quill, (now under the name Star-Lord) steals a mysterious orb, leading him to cross paths with the ruthless assassin Gamora (Zoe Saldana) and bounty hunters Groot and Rocket (Vin Diesel and Bradley Cooper providing voices and motion capture). After teaming up with the vengeful Drax the Destroyer (Dave Bautista), the group attempt to stop the orb from falling into the hands of Ronan the Accuser, in turn serving the villainous Thanos, who was briefly glimpsed at the end of The Avengers.

Elsewhere on the impressive cast list is ex-Doctor Who star Karen Gillan, serving as Ronan’s personal assassin Nebula, whilst John C. Reilly also appears as a Nova Corps officer. As well as this, Benicio Del Toro returns briefly as the mysterious Taneleer Tivan, or, The Collector.

On the whole, the casting is sublime; highlights including Lee Pace as a frightfully convincing Ronan, and Bradley Cooper’s Rocket cracking out some of the best lines of dialogue ever heard in a Marvel film. In truth though, it’s Pratt that glues this cast together – his charm is almost childish, but he is charismatic and loveable, almost similar to the character in his role on Parks and Recreation. You get the impression that Guardians must have been a really fun film to make for this cast, which is odd considering perhaps the strongest character is a CGI raccoon.

Guardians of the Galaxy is truly impressive from the off; the visuals and special effects are mesmerising, although it’s more along the lines of Star Trek than 2001: A Space Oddyssey. Quill’s use of his Walkman means the film is fittingly soundtracked by his taste in classic rock (there’s everything from Jackson 5 to 10cc) which is further reinforced by the many 80s references dropped by his character throughout. James Gunn’s ace in the hole however, is the humour. The onscreen banter between the main characters is genuine and sharp, Rocket steals the show and is downright hilarious, and there’s even an unexpected dance-off in the climactic scene. Nothing feels too forced either – the humour in The Avengers began to wear a bit thin – and it’s a real testament to James Gunn’s directorial ability that he has reinvigorated the superhero genre with this comedy, and ignored the set-in-stone formula of the previous films by the studio.

Aside from appearances from Thanos and The Collector, who were both only featured as post-credits scenes in previous films, Guardians of the Galaxy does well to avoid referencing the other instalments in the ever expanding Marvel Cinematic Universe. There’s no brief cameo from Nick Fury for instance, which is great, because Guardians builds the parameters of its own reality so fantastically well that it’s easy to forget that it will soon become a small piece in a much larger puzzle. This is Marvel’s first original development since the first Captain America film back in 2011, so it’s refreshingly entertaining to watch a different set of characters, particularly those of a lesser-known comic.

Whilst the fantastical outer worlds in space have briefly been tackled before in Thor and its sequel, Guardians of the Galaxy represents a whole new frontier for Marvel; we’re thrown headfirst into a whirlwind of talking trees and Infinity Stones, yet there’s no need to even question why. Perhaps what James Gunn has done so well is what George Lucas did nearly 40 years ago, created an alien galaxy with real, bona fide and believable characters to inhabit it. There’s even a relatable human connection in Guardians (much like Star Wars), as the opening scenes of the film deal with the death of Peter Quill’s mother. There’s obvious character comparisons too between Star Wars and Guardians; Groot is just as lovable as Chewbacca, Gamora could be a more feisty and skilled Princess Leia and of course, Star-Lord has the same lovable rogue status as Han Solo (in fact, Marvel President Kevin Fiege has himself mentioned that Quill is “Marty McFly meets Han Solo”).

In all honesty, it’s almost too easy to draw comparisons between the two films, and although the cinematography of Guardians as a whole will never be considered on the same scale as Star Wars, maybe it’s the tone of Gunn’s effort that fans can appreciate. In addition to the 80s soundtrack and references throughout, Guardians feels like a genuine revitalisation of the fun action movie – which almost feels misplaced in the genre as of late – with a nostalgic throwback to the times of Back to the Future, Star Wars and Raiders of the Lost Ark.

Guardians of the Galaxy is a hilariously enjoyable action film. And much like Peter Quill himself, it doesn’t take itself too seriously, so neither should you.