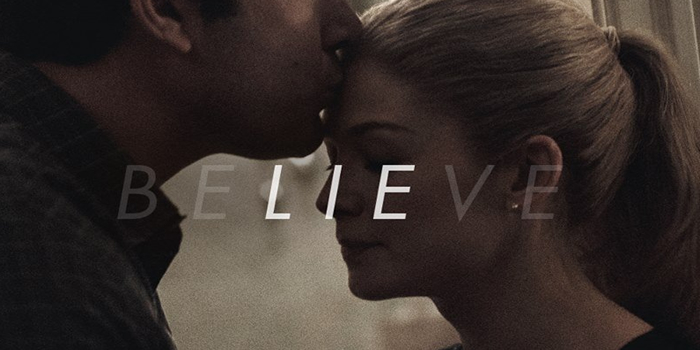 David Fincher’s measured, glacial adaptation of the bestselling book gives us a horror movie with a difference. Moderate spoilers ahead.

A young woman lies at rest. We can’t see her face as she has her back to the camera. Then, she turns towards it, gazing up placidly at an unknown someone. She is beautiful and inscrutable. All the while, Ben Affleck narrates a short, ominous monologue. It’s a gentle but sinister opening, and it sets the tone perfectly for Gone Girl, an almost perfect adaptation of a virtually perfect book.

It’s the stealthiest horror movie I’ve seen in some time. There is a nightmarish monster at the core of Gone Girl, and that monster is the failed relationship between Nick and Amy Dunne, two beautiful people with seemingly good intentions who have turned into each other’s worst enemy. One morning, Amy disappears and Nick becomes the primary suspect. From that point on, things only get worse.

Over the course of two and a half hours and via a number of flashbacks mixed with the present day, we see that monster devour and ruin a number of lives. Trent Reznor and Atticus Ross’s brooding score is an aural bed of unease and malevolence. One scene is bloodier than the entirety of the Texas Chain Saw Massacre. Like the book, there is no tidy ending or any real sense of closure, just a gaping void and the promise of more uncertainty and unhappiness.

If all this is making Gone Girl sound like some sort of purgatorial drudge, then far from it. The film is a perfectly executed dramatic thriller and proof, yet again, that director David Fincher is peerless and inimitable. The cast are also brilliant. Ben Affleck is perfect as Nick Dunne, well-meaning but seflish and oblivious to his wife’s needs. The supporting cast are fantastic (special mention must go to Neil Patrick-Harris, who turns his patented brand of charm into something a lot more unlikeable) but it is Rosamund Pike who will be walking away with an armful of award nominations (at the very least) for her performance as Nick’s wife Amy. She may lack some of the joy that was present in the early stages of the novel, but she nails the core of this glacial, single-minded character.

Much has been made of Gone Girl‘s depiction of gender roles. I’d consider myself a sensitive soul when it comes to this sort of thing, but from my perspective (and that of my female friend who I watched the film with), this doesn’t feel like a film that gives goes out of its way to pour scorn on women or, for that matter, men. If Gone Girl is anything, it’s misanthropic; no-one, male or female, comes out of this film looking particularly good.

No movie is without its flaws, and Gone Girl is no different. Affleck and Pike’s chemistry in the early stages of their on-screen courtship lacks the fizz and believability as depicted in the novel. On the page, Nick and Amy were two souls who found each other and rejoiced in the fact before things went south. Their love felt vibrant and real. In the film, they are just two pretty people who are together.

Much was made of screenwriter Gillian Flynn’s decision to rework her book’s final act. This could have made for a tantalising prospect but the fact is that not a great deal has changed. It does justice to the source material, but at the expense of any satisfactory narrative conclusion.

But I’m nitpicking. Gone Girl is an absorbing, gripping film, awash with talent and packed with insight (and it includes more laugh out loud moments than any Fincher movie since Fight Club). It’s a love story from hell but also one of the best things you’ll see this year.