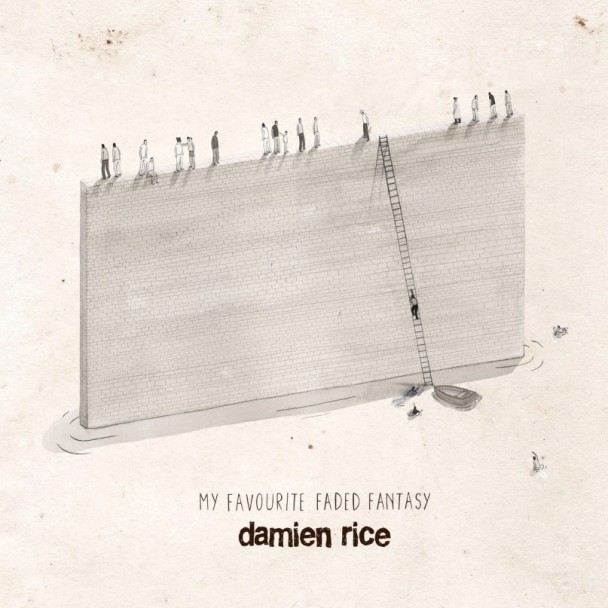 After 2002’s masterpiece of an album 0, and the ‘difficult second album’ that was 2006’s 9, reluctant star and enigmatic troubadour Rice sacked his band, walked away from it all, and went into hiding in Iceland (and then Los Angeles) for eight long years – but now he’s back, and how.

For me, Damien Rice’s music has always been synonymous with the phrase (that isn’t actually a phrase) ‘smooth grit’. Every song of his is like an open wound, visceral, aching with frustration and rage; and every one of them beautiful.

Former musical – and romantic – partner Lisa Hannigan does not feature on My Favourite Faded Fantasy, and it would be all too easy to see this most recent heartbreak album – one full of allusions, certainly-  in that light. Regardless of any literal heartbreak backdrop, Rice certainly sings about relationship breakdown with a renewed tenderness and honesty – even if he says this album is not coming so much “from a victim place”.

Album-eponymous single and first track ‘My Favourite Faded Fantasy’ starts us off with Buckley-esque twangy guitars and more breathy vocals – not unlike Buckley either – before strings and drums come crashing in. The mournful introspection of ‘The Greatest Bastard’ – “I never meant to let you down” – is so raw and personal it almost feels wrong to listen to it, but then Rice has never been one to shy away from such self-recrimination in his songs.

Perhaps more conventionally melodic than previous offerings, and thus arguably more ‘commercial’ than O (I can practically hear the X Factor version of ‘I Dont Want To Change You’ already – WASN’T CANNONBALL ENOUGH TO SATISFY YOUR THIRST FOR BUTCHERY, COWELL?) it isn’t your standard offering of radio-ready singles of pop music form; with just 8 songs My Favourite Faded… clocks in at 50 minutes, with only one song – ‘The Box’ – coming in at under 5 minutes, and another – ‘It Takes A Lot To Know A Man’ – sprawling dreamily across 9 minutes. These tracks aren’t just songs – they are brooding poems of brittle anguish, regret, and vulnerability.

If it all sounds and feels familiar enough, the input of the indomitable Rick Rubin – not to mention a renewed vigor stemming from a long absence and self-exploration – My Favourite Faded Fantasy’s highs and lows are as touching as they are powerful. It manages to steer clear of the overly self-flagellatory with gorgeous acoustic frameworks burgeoning into lavish cinematic orchestral conclusions, each song swinging through pop rock, folk, and something else entirely Damien Rice.

It all comes back to that ‘smooth grit’: marrying Rice’s vocals – one minute a whispered lament, the next an anguished cry (see: ‘Colour Me In’) – with crunching tackles of sound – percussion, guitar strings rattling – produces something that fizzes and burns right in the heart of you.

My Favourite Faded Fantasy feels as intimate and raw as anything Damien Rice will always feel, but it’s bolder and braver, more self-assured. The introspection that so suits him is still there, along with the regret and resignation, but now so is something else; the knowledge that he has a fresh start.

The choral echoes of penultimate track ‘Trusty And True’ – “we cant take back / what is done, what has passed / so let us start from here” – and the soft female vocals on album closer ‘Long Long Way’ tell us that his past musical forays and relationships and all that comes with being catapulted into stardom will always inform his music, but after 8 long years he knows himself better, and he’s back.

As he said his press release, “Sometimes you have to step away from what you love in order to learn how to love it again.” That may well be true, but please Damien, try not to leave it so long next time.