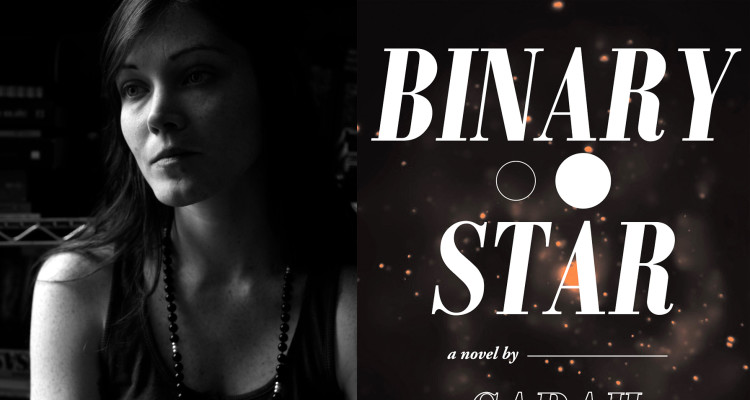 Sarah Gerard’s debut novel, Binary Star, is something special. The book itself acts as an awe inspiring beauty, the themes it discussed in depths and it’s tragic but captivating characters keep us wanting to venture into the further unknown than any astronaut or child with a sense of curiosity does.

Binary Star follows two lovers across America. The main difference between this and other road novels is that the dysfunctional leads of Binary Star makes Neal Cassidy and Jack Kerouac look like a family vacation, compared to the events that occur in this short novel. The two leads are a young girl who has bulimia, anorexia, anxiety and depression and her partner, John, who is an alcoholic who is cruel and impulsive but ultimately the man the lead wants to be with. This is a road novel for the twenty-first century. The lead female, between giving beautiful descriptions of space and stars to her students, or to herself, worries about Instagram followers and retweets. She will change her Facebook profile picture to one of her and John to remind herself that she is okay, and she will refuse to eat and worry about her body, as her weight in pounds becomes closer to the days she has left on the planet. The most powerful testament of this novel may be these next few words, so heed caution: even though a dog dies, this is not the saddest point in the novel.

Despite the troubled narrator and her judgements about everyone else, we never hate her. We don’t even hate the bums, academics and everyone in between. Instead Gerard manages to bring us into the voice she created, as if it was one of our own, speaking out, making us say: we hate everything.

The beauty of Binary Star, however is the language. Each word is chiseled onto the page with such beauty and importance that one assumes no other word could perform the same job as the one chosen. The sentences are spaced apart, reflecting of the narrators damaged mind, her damaged relationship, the visible space where her ribcage is.

The power that the narrator presents in her knowledge of astronomy is initially beautiful, and ultimately haunting. Perhaps it’s the idea of the monolith from 2001 but space can be seen as something beautiful, vast and comforting. Binary Star, or the themes that exist within it, make space seem lonely, that we are trapped with this emptiness – the same emptiness that is in the narrator’s stomach and life, perhaps – making this experience far more Alien than anything idyllic.

Binary Star is nothing but a confession of pure, tormented beauty. Dysfunctional and perfect, it captivates the reader in a unique voice and way of storytelling that will seem unfamiliar, but what they are demanding in the future. Not suitable for sensitive eyes, but suitable for those who want to feel pain, understand what it’s like, to see the portrait of the neurosis that exists behind the best of us.