When I first saw the trailer for this movie, I was enthralled. For those who haven’t seen it, it shows Bradley Cooper as the now-deceased US war veteran Chris Kyle providing sniper support to a squadron of troops in a square below. A woman and a child enter the scene, and the woman hands  an explosive to a young child. Kyle relays this to his superiors, “it’s your call.” They reply. Fade to black. Title card.

This hinted at a refreshingly honest movie about the reality of war, of difficult choices under difficult circumstances. I hoped that this kind of situation would lead to Kyle questioning their orders, whether they could actually be the bad guys. It seemed really, really intriguing. This could not be further from the truth. Imagine if The Hurt Locker had all the subtlety of a sledgehammer, one dimensional characters, a poor script, and came served with generous helpings of blind American patriotism, and you’re about halfway towards understanding what makes this movie tick.

Covering Kyle’s four tours of Iraq – the first of which he is deployed to following the events of 9/11, despite the fact that in reality the Iraq invasion occurred two years later – American Sniper at times feels like a bizarre joke that misses the mark. As the film drags on though (and it does drag) you begin to realise that there’s no shred of irony to be found. Whenever Kyle is asked why he is in the military his stock answer is ‘America’ or a variant upon that. His character is so frustratingly one dimensional; it seems like literally his only motive is to protect America. That’s it. 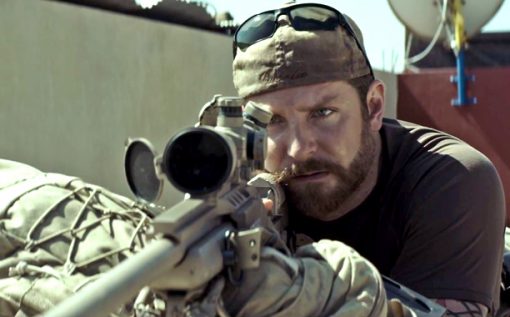 In one moment where the movie threatens to redeem itself (spoiler alert: no such luck) a fellow soldier talks to Kyle and begins to raise questions about whether what they’re doing in Iraq is right. Kyle replies with something along the lines of ‘no, but… America…’ and within minutes he’s gunning down Iraqis again.

While we’re on the subject, every Iraqi in the movie – even the ones that seem nice at first – turn out to be evil, and our macho caricature of a lead character is only too gleeful in reminding us of that fact, whether he’s gunning them down without mercy, or waxing lyrical about why they must be destroyed to his fellow soldiers. The movie views the world in such a black and white way that it’s embarrassing.

Perhaps just as worrying as this blatant Islamophobia is the overt glorification of war; the whole thing plays out like a military recruitment video. In fact, the only way it could’ve been more obviously pro-war is if the words ‘ENLIST NOW’ flashed up on the screen every minute.

At the end of the day people watch movies (especially action movies) as escapism; people want to pretend they’re living vicariously through the protagonist for a few hours. In American Sniper the protagonist is named a ‘hero’ from the first time he fires a gun at a live target. By the end of the film he’s routinely called ‘legend’ by his contemporaries, as a goddamn nickname. Clint Eastwood has defended the movie, saying it’s anti-war, but I doubt even he believes his own bullshit. To a young impressionable kid, this film would make war look awesome I’m sure. 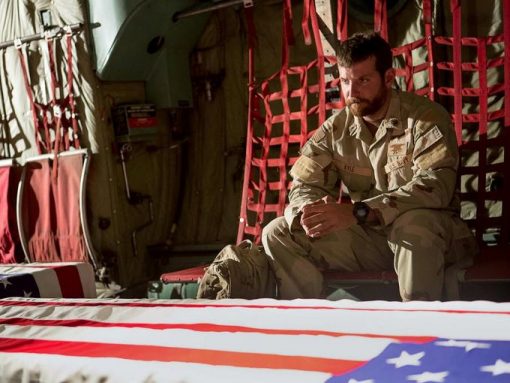 The film’s saving grace is a number of deftly constructed action set pieces. In fact, whenever the characters shut up (usually about how great  America or how great Iraq is not) and let their guns do the talking, the film really jumps into gear. Despite being a sniper, Kyle isn’t afraid to get stuck into the thick of the action, and this is typically where we see some of the film’s highlights. A rival sniper adds an air of unpredictability to proceedings, which is a welcome addition to some already impressive viewing. However, good action sequences alone do not make a good film.

It all seems laughable, until you realise that this film is a bona fide box office and critical success, having picked up 6 Academy Awards Nominations, and grossed more than $200m to date. To suggest it’s a train wreck would be to go too far; it’s not an awful film, but sadly it’d be a stretch to suggest it’s much good either.

It’s a sobering thought that America is currently fawning over this movie, about a Caucasian American murdering foreigners, while Selma, the story of Martin Luther King Jr, an African American standing up to Caucasian oppression, has slipped well below the radar. If American Sniper wins Best Picture ahead of its fantastic competitors in the category, it’ll be nothing short of farcical.

(Oh, god, I forgot to talk about the fake baby. Yeah, it’s really obvious that it’s a plastic baby. Embarrassing.)