The few flaws Resident Evil on Switch has shouldn’t detract, but the price might. 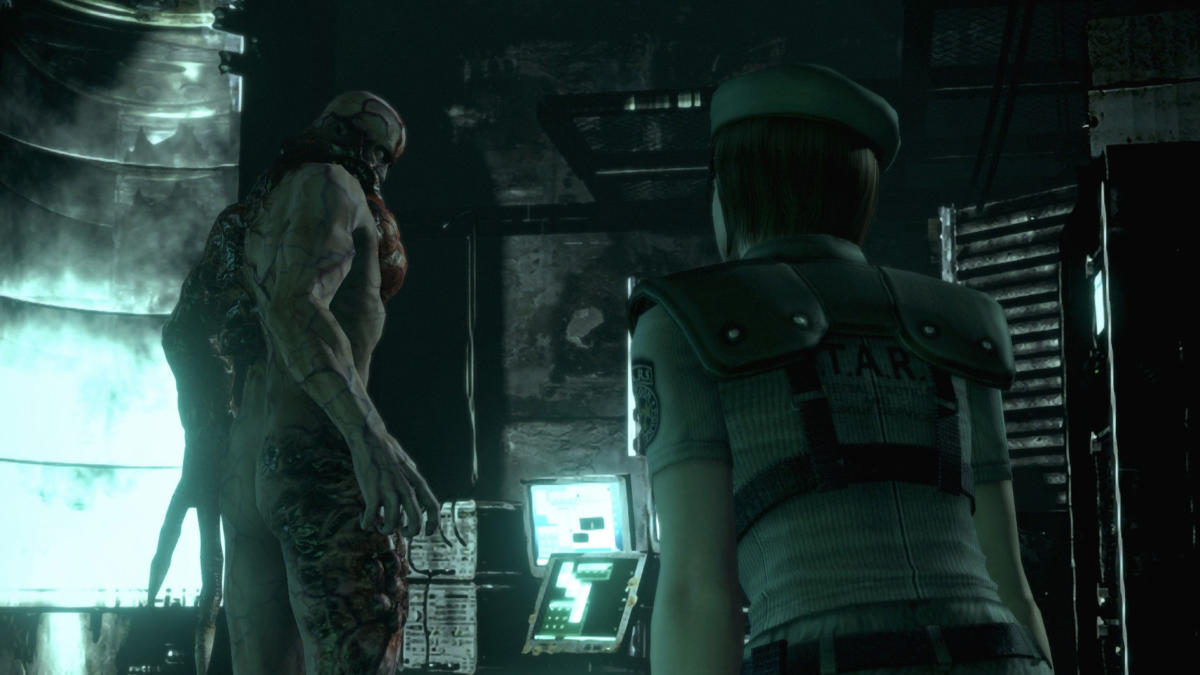 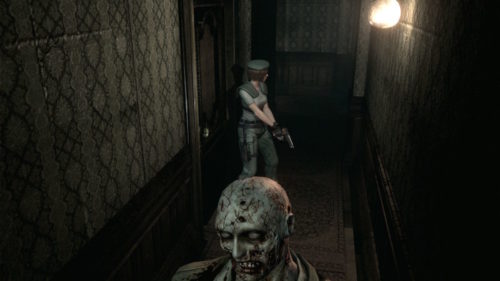 I have come to terms with the fact that I will repurchase certain games in the Resident Evil franchise whenever they are ported to a new system. This is a thing that I know others share in and that I am positive Capcom relishes. When I saw that Resident Evil HD Remaster was coming to the Switch I knew I wanted a copy. Something felt right about bringing all three of these RE games back to a Nintendo console after their debuts on the Gamecube, but I wanted to start with this one and relive those first nights of survival horror all over again.

There isn’t much to say about the basics of this game to any fan of the franchise. There are the smaller performance questions and a few potential changes, but for the most part, this is the most recent iteration of Capcom’s masterpiece on a new platform. I do think this may be an opportunity for newer fans of the series or those who simply never got to experience the remake or remastered versions to finally jump in head first and fight for their lives. There is a solid adventure here for those willing to give an old classic a shot. Pick Chris or Jill (like I did) and traverse the wonderful Spencer mansion to uncover its secrets while running from or shooting at some truly vicious creatures. It’s an incredibly fun time. 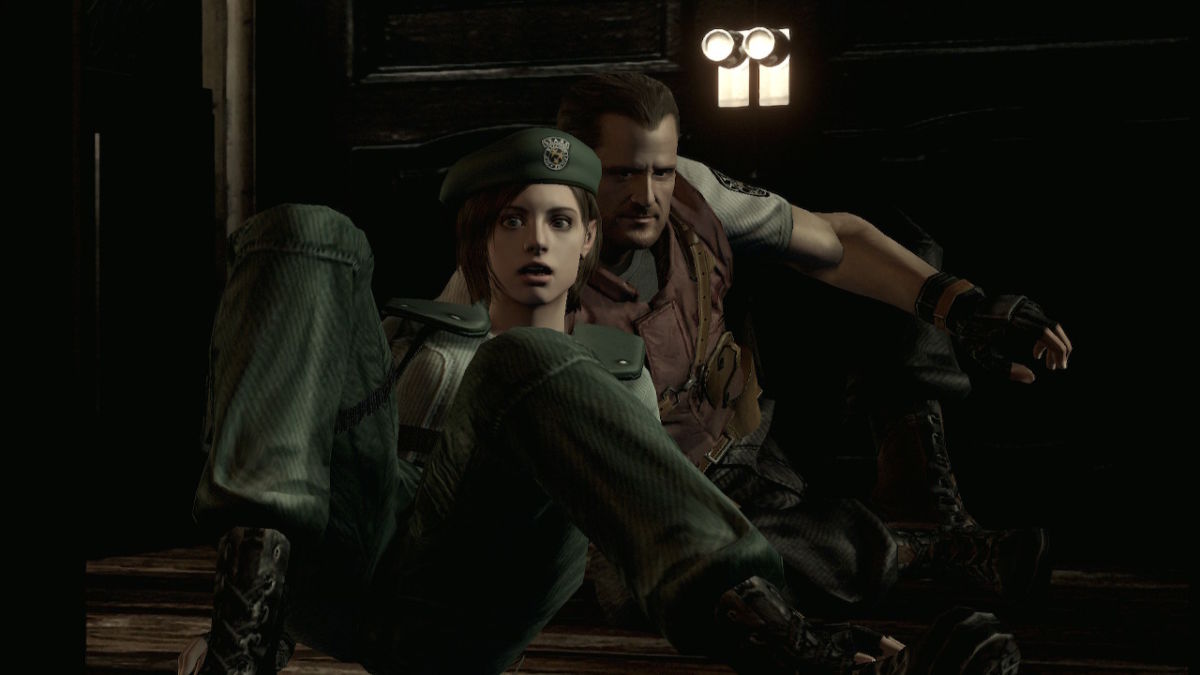 READ NEXT: The Best Zombie Games You Should Be Devouring

Starting up the game was familiar and welcoming, though Resident Evil on Switch is seemingly a straight port with nothing added. There are no new modes or frills to distract players and anyone who played this on another console or PC will know exactly what they are getting. This may disappoint some, though, those who thought this version of the remaster of the remake being late to a new console might bring some new features or modes.

Although the game itself was familiar, something about the controls wasn’t. At first, I thought it was simply because I had played this title so many times with a Gamecube or PlayStation controller and the standard Switch joy-cons would take a little bit to get used to in a game where my muscle memory was trying to kick in. But this lingered for a long time. Getting used to the movement took a while and I found myself using the alternate controls much more than I used to. It took me going halfway through a playthrough to feel like I was comfortable again. Once I did, though, shooting zombies felt right again and I even got my dodging skills back up. This isn’t a negative, as the game still performs well, but more of a personal observation that I think some other longtime players may share. 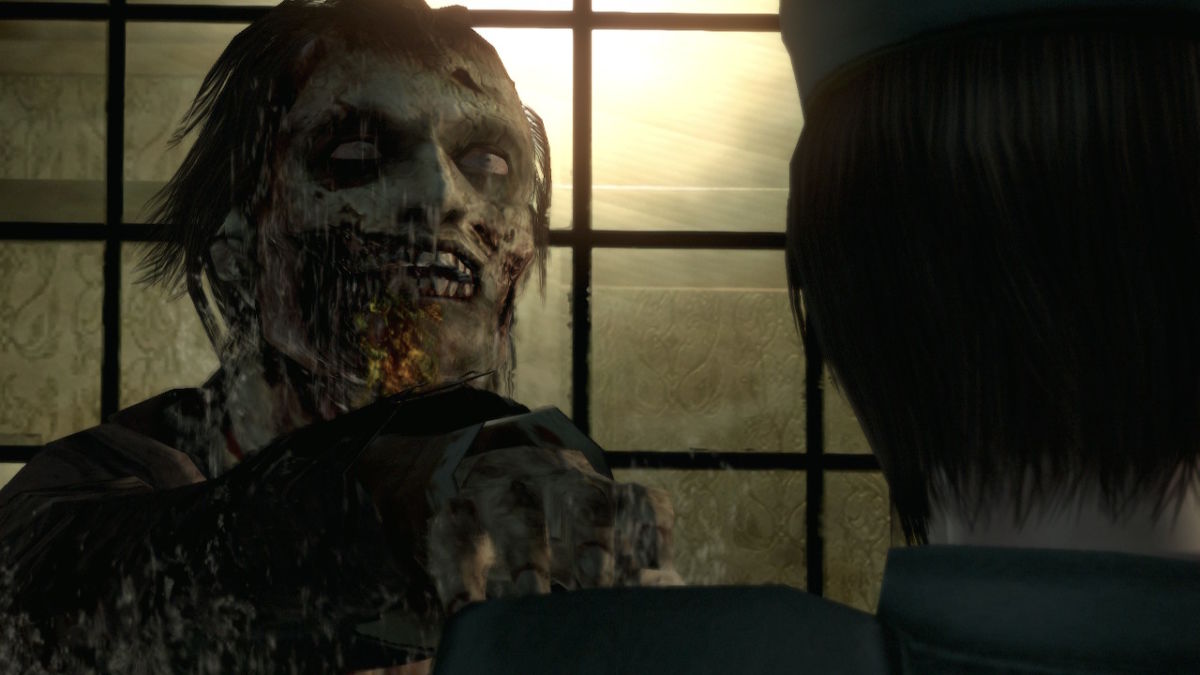 The controls were a bit tougher in handheld mode when attached to the screen, but setting up the kickstand and playing at my table when I could made for a fun experience. Having zombie horror survival excitement on the go seemed like too good of a prospect to pass up. RE: HD Remaster runs well without being docked, with no additional cost to the experience. Perhaps because of the stationary cameras and pre-rendered backgrounds, playing in handheld mode seems to cause a little less eye strain and I wonder if it would help with those who say this mode sometimes causes motion sickness. The only thing that felt odd in on the small screen was the load times. I love the doorway transitions but I couldn’t help but feel that some lingered more than usual. Just enough time to question some of that artificial tension.

Visually, the game looks fantastic and some of the lighting aesthetics still catch me off guard in how good they are. A few rooms of the mansion cause sheer awe. Seeing how engaging these backgrounds can be makes me sad that so many have moved away from pre-rendered set-pieces. With that said though, I did notice that some of the areas looked incredibly dark, especially in the handheld mode and a few textures seemed grainier than I remembered. The classic opening cutscene for RE gave me a serious nostalgia kick, but I paused toward the end. I realized that some shots seemed a little more pixelated on the new console, especially on a second viewing. That may seem like a list of faults, but these things were all very minor and faded into the shadows once the action picked up. 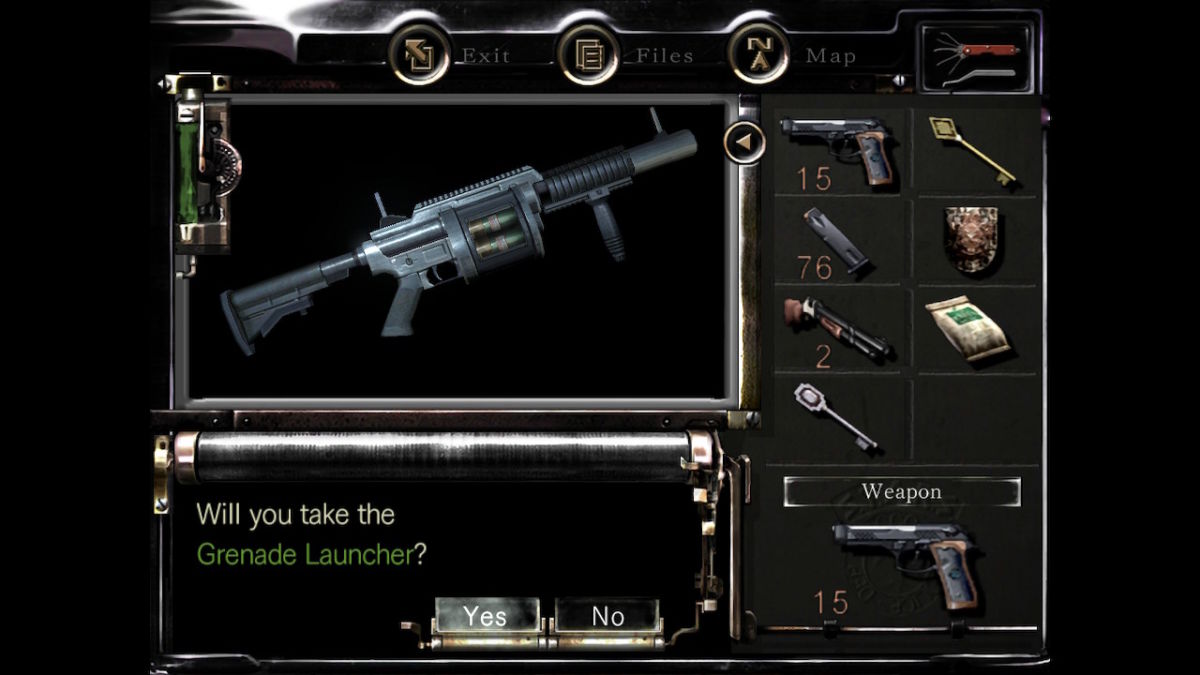 When talking to people and seeing some comments on the game I keep noticing how people feel that RE: HD Remaster is holding on to some shortcomings. Certain elements like tank controls get listed as trappings of the past and even seen as negatives for the game. Whereas I can see the aforementioned control scheme being considered a limitation, things like ink ribbons and limited item slots are not to me. These are fundamental mechanics in survival horror that help the overall experience. Sure, it just seems like an inconvenience when no one else uses them, but I don’t mind playing by the game’s rules — as long as it does actually help with that tone.

Jumping back in was nice — refreshing even, that classic fix with its new coat of paint — and this port of the game may become my preferred version. Mostly because I have been playing my Switch a lot more, but the ability to play it handheld doesn’t hurt in the slightest. The game is cheaper on other platforms though and $30 for a game someone might already own on another system could certainly be just above the asking price. I recommend it still, for new players and old fans, as returning to the place where the nightmare began is a treat.

Verdict
Resident Evil on the Switch is a familiar experience with some excellent gameplay that can be enjoyed in handheld mode. The few flaws it has shouldn’t detract, but the price might.
8.5