How to mold(ed) your horror series in a direction. 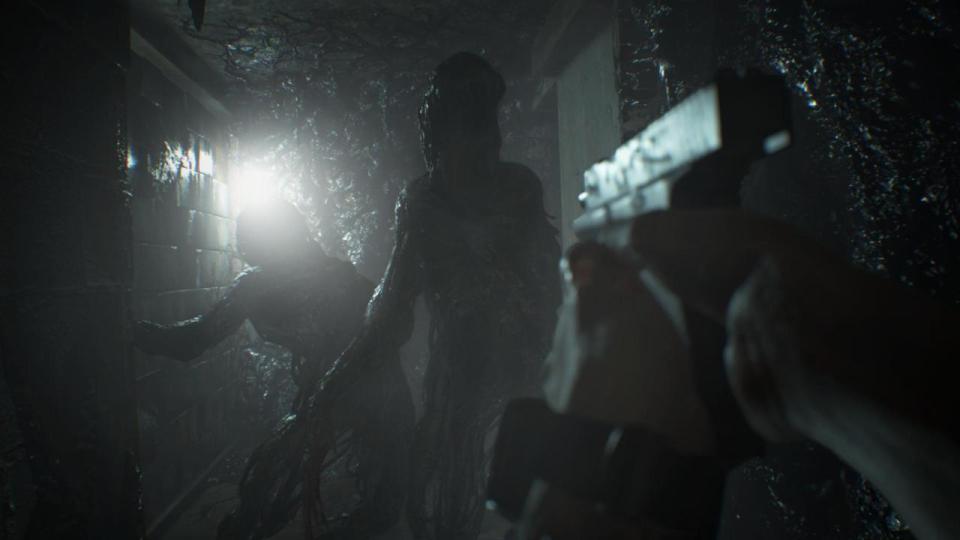 People love to be scared or explore what terrifies them most with the comfort of a screen between them and the terror. But just as there are different kinds of people, there are different types of fear and discomfort. From the humble monster movie to the often too real slashers, there is a sub-genre of horror for everyone.

For each subgenre of horror, the creative leads need to devise a plan that will heighten the tension, and one of the best examples of this is Resident Evil 7: Biohazard‘s focus on the first person while it engages in much more extreme showcases of body horror.

How First-Person Can Heighten the Tension of Body Horror

Body horror is any display of mutilation that happens to the human body. It aims to scare by showing people in the throes of pain or while losing control of their own self. They can be shown becoming another entity right in front of the viewer, more monster than human.

As Bloody-Disgusting puts it: “It disturbs, because it’s disturbing and gross to look at. On an emotional level, though, body horror instills a deeper level of fear because we tend to fear losing who we are as people.” There’s two elements to keep in mind: Body horror is gross and it can represent a person losing a sense of themselves.

The Resident Evil series is no stranger to body horror as zombification is one of the most common forms of this sub-genre. However, Resident Evil 7: Biohazard takes it a step further with its emphasis on a single family that is twisted from the inside out by an unknown force that slowly makes its presence felt.

Ethan Winters shows up on the Baker family property completely unaware of the state of affairs in the household. The player, in the first-person perspective, gets a hands-on look at all of the details of the property, such as newspapers or closeups of dead animals. The previous entries in the series were all third person, which is a step removed compared to the 2017 entry. A person isn’t going to be eye level with the decay of a corpse if they are looking over the main character’s shoulder like a bystander to the grotesque.

They need to be a direct participant, and Biohazard sets expectations early when Ethan enters the house. The fridge has a mysterious sludge spilling out of it, there’s a stew that’s been sitting out for way too long as cockroaches skitter out of it when the lid is lifted, and nothing looks like it’s been cleaned this decade. There is nothing between the player and these scenes — they must acknowledge what’s in front of them.

The camera seems to be inches from some of these disgusting objects. The house is already being set as someplace that is too gross to be in. How could a person bear living in these conditions?

Biohazard has a great mechanic where Ethan can watch videotapes from the past and see what other characters dealt with in sections of the house, with the player even assuming control of a character within these tapes. In the first tape the player comes across, they take on the role of Clancy, a cameraman for a freelance reporter.

The tape shows how the camera crew went through the house and found a secret passageway to the basement, but it also highlights something weird that took place. One of the crew, a man named Andre, mysteriously disappears. He isn’t found again until Clancy gets to the basement, where Andre is standing against a wall for a moment only to fall onto Clancy.

Back playing as Ethan later on, the decaying corpse of Andre floats up from the waters within a foot of the player’s view. The skin on Andre’s face is now coming off in strips, an eye is missing, and his mouth is seemingly gone. Andre is barely recognizable here, and the stomach-churning moment is a reflection of what can happen with one misstep in this house.

When Ethan is able to reconnect with Mia in the basement of the Baker home, she is talking excitedly about the need to get out of the home but then disappears suddenly. The next time Ethan sees her, she is crawling up the basement steps in a way that seems like something out of The Grudge before she pounces and starts waving a knife around.

Her pale skin is now outlined in what looks like black veins, and her face has taken on a more monstrous appearance. Her previous demeanor is all but gone, and it gets to the point where the player has to take a hatchet to Mia’s neck. She falls back with blood spewing from her neck, but this blow that should have killed a normal person doesn’t stop Mia.

Mia’s sickness is actually being orchestrated by a woman named Eveline, who was genetically enhanced to become a bio-weapon. However, since she managed to escape “The Connections”, the organization that created her, she wanted to create a family for herself.

After Jack found her in the Bayou, he took her home to care for her and Mia, but Eveline began to take over the minds of the family until she had complete control. She also has the ability to turn people into things called the “Molded,” people that have been turned into sludgy humanoids. They have nothing left of who they once were, and will do whatever Eveline wants them to.

Eveline embodies the terror of body horror through these two abilities: A quick death with the Molded or a slow one where they lose control of their own actions and become a more terrible monster.

What’s worse is that the true nature of the family’s situation isn’t known at first; they might simply be seen as cannibal psychopaths rather than the tragic characters that they truly are. During the game, the player will pick up handwritten notes and pictures of the family before they were infected by Eveline’s curse. One of the photos shows that Jack was a marine and a loving father at one point. Even Lucas was a promising young engineer based on his diary entries.

The player will even have the chance to talk one-on-one with Jack when they are temporarily bound in Eveline’s sludge in a scene that’s reminiscent of the family dinner scene at the beginning of the game. Jack is soft-spoken, and there is still kindness in him despite his desire to free his family from Eveline’s control.

He doesn’t want to be committing these sins. He wants the player to end things. And after all the events of the game, this final plea from someone that has slowly had their humanity taken from them is both heartbreaking and deeply disgusting, especially as he looks the player in the eyes like he has never done before. The clear difference in personalities is heightened by the proximity of the player’s view in the scene.

Ethan Is a Captive Audience

The Baker family all have an opportunity to get up close and personal with the player. The most iconic scene from the game has Ethan sitting at their dinner table with them as they feast on human remains. The player has to look each family member in the eye as they chow down, each member of the family showing the same black vein symptoms as Mia.

Throughout Ethan’s time in the Baker’s home, he will have the misfortune of coming face to face with the very worst of the Baker family. Jack will be the first and the one who tries to take control of the situation by brute force, coming across as an unstoppable giant. In one scene, he’s burning alive as he holds the player against a wall, and later on, he proves his strength by shooting himself in the head as the player watches aghast. However, by the end of the story, the regeneration appears to have been waning as Jack is a full-on monster just like the Molded.

His body is a sludgy mess with blood red eyes appearing over his true form, and he takes up the whole room, which only feels more all-encompassing by the field of view of the camera. Lucas follows suit after being attacked by Ethan at the end of the game, melting on the floor and becoming a monster just like his father, with the player seeing this transformation firsthand this time.

With Marguerite, the player is offered a more traditional one-off boss fight, but she appears much more monstrous from the get-go. Her arms are long and lanky, while her body has taken on a bloated appearance, with her guts beginning to spill out. She will crawl around the innards of the greenhouse and try to grab onto the player, which forces them to look her directly in the face as they try to slash at her with a knife.

Even Eveline herself exhibits signs of body horror as the game progresses. When her powers are kept in check, she is portrayed as a little girl but begins to age drastically the longer she goes without the Connections’ treatment injection. For most of the game, she is bound to a wheelchair and seems incapable of speech from her real body. She pops up randomly around the house, staring at the player without directly interfering. At the end, she too becomes a giant monster that destroys the Bakers’ home and nearly crushes Ethan.

These interactions are great examples of how Resident Evil uses its first-person point of view to direct the gaze of the player. It’s a more immersive experience that forces the player to look directly at the horror in front of them, rather than the back of a character or taken out of the moment completely with a cutscene.

Resident Evil 7: Biohazard places a lot more of the fear in the interactions between the player and the individual encounters with the Baker family and the Molded. The player is forced to be a direct participant in these events and can’t hide behind the silhouette of Chris or Leon. The disgusting transformations and mutilations must be experienced as if they are happening — there’s no hiding this time.

Biohazard’s tension and horror are heightened by the immersion that the first-person point of view gives to the player. It also provides the developers more control over the specific angle that the character is viewing events, almost like they are forcing open the player’s eyes like Alex from Clockwork Orange. The only course of action to get away from these frights as they happen is to simply walk away from the game, but where would the fun be in that?