Ranking The SSX Games From Worst To Best 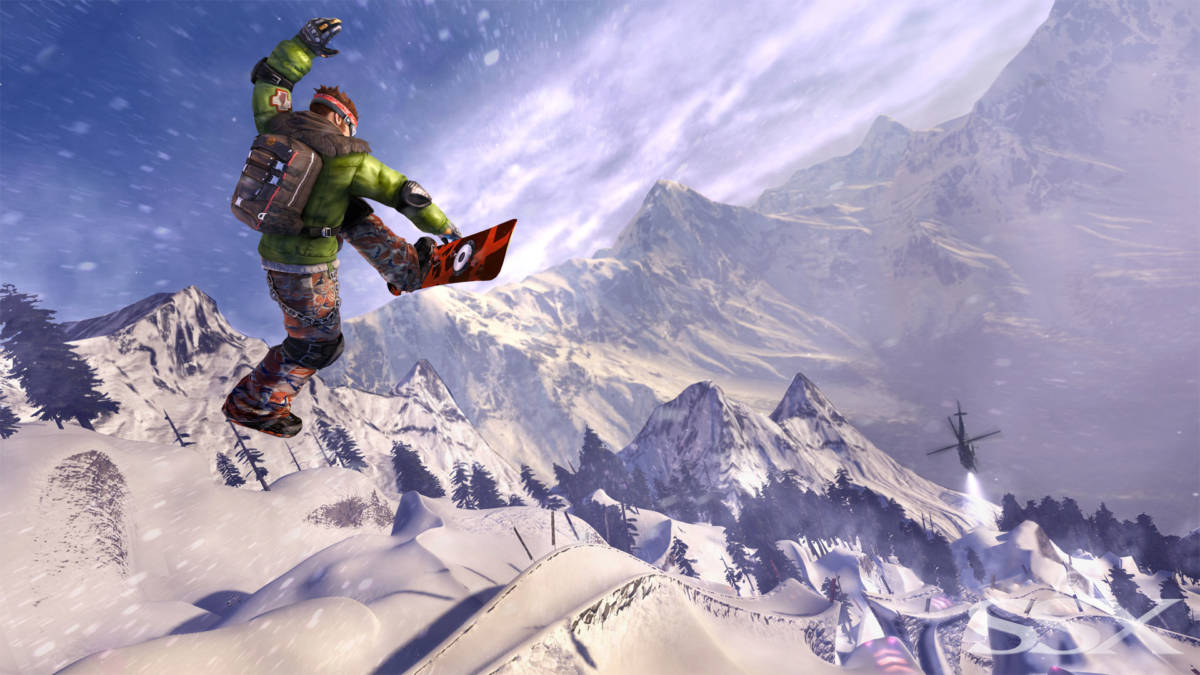 There’s been plenty of snowboarding games over the years that have tried to take the sport to new and improved heights, but none have ever come close enough to topple the true ruler of the genre. Steep was a decent effort, and Amped 3 was a bonkers hodge podge of fun that’s pretty overlooked, but there’s only ever been one undisputed king of the genre, and that’s SSX.

Developed by EA, the SSX series has been one of the most consistently excellent series of games in history, offering enjoyable snowboarding action that focuses on high speeds, big airs and incomprehensible tricks, topped off with some incredible soundtracks. However, with a decent amount of games (and hopefully more on the way), it’s hard to know which is best. Well, we’ve ranked them for you, so here’s the best SSX games ranked from worst to best.

You’ve heard the saying “best of a bad bunch” before, but in this case, SSX Blur feels more like the worst of a good bunch. It’s not that the game is bad, more that it’s the product of its era.

Blur was a Wii exclusive title which launched in 2007. Considering the SSX series cut its teeth outside of the Wii, EA saw the opportunity to load SSX Blur with plenty of motion controls using the Wii remote and Nunchuk controllers.

Players would use the Nunchuk to control movement, speed and jump height, while players could perform tricks by moving the Wii remote in a variety of different directions. Uber Tricks, the series staple of flamboyant tricks, could even be pulled off by drawing shapes on the screen.

While SSX Blur isn’t necessarily a bad game, far from it in fact, it used a decent amount of assets from prior games SSX 3 and On Tour, and the motion controls made the game feel like a thrown together release for the Wii. Critics liked a lot of the ideas put forward by Blur, but they were hopeful for a sequel to build on those ideas that ultimately never came to pass.

The most recent SSX game, which is now approaching its tenth anniversary, SSX could have been a very different game had it stayed with its initial direction. Originally announced as SSX: Deadly Descents, the game appeared to utilise a more realistic and darker tone, which is everything that the SSX series is not. Thankfully, the final release managed to add some colour when it launched, though the Deadly Descents themselves remained.

Perhaps the only SSX game with any semblance of a proper story, the game sees classic characters like Elise and Mac, along with newcomers like Tane, form Team SSX to conquer 9 deadly, real life mountains. The only issue is they’re competing with utter dork Griff in order to do it first, leading to a global race to determine who the elite snowboarders are.

With the Deadly Descents being SSX 2012’s key gimmick, players are given different pieces of equipment designed to make snowboarding easier, from armour to protect against crashes to wingsuits for large gaps. It added an extra wrinkle to the game’s formula, and the enhanced online focus with geotags placed by other players aided in challenges and discovery, but the game failed to make an impact like the iterations before it.

Despite healthy review scores and decent sales, we haven’t seen another SSX game since.

After an almost flawless original trilogy of SSX games (which might have given away the latter half of this list), SSX On Tour felt like the series’ first misstep. Like any good snowboarding race, it was all downhill from here. This is relatively speaking though, as SSX On Tour is still an utterly wonderful snowboarding game, even if the UI and menus look like that weird kid at school’s notepad.

In a first for the SSX series, players were given the ability to create their own character to go out on The Tour, which let players explore a sprawling mountain range with plenty of routes and secrets to find. Players would compete in events or “Shreds”, which were bitesize challenges designed to offer fun distractions from the main competitions. Series legacy characters would pop up, but this was very much your journey, and you were free to customise yourself as you saw fit along the way.

If nothing else, SSX On Tour was also the first game in the series to offer skiing as a viable discipline, meaning players could experience going down a snowy mountain at 100 mph with their legs akimbo instead of strapped to one long piece of wood.

Like pretty much every SSX game in the series, On Tour was pretty well received by reviewers, but there was a bit of a downturn in opinion compared to previous games. Still, the main theme was Run To The Hills by Iron Maiden, so at least the soundtrack was top notch.

The game that started it all, and perhaps the forefather of EA Sports Big, the outlandish branch of the EA Sports publisher responsible for the likes of Def Jam Vendetta and the [insert X ball sport here] Street line of titles, SSX is undeniably one of the best games of all-time purely on the basis of what it would grow to inspire. In fact, looking back on the original SSX now, its beginnings certainly seem a lot more humble than they did at the time.

Helmed by Steven Rechtschaffner, a passionate snowboarder responsible for creating the sport of boardercross, which is now recognised as an Olympic sport, SSX was designed to combine the racing and freestyle tricks that snowboarding is known for. Players would pick from a selection of courses and choose either race or trick events. While tricks might sound useless during race events, doing so would earn boosts that allowed you to move faster, making them worthwhile even as you’re competing for that first place.

The groundwork was there for what SSX was set to become in later installments, but the only issue with the game was that there wasn’t as much identity (the cover art doesn’t exactly do the game favours, in all honesty), and there was a relatively paltry amount of content in comparison to other games in the series.

However, that didn’t stop the game from achieving nigh-on universal critical acclaim at launch, hailing SSX as one of, if not the best PS2 launch game.

For many players, SSX Tricky is the best SSX game ever made, and that’s completely understandable.

While the first SSX was good, there was still a lack of core identity that would come to define the series. Tricky was where that identity and personality took shape in a big way, as some absolute genius made the decision to couple the game with Run-DMC’s classic hip-hop anthem It’s Tricky, giving the game an easily assocatable hook that’s endured to this day. The SSX reboot in 2012 even called back to this with a remixed version of It’s Tricky, but it wasn’t as good.

As a game, SSX Tricky felt more like an expansion pack/updated version of the original SSX, similarly perhaps to the Champion Edition of Street Fighter V, as opposed to a full blown sequel. The game included all the tracks from the original game, along with 2 new ones, and introduced new features like a Rivalry system in World Circuit, which made certain players hostile to you. Oh, and also Uber tricks were introduced here, those gravity-defying acrobatic showcases that look cool and earn tonnes of points.

With more content to play with and unlock, Tricky was undoubtedly the definitive version of SSX (for the time being anyway), and the reviews showed that. Averaging at a 92 on Metacritic, earning the Must Play distinction in the process, Tricky is without question the high benchmark for what snowboarding games can accomplish, and the only game that’s managed to beat it is its sequel.

Again, maybe a controversial choice for some, but SSX 3 is the pinnacle of the SSX series and the entire genre as a whole, which is ironic because the whole game is about peaks. If you broke SSX 3 down on a content level, you’d probably find a similar amount on offer in Tricky, but while Tricky offers events on set tracks, SSX 3’s content comes together in a wonderfully seamless way.

Picking from one of several boarders, you find yourself on a mountain with 3 peaks, each offering steadily escalating challenges. Interestingly, players could progress through the peaks in whichever way they liked, as there were set objectives to complete like earning medals in the race or freestyle events, or by finding collectibles and completing challenges. Beating the race/freestyle requirements would unlock an event against your peak rival, and beating that would unlock the final challenge for that peak: a one shot run from the top of that peak to the bottom.

That was the true beauty in SSX 3; the fact that the 3 peak mountain was a fully explorable open world that linked the courses together in unique ways. Being able to drop at the top of a peak and freeride to the bottom through some of the various race courses along the way just felt extremely liberating. Seeing all of that come together at the game’s conclusion, where you’re challenged to ride from the top of Peak 3 all the way to the bottom of the entire mountain, is an unforgettable half hour endurance challenge that never gets old.

Given its vast improvements over SSX Tricky, it’s no surprise that SSX 3 is the best reviewed game in the entire series, earning a staggering 93 on Metacritic for its PS2 version and joining the ranks of the Metacritic Must-Play. It was even the first game in the series to hit 1 million copies sold, meaning that SSX 3’s legacy as the best SSX game is absolutely undeniable.

READ MORE: Ranking The Halo Games From Worst To Best