Ranking the Ghostbusters Movies from Worst to Best 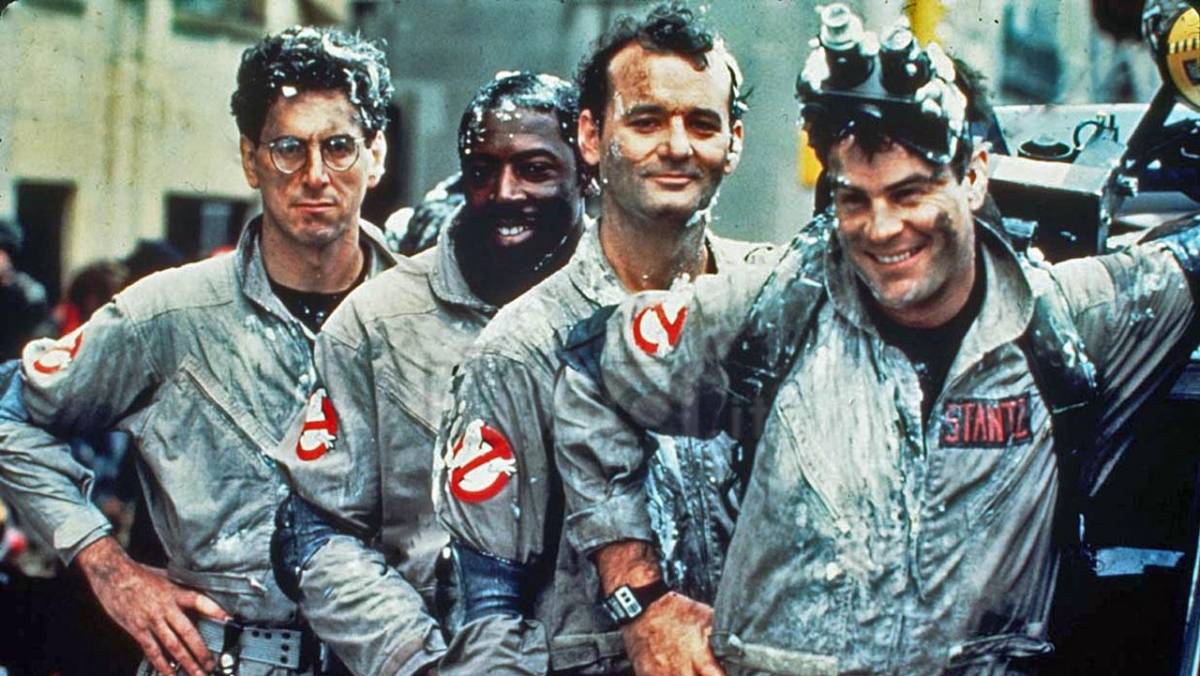 With the admirable success of Ghostbusters: Afterlife, many fans of the surprisingly enduring franchise feel as though the series is finally back on track. That remains to be seen, but the recent mix of nostalgia with a sincere effort to expand and move this universe forward proved to be just what many needed. While many seem to agree that the 1984 first film Ghostbusters remains the best, the success of Afterlife has renewed interest in the other films, as well.

Ranking the Ghostbusters movies from worst to best means asking things like whether or not the 2016 reboot Answer the Call was all that bad. Is Ghostbusters II as good as Afterlife, or was it the beginning of another example of a forced franchise with increasingly diminishing cinematic returns? While the 1984 film has inspired good comic books and cartoons, the sequels and reboots can feel like an uneven experience when taken as a whole and compared to one another.

So, before we get started: All four of the movies being ranked today are pretty good. None of them should be considered bad, and no one’s here to ruin the good feelings you got when you saw Afterlife in theaters. However, none of these movies really come close to the original’s charm and energy, and that’s something to keep in mind as we rank the Ghostbusters movies from worst to best.

Against all odds, including delayed releases and early concerns that the movie would be little more than a nostalgia-fest with a new coat of paint slapped on, Ghostbusters: Afterlife manages to be good enough. Some reviewers did call the movie a hollow, manipulative affair, but audiences have seemingly disagreed in overwhelming numbers. For many, this official third chapter’s story of Egon’s daughter inheriting more than just a farmhouse in the middle of nowhere hit all the right notes.

Directed and co-written (with Gil Kenan) by original director Ivan Reitman’s son Jason Reitman, himself a talented and successful filmmaker, Ghostbusters: Afterlife gave some an irresistible love letter to the franchise. It also introduced a range of young, would-be Ghostbusters, with Egon’s granddaughter (McKenna Grace) Phoebe providing one of the film’s better links between its history and probable future.

Unfortunately, while entertaining enough, and certainly well-intentioned in how it works the late Harold Ramis as Egon into the proceedings, Afterlife still feels incredibly messy. No one could find the perfect compromise between respecting the past and looking forward for a series with as passionate a following as Ghostbusters.

Reitman’s efforts here are admirable and sometimes quite well-done, and there’s a lot to enjoy in Afterlife. You can look at the likable kids in the cast, a nice visit with the original gang, and exceptional creature design work by Brynn Metheney. It just doesn’t amount to a very cohesive movie.

Everything taken as a whole comes across as a collection of references, ideas, and boilerplate modern blockbuster checklist requirements — this sequel should have been made 25+ years ago if it was going to be made at all. Afterlife is good, but pretty forgettable when it simply becomes a tool for keeping an IP going longer than perhaps it should.

As hard as the movie tries to set its new characters up for future adventures, it’s difficult to imagine audiences supporting something that relies on more than the opportunity to see familiar faces and hear a familiar soundtrack. When that shine wears off, Afterlife doesn’t have very much invested in its future.

2016’s Ghostbusters: Answer the Call (or simply known as Ghostbusters) might be one of the most controversial movies of the 2010s. While very far from perfect, the movie was seemingly doomed before it ever got to theaters. It received mixed reviews from critics, scathing reviews from many long-time fans, and a few positives from people who appreciated what the movie tried to accomplish.

The all-ladies-busting-ghosts reboot Ghostbusters: Answer the Call isn’t significantly better than Afterlife. Answer the Call had to do the reboot thing wholesale, starting fresh with new characters in a new universe. It tried to answer nostalgia in its own way, including a range of extended cameos by original Ghostbusters cast members. However, like everything else associated with the movie, this proved to be an extremely divisive element.

Using the same basic template as the 1984 original, Answer the Call sees four women coming together to create a team dedicated to handling a growing paranormal crisis in New York City. Answer the Call’s strength, and in a way that can remind you of the 1984 film better than any other on this list, is in the four principles.

Kristen Wiig, Melissa McCarthy, Leslie Jones, and Kate McKinnon work wonders with uninspiring characters. They have a chemistry in their interactions that keeps the movie rolling along, well past complaints about an overburdened story, a weak final act, or bouts of tonal confusion. Answer the Call has a lot of problems, but it also has more interesting new characters than the 2021 reboot, and when it’s funny, it’s as close to the original as you’re ever going to get.

Ghostbusters has iconic visuals and legendary creatures and effects, but they only run so far without good comedic actors playing off each other and whatever is going on around them. This is why the 1989 sequel is better than it has any right to be. It’s also the one thing Answer the Call does so well, and for that it deserves to be placed above Afterlife on this list.

While Columbia Pictures probably envisioned Ghostbusters as a solid comedy hit in 1984, no one imagined the almost immediate cultural impact the movie had. Ghostbusters became a life-defining moment for quite possibly millions of children, creating a franchise that continues to this day. This level of popularity was almost immediate, but it took five years for a sequel to come out — such a span of time seems unfathomable today.

Ghostbusters II didn’t do quite as well as the first one, and it’s not hard to see why in places. The story concerns Dana (Sigourney Weaver) becoming the target of a 16th century European tyrant and wizard known as Vigo. This and other events force the Ghostbusters to reunite, but it’s really all just a beat-for-beat revisit of the original. The only huge difference is that Ghostbusters II is considerably more family-friendly than its predecessor. Ghostbusters II’s script tries to compensate for familiarity by fitting as much into the movie as possible.

This approach actually does work, giving Ghostbusters II a certain quirkiness that doesn’t exist anywhere else. It also helps that everyone in Ghostbusters II, particularly Peter MacNicol as the servant of Vigo, is really quite fun. The special effects and general breeziness of this entire film makes it difficult to take serious fault with some of its more glaring shortcomings. When the movie you’re watching exudes a surprising amount of warmth from its cast (even Murray, who at times doesn’t seem to be really excited to be there), you’re more likely than not just going to relax.

Brilliant special effects, an underrated soundtrack, and some of the funniest dialog exchanges and quips to be found anywhere are also part of why Ghostbusters II has its admirers. The film was criticized in its time for being a shallow FX demonstration, even by fans of the first one, but those sentiments have largely subsided. The good points for Ghostbusters II far outweigh its negatives, but there’s no doubt this movie also benefits from sadly knowing we would never see this specific group of people together again.

There isn’t a lot to say about Ghostbusters at this point. The logo itself will probably be around long after humanity has faded from the memory of the universe. That’s a joke, but it really can be stunning to look at Ghostbusters and see how much bigger it’s become than just this one movie.

However, it all does come back to the original. Still considered the best in the series by most, none of the sequels have successfully hit the marks that made this one a hit across much of the world. From the dramatically different original idea by Dan Aykroyd, Ghostbusters became a whirlwind hit combining some of the hottest comedy stars in the world with clever special effects.

Its story of three paranormal researchers starting a ghost removal service in New York City, later joined by a fourth (the ever-great Ernie Hudson), played 80s cynicism against the Abbott and Costello Meet the Monsters series. It worked to perfection, with Bill Murray, Harold Ramis, and Dan Aykroyd in particular creating one of the best dynamics in the history of comedy film. While Ghostbusters has a solid premise, a good script with excellent pacing and legendary special effects, the human cast members are truly what makes this movie so special.

The interactions between these characters drive the film’s best surprises and most appealing moments. Without them, Ghostbusters would probably still be enjoyable, but it wouldn’t spawn an ongoing franchise. Watching Rick Moranis play off Sigourney Weaver, or Annie Potts as Janine angrily answering the phone, or Murray as Venkman squaring off against pretty much anyone who annoys him (including the sublimely antagonistic performance of William Atherton as EPA official Walter Peck) is a joy. These moments are made better by the soundtrack and the movie’s uniquely dark tone, but Ghostbusters simply wouldn’t exist as we love it were it not for the specific people involved. This is why the sequel is now seen by many as better than average, and also why the subsequent reboots have failed in ways that truly matter.

Not only is Ghostbusters extremely dependent upon its cast, but it’s also still the best of these movies to use the strongest creative qualities of each and every person involved. This elevates the film to more than just a classic 80s comedy-horror, but it dooms the other films to footsteps they probably shouldn’t be following to begin with. One might just be enough for this franchise.

Regardless of whether or not you agree with that, the “one” in this case is still a masterpiece.

READ NEXT: Ranking the Mad Max Movies from Worst to Best