The Phoenix Wright: Ace Attorney Trilogy polishes our favourite spiky-haired lawyer and makes the trilogy a lot nicer to look at, but thankfully doesn't try to fix what isn't broken. 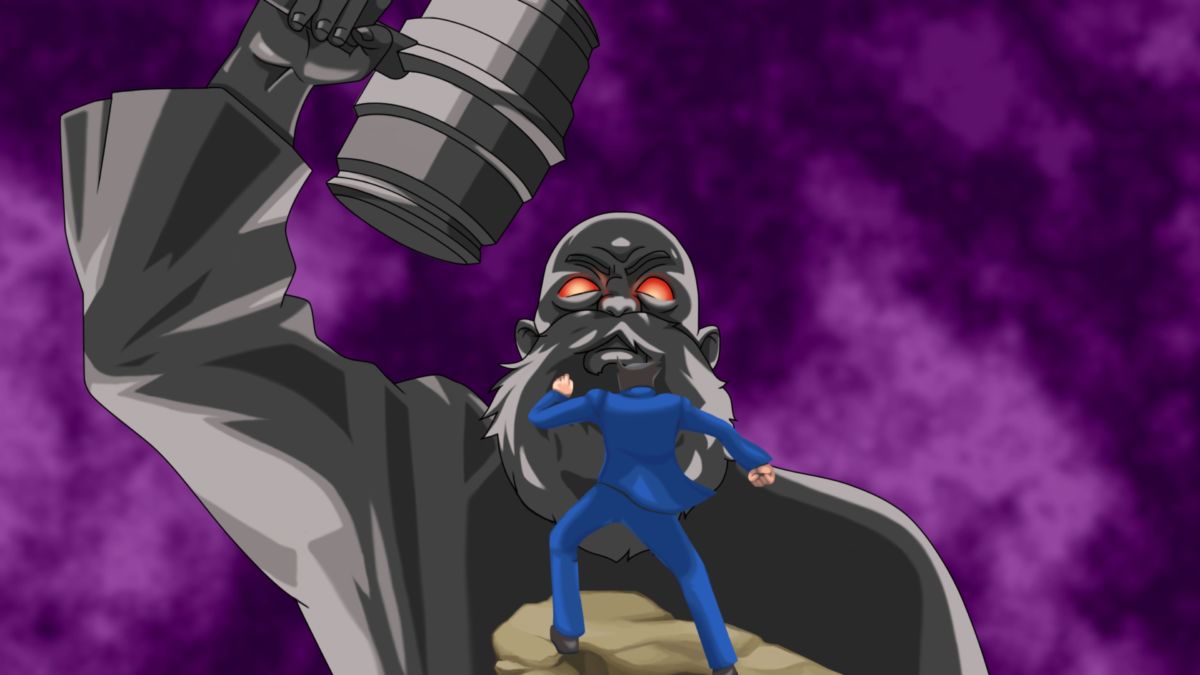 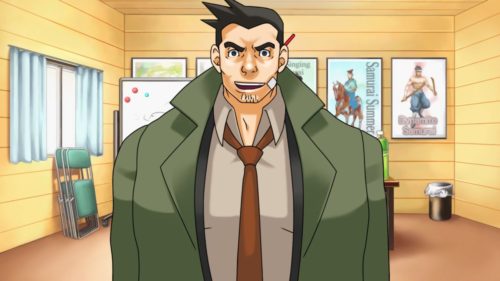 Put on your lawyer’s badge and spike up your hair because Phoenix Wright has arrived on PC, PlayStation 4, Xbox One, and the Nintendo Switch. This is the fifth release of the original Ace Attorney trilogy, as it moved from Game Boy Advance to Nintendo DS before hopping over to smartphones and then to the Nintendo 3DS, though the first international release was the DS version (the franchise first released exclusively in Japan). Now, the Ace Attorney trilogy is playable in high resolution with new hand-drawn sprites.

Before going into more detail about the games themselves, here’s everything you can say about the remaster: It’s good and clean. The hand-drawn sprites look great for essentially everyone except Manfred von Karma, the music is cleaner (though not especially different), and the gameplay runs incredibly smoothly. There are multiple save files and you can play the trilogy in any order you want to (although the first time you play through the game you have to play the cases inside the game in the correct order), as well as one or two QoL changes in the point-and-click gameplay to make sure you don’t end up randomly tapping everything. Just be careful to not overwrite your save file for one of the games with your save file from another game. 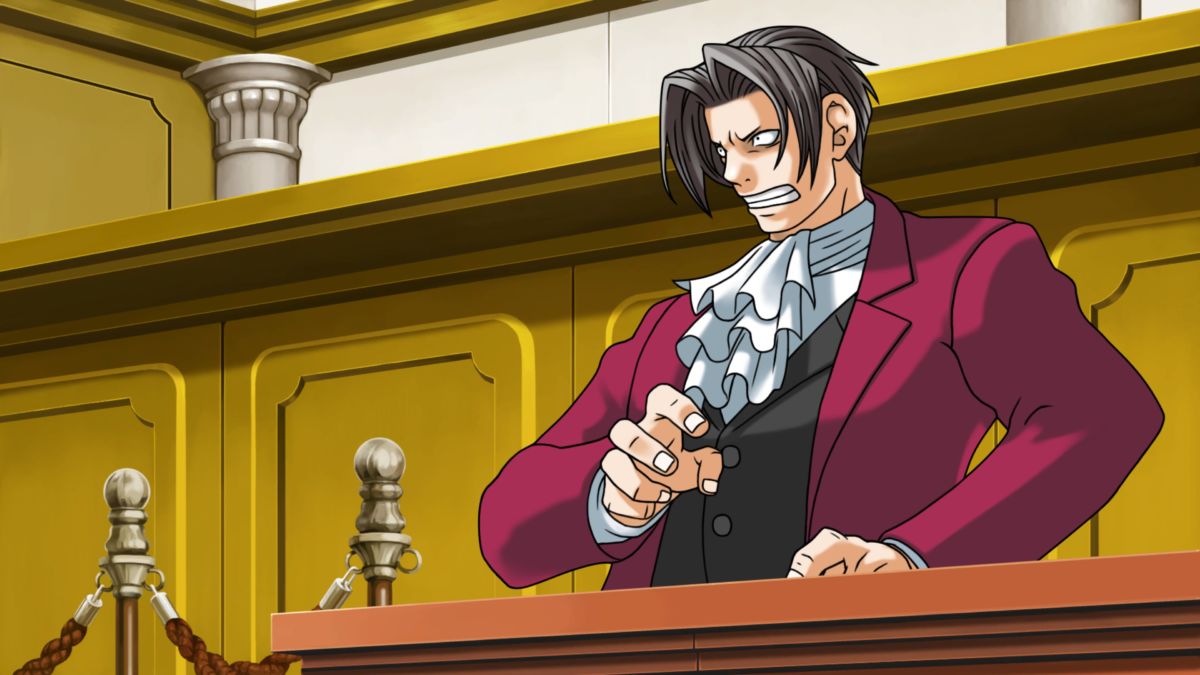 The gameplay is split into two halves, essentially. The first half is point-and-click standard fare, whereas the other half is somewhat like a visual novel, but with a lot more interaction than usual. To find out what really happened in each of the fourteen cases, you’ll need to talk to people, presenting evidence you’ve found to piece together the puzzle. After you’ve found all the evidence there is to find, and the witnesses and suspects you know about won’t spill any more details, it’s time to step into the courtroom and battle it out against a prosecutor.

In the second and third games, this first half gains a lot more depth as you are able to see so-called “psyche locks”, a visual representation of the mental barrier people put up when they are determined to keep the truth from ever coming to light. You can break these locks by presenting the right evidence, but you can also receive a hefty penalty from pushing too hard and then trying to use the wrong evidence. Although an empty penalty bar isn’t too annoying in the psyche lock sequences, you’ll have to watch out in the courtroom. 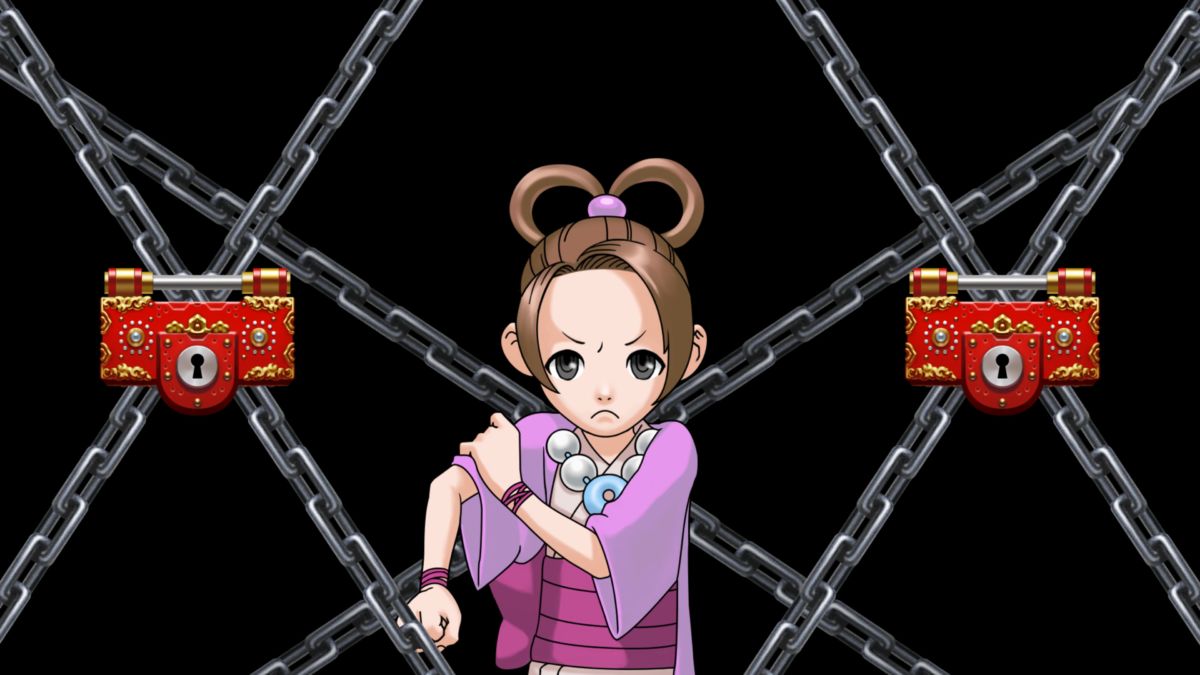 In the courtroom, you have to pick apart the witnesses’ and suspects’ testimonies to really get to the bottom of what happened. More often than not, it’s thinking outside the box that will lead you to the truth of what happened, because the murderers you’re looking for are very crafty individuals. Not only will you have to outwit the criminals, but you’ll also have to outwit the prosecutors. They are completely sure that the defendant is guilty and have prepared the case well.

Just because certain pieces of evidence have not been mentioned yet doesn’t mean that the prosecutor doesn’t know about them, so you have to stay on your toes. The other problem is that the Judge won’t take any nonsense. If you say something stupid or present evidence that doesn’t show a contradiction, you will have to pay the price with penalties. Too many and the case is over, the verdict: guilty. (Pro tip: if the penalty bar is almost empty, save as often as you can) 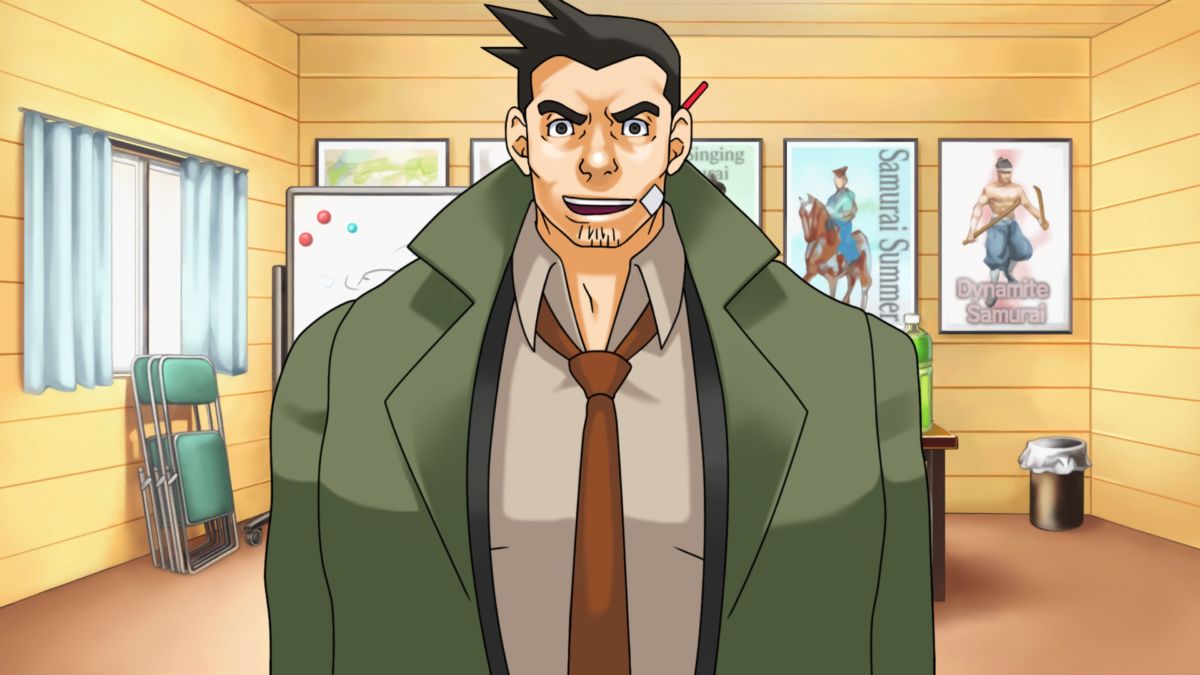 In most cases, the mystery doesn’t stop after a trial in the courtroom. You have to go back to the scene of the crime (and other places that may have been involved in the proceedings) and keep searching, using what you found out in the last trial as a way to find more evidence that may have been overlooked the first time. Often, this is the action really heats up, with certain witnesses having done a lot more than just seeing the crime — some people are willing to go far to protect the truth.

Going back into the franchise after not having played it for a while, it’s easy to forget just how well the Ace Attorney trilogy straddles the line between comedy and tragedy. Although the games do clearly take themselves seriously, they never fall into despair and hopelessness — in fact, a constant theme throughout the trilogy is never losing hope. At the end of the day, the games all have an uplifting tone, despite all the murder. 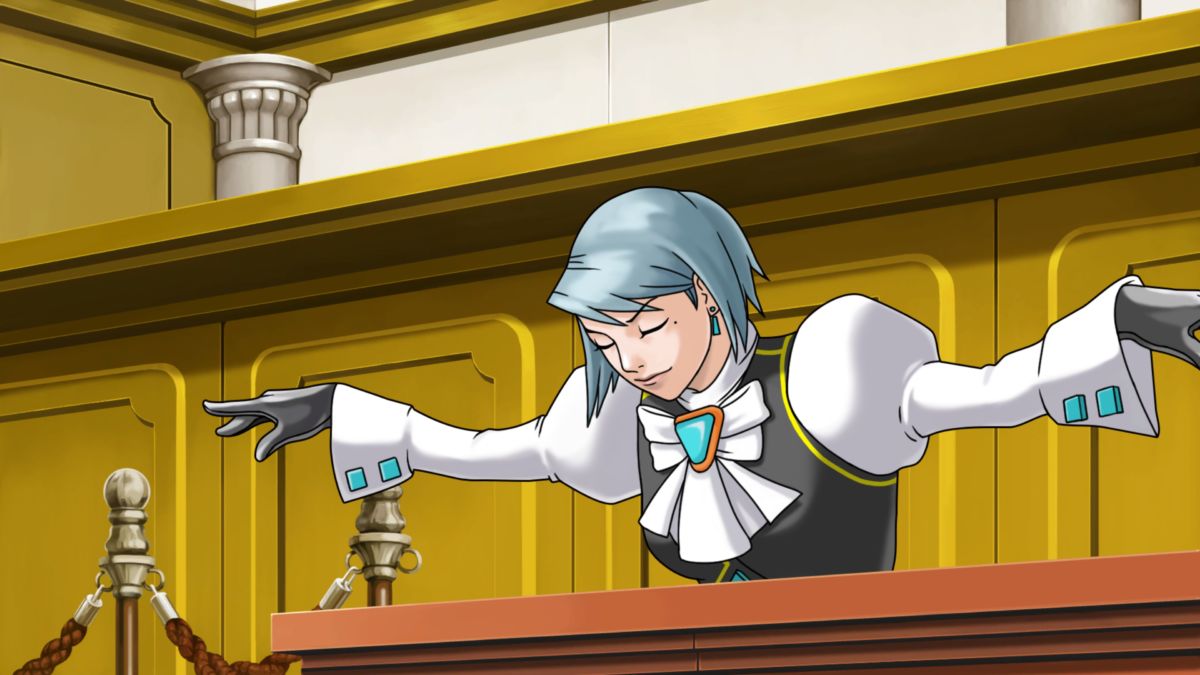 The characters often have exaggerated traits, but they never go so far that they feel like complete caricatures. Of course, they don’t always feel human, but by being just weird enough to fit into the world around them, they feel real. The way the characters are constructed — each completely different from the last — makes all the interrogation so much more fun. It’s never a chore to go searching testimony for errors because it’s enveloped in such an interesting world.

Each of the games in the Ace Attorney trilogy is thematically different from the others, sharing gameplay, structure, and often characters but taking a different direction with the story every time. Phoenix Wright: Ace Attorney is about corruption, whereas Justice For All poses the question about how far someone will go for the verdict they want and Trials and Tribulations is about impostors and imitation. 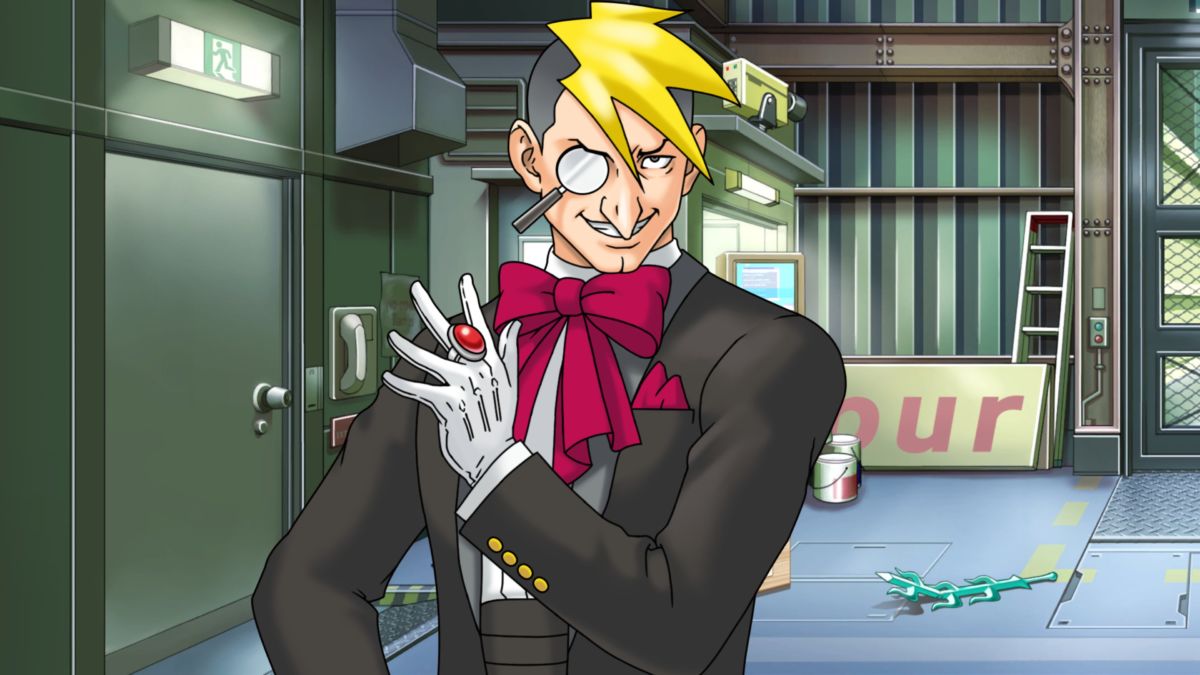 Although the first two games roughly abide by their themes, Trials and Tribulations strongly sticks to the theme throughout the whole game. It’s coincidentally also the game that’s the most narratively coherent — although all three games have a strong story, the case structure means that the story only focuses on the periods where there’s actually a murder to solve. In Trials and Tribulations, however, the game flows a lot more naturally, and it feels like there’s an overarching mystery going on (the feeling is created cleverly through the use of flashbacks).

Thanks to each game improving on the last in different ways, taking a different angle to give you a new experience in the Ace Attorney world, the trilogy as a whole is greater than the sum of its parts, with intricate details spanning entire decades. All of the characters are linked in a massive web of intrigue, backstories connecting to each other at the most unexpected of times. Although it’s noticeable throughout the games, it’s most visible towards the end of each game. All three entries in the franchise tie up everything nicely while still moving forward with an open ending, but none do it as well as the final case of the trilogy.

The Ace Attorney franchise has since continued, with three new main title and five spin-offs (only two of which ever reached the international market, sadly), and hopefully the Ace Attorney trilogy releasing on multiple platforms will give the developers inspiration for new games in the franchise (and if we’re lucky, maybe they’ll localize some more).

The Phoenix Wright: Ace Attorney Trilogy is an incredibly clean remaster of a trilogy of games with equal parts intrigue and humour, keeping a balance between the two at the toughest of times. With each game improving on the last one, the trilogy as a whole is an absolute delight and created with such an attention to detail that each play-through has you noticing more.

Verdict
The Phoenix Wright: Ace Attorney Trilogy is a polished version of an already almost perfect trilogy filled with more quirky characters and complex murder plots than you can fit in a courtroom.
9.5
Cultured Vultures is a pop culture website established in 2013 covering all things gaming, movies, and more. We eat your words.
All The News On The Biggest Games