Outriders: What Are World Tiers?

Tiers don't fall, they crash around me. 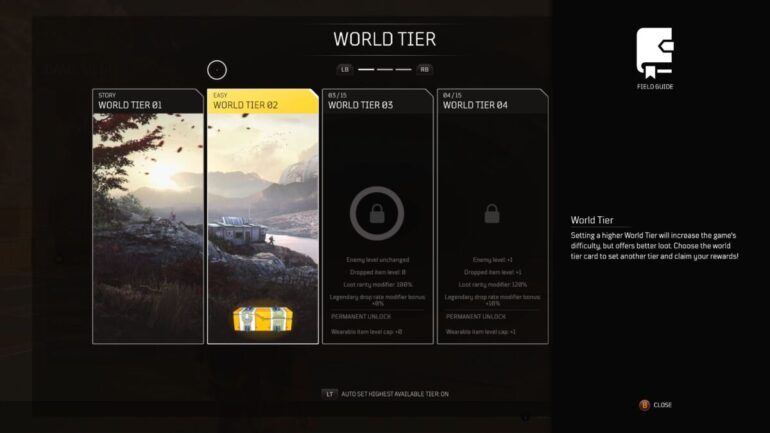 Like any self-respecting loot-based game, Outriders comes equipped with a World Tier system that allows players to adjust the difficulty of their game in key ways, allowing them to earn better loot in the process. However, the Tier system can be a bit confusing if you’re new to loot games, so here’s how it works.

World Tiers are what determines the game’s difficulty level, with 15 tiers in total (the first five are available during the beta). Players unlock new tiers by playing on the highest tier available and earning EXP, with players unlocking Tier 2 by the time the prologue ends. Killing enemies adds to the Tier EXP bar, but quests don’t. Once you’ve filled the bar, the next tier unlocks, but dying will set your progress back somewhat. If you prefer, you can toggle the option to automatically select the highest tier, and there are one time rewards for unlocking new tiers too.

For co-op players, you can play on your own highest World Tier as the Party Leader, but if another player is the Party Leader and has picked a Tier higher than you’ve unlocked, you’ll still earn EXP as if you were playing on your highest World Tier. The difficulty will adjust naturally when more players are in the party, so expect things to ramp up once you’ve got 3 players together.

Higher tiers will add additional levels to enemies. For example, World Tier 7 means you’ll face enemies that are four levels above you. However, you’ll also receive weapons and armour that’s four levels higher, and your wearable item level cap is increased by, you guessed it, four. Your loot rarity and legendary drop rates are also massively increased. Essentially, playing on higher World Tiers means harder enemies, but the rewards mean you’ll be stand up to your foes pretty quickly.

READ NEXT: 25 Best PS4 Multiplayer Games You Should Play