Home
Opinion
Why Randy Orton vs. Mick Foley Was So Important For WWE
Wrestling

Why Randy Orton vs. Mick Foley Was So Important For WWE 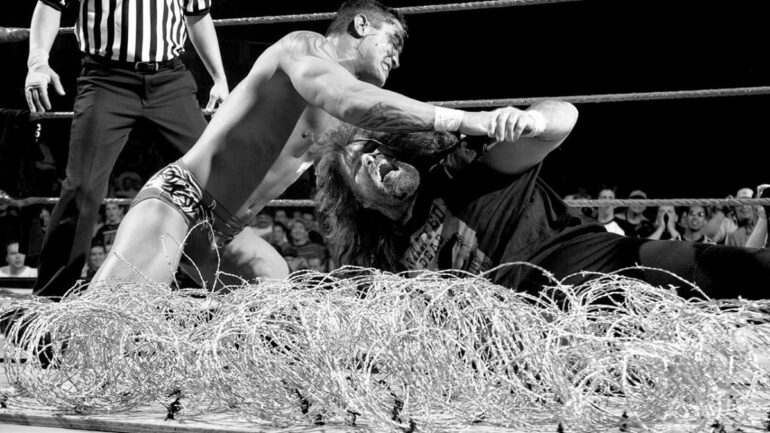 The Hardcore encounter between Mick Foley and then-Intercontinental Champion Randy Orton at Backlash 2004 has gone down as one of the most important matches of WWE’s Ruthless Aggression Era. Not only did it cement a future Hall of Famer in the young third-generation upstart, but it also gave ‘The Hardcore Legend’ one last hurrah as part of his iconic rivalry against Evolution’s Orton.

The match was built over the course of a half year, with Evolution attacking the veteran on numerous occasions as part of his ‘Legend Killer’ gimmick, before culminating on the Road to WrestleMania. Orton was on a tear in the 2004 Royal Rumble, entering at #2 alongside the eventual winner, Chris Benoit, lasting an impressive 30 minutes before coming face-to-face with his elder rival. Foley would replace Test, who was mysterious left unconscious after a backstage attack, storming the ring and laying out the youngster before finally eliminating him, and himself in the process.

Foley and Orton contiued to butt heads before colliding in a huge 2-on-3 Handicap match at WrestleMania 20, with the team of The Rock and Mick Foley taking on Evolution’s Randy Orton, Ric Flair and Batista. Despite the megastars involved, it wasn’t the most impressive end to their feud, so the blow-off had to be something truly remarkable, and boy did they nail it.

A no holds barred Hardcore match was booked for the following pay-per-view, an ode to Foley’s legendary brawls and violent affairs in ECW and his days in Japan as Cactus Jack. Foley even adorned his old ‘Wanted’ garb for the match, bringing with him a slew of weapons to help inflict pain on his bitter enemy.

For Orton, this was very much a make or break scenario, his biggest and most hotly anticipated singles matches to date where the fans expected him to buckle under the pressure of competing in a match that he wasn’t used to. His Intercontinental title run was getting him over as an arrogant heel in need of a good comeuppance, but also put him on the precipice of becoming the main event star he’d later become. This match needed to do both, proving him to be a reliable hand in big match situations and that he could manage these longer narratives.

The match featured all sorts of crazy moments, some of which were very unlike WWE, who at the time were doing their best to distance themselves from the hardcore style, aside from the occasional crimson mask. Most of the spots in this match need to be seen to be believed, including moments when Foley dropped an elbow off the stage and had to be talked down from brutalising Orton with a flaming barbed wire bat by Eric Bischoff. Orton also gave as good as he got throughout, getting into the spirit of a hardcore match and blading himself silly, using a range of weapons to punish the veteran brawler.

The concluding chapter of the Foley/Orton saga achieved everything it set out to and then some, making it a timeless classic as well as one of the greatest matches in Backlash history. Not only did it steal the show that night in Calgary, but it also established Randy as a future World Champion, an accomplishment that he would add to his resume only a few months later at SummerSlam. The match brought back an intensity long missing from WWE programming, which helped reinvigorate fans that were slowly falling out of love with the product as it drifted further towards a less mature audience.

Mick Foley’s swansong did so much for the business without us even realising at the time, allowing the Cactus Jack character one last hardcore masterpiece before being retired into the annals of history. It’s a shame that this wasn’t Foley’s final performance overall, and he’d be reduced to a horrible run as TNA World Champion in the late 2000s into 2010s. Regardless, this is something that he could be proud of, giving fans (including myself) one last taste of the gory battles between he, Terry Funk and Abdullah the Butcher, as well as putting over a star for the ages in a huge way.

Whichever way you look at this match, it’s a masterclass in professional wrestling, both in terms of performance, style and booking. Watching this back in preparation for this article made me fall in love with that era all over again, so if you’re ever in need of a brief reminder of how good WWE can be when hitting its stride, head on back to Backlash 2004 and relive Foley vs. Orton.

READ NEXT: What’s Next For NXT UK And WALTER?