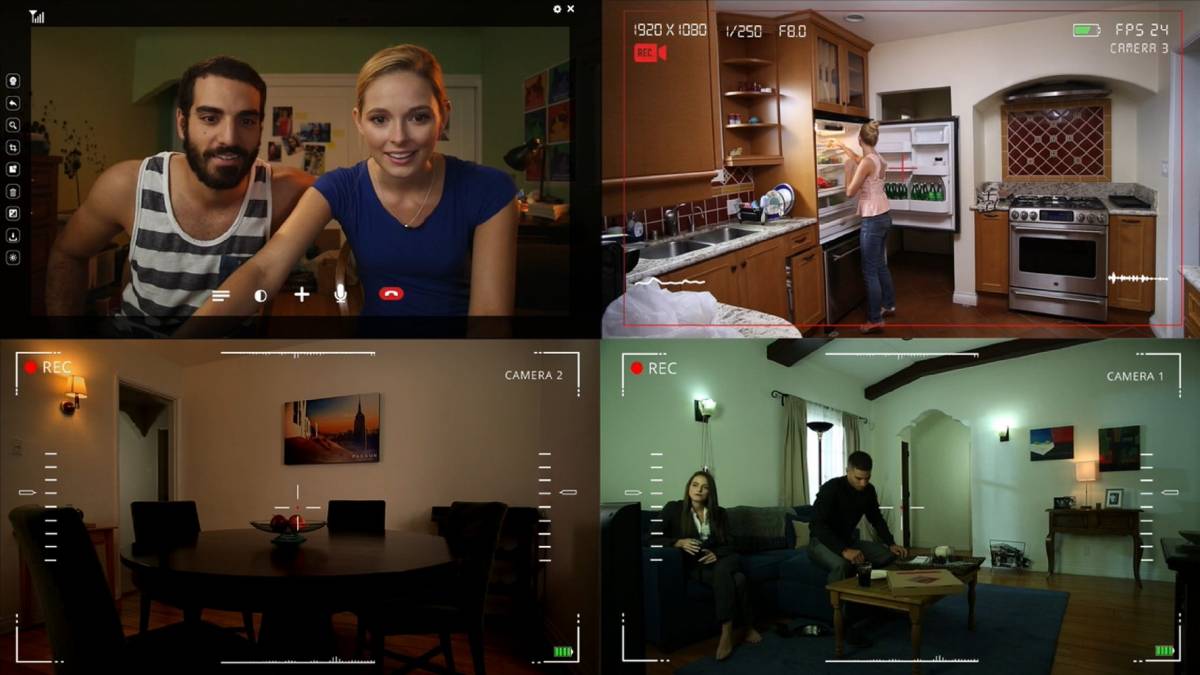 Filmmaker Annie Curtis (Briana White) is making a new documentary film about cutting processed foods out of her diet. Sort of a reverse Supersize Me. Her husband, Neil (Michael Pugliese), participates in her experiment, because, why not, he’s a good husband and that’s what good husbands do. So Annie puts cameras all over the house (except for the bedroom, because, you know, that’s where the magic happens) to catch everything as it happens. But things go awry when Annie’s cameras show strange people in their house. Well, not their house per se. Instead, it’s a version of their house in another dimension and the people they’re watching are alternate versions of themselves in that same parallel dimension.

This is the basic setup for Occupants, a just-released low budget science fiction/horror film written by Julia Camara and directed by Russ Emanuel. Certainly, one would think that it would be very difficult to put an original spin on the found-footage film genre, something that seems quite worn out by now. But this one is quite nice. The basic meta-narrative is that we’re watching an informational video put out by the Peterson Research Institute, a paranormal investigation group founded and run by Dr. Alan Peterson (Star Trek: Voyager’s Robert Picardo).

I guess I like the setup because, while, sure, all found-footage films are somewhat a critique of the movie watching experience itself, Occupants concerns itself directly with the ethics of voyeurism. The movie asks us to think about what we get out of watching other people in unguarded moments, even if those people are fictions, creations that we project onto a screen for our amusement.

And that’s not the only ethical question the movie raises. After Annie discovers that her camera is picking up alternative-dimension versions of herself and her husband, her first idea is to keep the cameras rolling and assemble a different kind of documentary from the footage. But, interdimensional cameras or not, real people are being spied on without their consent. As intelligent as they clearly are, these questions don’t even occur to Annie and her husband until some major inter-dimensional lines are crossed.

Like a Star Trek mirror-universe episode, the alternative universe versions of Annie and Neil have a darker disposition. Maybe they’re even evil. When alt-Neil commits a terrible act of betrayal, Annie decides to tell her alternate-universe self what’s going on in the form of a note that she sends through a small interdimensional portal that’s opened up in the living room. (Yes, I know this sounds absurd, but it actually makes complete sense in the world of this movie.) It’s a big enough portal to send small objects through. The news of her husband’s betrayal pisses off alt-Annie. She’s angry as hell at her husband, sure, but she’s also very angry at her other-dimensional counterpart for interfering in their lives and spying on them. And, well, she should be pissed. Her privacy is being violated. Her response to that violation — terrorizing her other-dimensional counterpart and torturing alt-Neil — is inappropriate, to say the least.

And thus begins the horror portion of this sci-fi/horror hybrid film. Actually, the marketing for this movie is kinda cheeky-sneaky. The poster clearly looks like the movie is going to be unambiguously horror. Dark colors. What looks like a ghost emerging from a mirror. The description, at least the one posted on Amazon, finally gives you the impression that the movie is going to be marginally sci-fi. But it’s mostly a science fiction movie with some horror elements. I know you’ve got to do whatever you can to get people to watch your stuff, and low-budget horror has a built-in audience, but hopefully the science fiction community will get behind this film too.

The acting is pretty not bad. Sort of B-movie-ish. Which is fine, but a found footage film loses a bit of verisimilitude when the acting doesn’t feel totally realistic. Interestingly, Briana White is somewhat better as her “evil” version and Michael Pugliese is better as the “good” version. Or at least they’re more believable in these roles. Hell of an effort from both of them, though. It’s a tough thing to have to play two completely different characters convincingly in the same movie.

Occupants is a neat sci-fi horror movie that really kept me riveted once we got into the meat of the story. I was quite surprised at how original the flick was, considering the glut of found-footage horror films out there. Occupants cleverly answers one of the biggest questions of the genre: Who the hell is assembling all this footage? It also asks some riveting questions about privacy, voyeurism, ethics in journalism and what makes us individuals, especially if there are multiple versions of ourselves wandering around in infinite universes. Quite heady stuff, sure, but quite fun, too.