The History of the NXT United Kingdom Championship 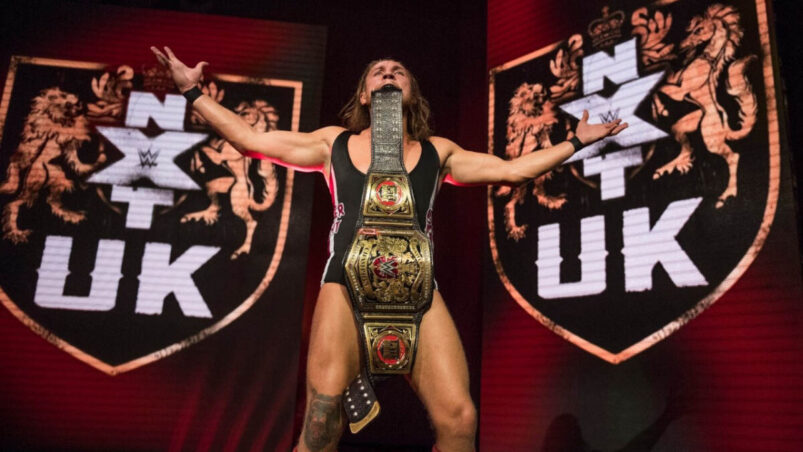 At World’s Collide 2022, the NXT UK Championship and the NXT Championship will be unified, with Tyler Bate and Bron Breakker defending their respective titles. This will be the official end of the NXT UK Championship, before the unveiling of NXT Europe and a new replacement. During its lifespan, the title was held by four individuals across five different title reigns, with two of those reigns lasting over a year.

Without an official branded show to appear on, Bate successfully defended the title four times during his inaugural 125-day title reign on a variety of shows. Bate’s first title defence occurred about a month later on the February 11th, 2017 edition of WWE NXT in a match against his mentor Trent Seven, and a second title defence at PROGRESS Orlando taking on Mark Andrews. A successful title defence against ‘Gentleman’ Jack Gallagher on the April 26th, 2017 episode of WWE NXT and a main event performance against Mark Andrews on the WWE United Kingdom Championship Special continued to establish the championship as a workhorse title. At 125 days and four title defences, Bate averaged a match every 31.25 days.

To the surprise of many, the 2017 iteration of NXT TakeOver: Chicago saw Pete Dunne defeating Bate in a rematch to become the second WWE United Kingdom Champion. Over the next 685 days, Dunne became the figurehead of the NXT UK brand, which debuted its own show on October 17th, 2018 while Dunne regularly featured on NXT television and events. Prior to the unveiling of the NXT UK show, Dunne varied his title defences by mostly featuring in matches in NXT (Wolfgang on September 13th, 2017, Johnny Gargano on November 22nd, 2017, an awesome rematch with Bate on December 20th, 2017, Roderick Strong on February 14th, 2018, Adam Cole on March 14th, 2018, and another excellent match with Kyle O’Reilly on June 13th, 2018). However, Dunne also made title defences on independent appearances (a Fatal Four-Way match at ICW Shug’s Hoose Party against BT Gunn, Trent Seven and Wolfgang, an appearance at PROGRESS Chapter 60 facing Jack Gallagher, a defence against Joseph Connors at PROGRESS Chapter 61, Zack Gibson at FutureShock Underground #25, and Markus Burke on the April 26th 2018 edition of UCW).

In the build-up to the roll-out of an NXT UK weekly show, the WWE United Kingdom Championship Tournament 2018 had Noam Dar become #1 contender and saw a hard earned Dunne defence against Zack Gibson. The October 17th, 2018 debut of NXT UK featured Dunne defeating Dar, and four weeks later a successful defence against Danny Burch, as well as an appearance against Morgan Webster on Night 5 of the PROGRESS Coast To Coast Tour. Zack Gibson had a second unsuccessful opportunity on August 22nd, 2018 against Dunne on an episode of WWE NXT, and four weeks later a No Contest against North American Champion Ricochet. Dunne’s final defence on television occurred on the November 28th, 2018 edition of WWE NXT UK, defeating Jordan Devlin in a great match. The first ever NXT UK TakeOver: Blackpool was headlined by Dunne tapping out the head of Gallus, Joe Coffey, before the sudden debut of his next challenger, WALTER. With nineteen title defences over 685 days, Dunne averaged a match every 36 days, and helped transition the title onto its own brand.

Despite expectations, the title match between Dunne and WALTER occurred not on an NXT UK TakeOver, but instead NXT TakeOver: New York, where Pete Dunne’s reign finally ended at the hands of WALTER. An undisputed classic; this allowed Dunne to eventually move full time to the US brand, and WALTER to become the new leader of the NXT UK brand. As the third champion and the first to hold the title when rebranded as the NXT United Kingdom Championship, WALTER held the title for the longest at 870 days, the lengthiest WWE title reign since 1988. Unfortunately, this reign also coincided with the worldwide COVID-19 pandemic and several months of lockdown, impacting upon the regularity of title defences. The year 2019 saw him defend the title three times, in a rematch against Dunne on the May 22nd edition of NXT UK, Travis Banks on June 26th, and an incredible battle with Tyler Bate at NXT UK TakeOver: Cardiff.

With WALTER entering 2020 by defeating Joe Coffey at what eventually became the last NXT UK TakeOver, Blackpool II, and Dave Mastiff on the March 5th episode of NXT UK, the show returned several months later, with WALTER in a brutal fight against Ilja Dragunov in a Match of the Year contender. Seemingly determined to make up for lost time, WALTER had several more excellent matches in a row, defeating A-Kid on the January 14th, 2021 episode of NXT UK, Tommaso Ciampa on Night 1 of NXT TakeOver: Stand & Deliver, and the April 8th episode of NXT UK against Rampage Brown. As the longest reigning champion at 870 days but with only nine title defences, WALTER averaged a defence every 96.66 days.

At NXT TakeOver: 36, WALTER was finally felled in another instant classic by Ilja Dragunov. As only the fourth champion in the history of the title, Ilja eventually became the first to have to vacate the championship at 346 days. During his reign, Ilja became the only champion to defend solely on NXT UK episodes, against A-Kid on October 14th, 2021, Rampage Brown on December 2nd, Jordan Devlin on January 27th, 2022, Nathan Frazer on March 3rd, Roderick Strong on April 7th, a rematch against Devlin on May 12th, and finally Wolfgang on July 28th. Officially, Dragunov had to vacate the title on the August 4th episode of NXT UK, but despite having to vacate the championship, Ilja defended it seven times over 346 days, averaging a title defence every 49 days.

After vacating the championship, a tournament began, and the final was to occur on September 1st. However, Tyler Bate appeared on the August 16th episode of NXT holding the NXT UK Championship, making him the first and last holder of the title, as well as the only champion to hold it more than once. His final reign will technically consist of four days, winning it on September 1st and unifying it on September 4th at World’s Collide. Regardless of whether he wins or loses, Bate may be the perfect choice as the final holder, having been a part of the NXT UK brand since day one and an integral part of the history of the championship. If anything, it’s mildly disappointing that just as the brand seemed to be bouncing back from the pandemic, lockdown and Speaking Out, NXT UK seems to be getting killed off with a whimper, not a bang.