Nintendo’s cartoony sports sim returns, with some welcome additions and some growing pains. 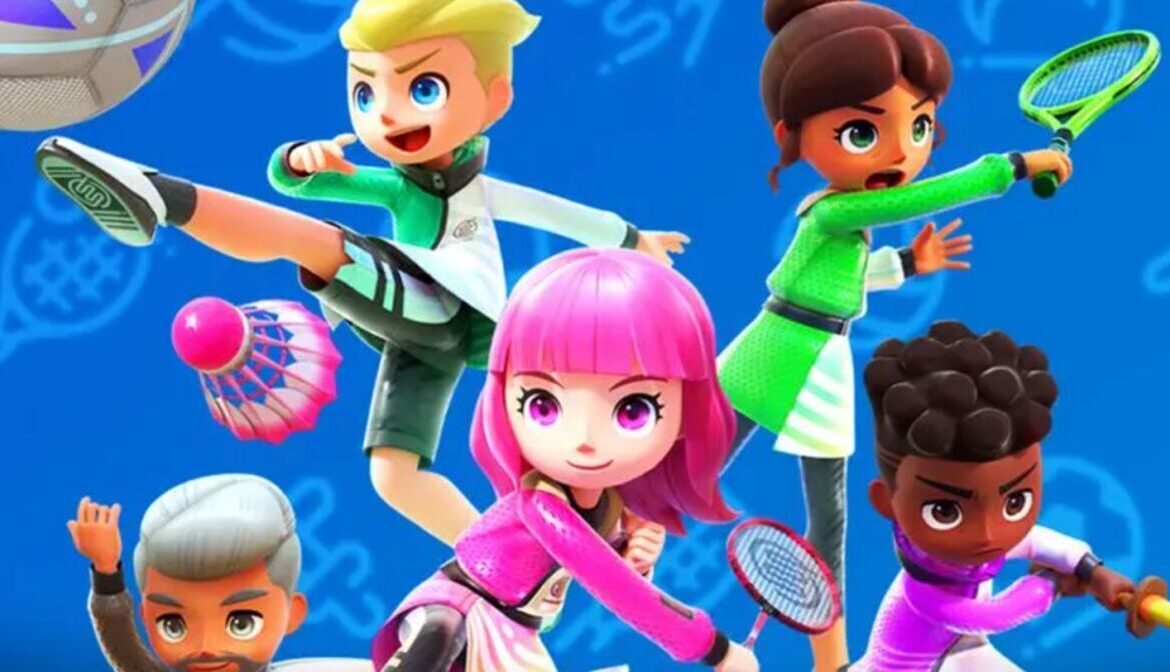 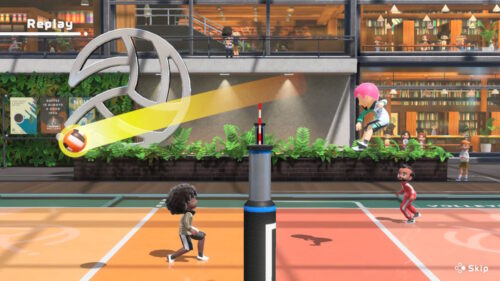 It’s time to put down that iPod playing Gnarls Barkley’s ‘Crazy,’ pause that DVD of the Silent Hill movie, and roll up your capri pants before logging into the brand new website twitter.com, because with the release of Nintendo Switch Sports, we’re partying like it’s 2006 again.

Sixteen years might have passed, and we may not be as spry as we used to be, but the Nintendo nostalgia machine won’t let that stop them, and neither should you. But how have the technological leaps of the past 1.6 decades expanded the world of virtual, motion-controlled sport?

Whereas the original Wii Sports was essentially a tech demo to show off the original Wii’s motion controls, and Wii Sports Resort was a demonstration of the added sensitivity of the Wii Motion Plus peripheral, Switch Sports arrives five years into the Nintendo Switch’s lifespan, with no new peripherals or motion technology to show off. Switch Sports is here, it seems, for no other reason than the love of the game.

At launch, Switch Sports has six available sports to play: volleyball, tennis, badminton, bowling, football (or soccer for the Americans), and chambara (swordplay, as previously seen in Wii Sports Resort). Golf is slated for an additional update later this year, but the six sports already here each have their own quirks and charms. The glaring omission of the other highlights from the original Wii Sports, like baseball and boxing, does feel strange. Soccer, like boxing probably would, requires each player to use two joy-cons at once, but as it stands we’ll have to carry on without these old faves.

The three completely new sports, volleyball, soccer, and badminton, all slot in with the familiar sports easily. Badminton differs from Tennis in its much smaller field of play, 1-v-1 matches, and quicker response time. It still does have a lot in common with tennis, but the sport’s overall similarity with tennis (which has to be played doubles, with a duplicate of yourself if you don’t have enough players) does make badminton feel like a slot that could have been given to another different offering.

Volleyball is my personal favorite of the new offerings. Also played in 2-v-2 matches, Switch Sports’ volleyball constantly has you juggling the basic moves of volleyball: bump, set, spike, and block, depending on your positioning and the moves of your teammate. Volleys can last a long time, and the back-and-forth between both teams against each other, and each team amongst themselves, is always active and exciting.

Football is by far the most complex and involved of the sports on offer. Unlike the other sports that will mostly move you where you need to be so long as you react in time, in football you have to manually move your avatar around the field, jockeying for control of the oversized ball. The motion controls give you multiple angles and modes of kicking, as well as buttons for dashing forward (with a limited stamina bar) or passing the ball to your closest teammate.

Some sports also have additional challenge modes, like an obstacle-course like gauntlet for bowling, and a side mode in football called Shoot-Out, where you can use the Leg Strap previously included in Ring Fit Adventure to simulate taking free shots at a goal. A later update will allow you to use the leg strap in the football mode proper, but for now shoot-out is the only mode that requires the Leg Strap.

Beyond the return of motion-controlled sports mini games, Switch Sports also resurrects the immaculate aesthetic of Wii Sports and Wii Sports Resort. The whole game takes place on an island sporting paradise called Spocco Square, where each main sport has its own bespoke amphitheater. These areas are full of striking detail that make them feel lived-in and vibrant, from the lush tennis courts to the sterling indoor volleyball court, with a glass ceiling spilling sunlight down and a bookstore/coffee shop visible in the back that I would pay inordinate real world money to be able to visit.

Most thrilling of all, for me at least, is the fact that Wii Sports music is back, baby. The joyful lilting piano of the original Wii Sports theme are resuscitated here in a fun new arrangement, and each sport has its own theme that’s like a drink of crisp, cool water on a hot day. The ethereal, almost vaporwave energy of the volleyball theme, the chambara theme’s vague gestures at samurai movie scores, and bowling’s jazzy tune all make the idle moments lively and the frenetic moments bearable. While Wii Sports composer Kazumi Totaka didn’t return for this game, composers Haruko Torii and Takuhiro Honda have excelled at creating new compositions that feel just as bright and exciting as the old games, if not moreso.

Sadly, not everything we knew and loved has made it back for this reunion tour. For one, Nintendo’s quiet disinheritance of their Mii mascots continues, as Switch Sports tries to supplant everyone’s favorite goofy avatars with more expressive Sportsmate avatars. You can still change your face to a Mii you have on your Switch, but doing so locks you out of most cosmetic items. There are also no longer Miis spectating you when you play, and the generic Sportsmates who watch you lack the same silly charm.

Perhaps most egregious of all, when you throw the bowling ball behind you in Switch Sports, there aren’t any Miis to freak out and jump around. The Sportsmates don’t even respond. Nothing happens. It’s almost enough for me to give this game a 1/10, but we have to rise above nostalgia sometimes. Still, the absence of these idiosyncratic touches does make Switch Sports feel a little like it’s playing it safe.

Your Sportsmate avatars have some rudimentary customization options at the start, with only six total hairstyles at the start. You can unlock additional clothing, accessories, eye colors and hairstyles through playing online, though there’s a limited selection at any given time and you’ll likely clear the starting crop of cosmetics quickly. You also only gain points to put towards new pieces by playing online – local multiplayer doesn’t net you any experience or new swag.

While the world of Spocco Square is immaculate and charming, the menus and layouts of Switch Sports are relatively sparse. When you play any sport single player, you no longer have an experience level that increases or decreases, and you no longer have any sense of progression beyond your own sense of improvement. Scoring in local multiplayer and online multiplayer is often different – for example, playing tennis with a friend in the same location is scored like a real tennis match (first score is 15, then 30, then 40, etc. over a few sets), but online it’s always just first to 7. These streamlining factors are likely meant to keep online games going so no one’s stuck in one game for too long, but they’re strange compromises of the very sports we bought the game to play in the first place.

On the topic of online play and multiplayer in Switch Sports, there are some issues of connectivity. I never had to wait very long for matchmaking, and Switch Sports lets you pick multiple games at once and see which sport gets more players (the answer is usually bowling, in my experience). That said, I’ve had some matches get dropped out of nowhere and some laggy responses from myself and my fellow players. Playing with friends is fairly easy in comparison.

Switch Sports also requires that you connect your Switch to the TV for most multiplayer modes, crushing hope for easily setting up a group game session in a public place. And while Switch Sports is technically playable on a Switch Lite, given you have other joy cons to pair with it, these hurdles can cause a lot of headaches to clear. The reality of the Switch being a portable console never squares with Switch Sports’ desire to be a multiplayer-centric game, and the friction between these two ideas feels like something Nintendo has elected to just ignore and hope you don’t notice.

And yet, despite all of these shortcomings, the lack of features, dearth of player customization, and bizarre design priorities, Switch Sports has such strong fundamentals and such a fun gaggle of games that it makes its failures hard to remember while you’re in the thick of it. It’s just really fun to swing the Joy-Con around (with the wrist strap to protect your tv from getting shattered, of course) and play some virtual tennis. My girlfriend and I have been sinking hours into it every day without realizing where the time has gone. We were frustrated when she had to sign in with her own Nintendo Online account just to be able to play online multiplayer and get her prizes, but we did it anyway and afterward we had a blast pantomiming virtual volleyball.

This makes Nintendo Switch Sports an exceedingly difficult game to assign a specific score. It is clearly imperfect and underdeveloped in spots, and it is also an absolute blast. After a play session I can weigh its shortcomings clearly, but when I’m playing it these concerns all melt away. Time will tell if Nintendo will continue to expand and support Switch Sports, or if they’ll just staple on golf in a few months and call it a day. But for now, the opportunity to play around a bit with friends and strangers is enough. 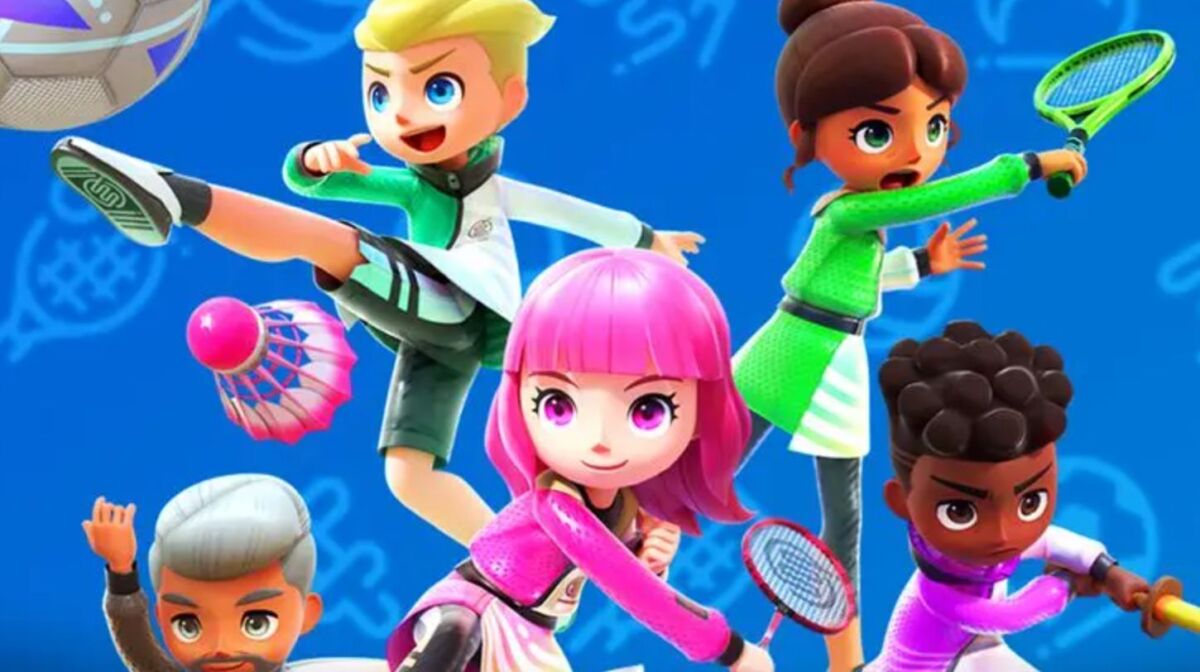 Verdict
While some new aspects feel undercooked and the online multiplayer’s reward economy feels imbalanced, Nintendo Switch Sports still has that undeniable charm and endless replayability that we remember.
7.5
Buy on Amazon
Cultured Vultures is a pop culture website established in 2013 covering all things gaming, movies, and more. We eat your words.
All The News On The Biggest Games