How A Nightmare On Elm Street Ruined Me 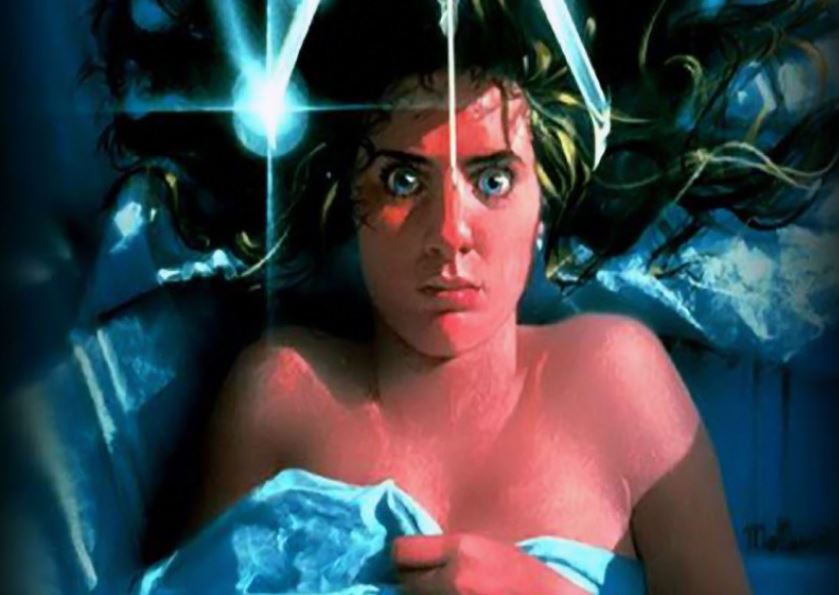 Contains spoilers, but if you like horror movies and haven’t already seen it then what the fudge is wrong with you?

Growing up, there were two movies which tattooed sheer naked terror onto my formative, squidgy little brain. One of them was Jaws, which I saw when I was very young and affected me so badly I couldn’t even get in a bath which had more than a few inches of water, lest Bruce materialise out of nowhere and gobble me up. The other was A Nightmare On Elm Street, a movie which shook me up so badly that it left me with PTSD.

I would have been eight or nine years old when I first watched it. I was staying with cousins in Ireland on a family holiday. They got the movie out on VHS from the local fleapit video library one night in the mid-1980s and we sat down to watch it, very late at night, like idiots.

I knew something was very badly wrong within the film’s opening moments, as an eerily silent New Line Cinema logo flashes onscreen in murderous red before we cut to the sinister frame-within-a-frame footage of some nasty fucker breathing heavy while making some sort of ultra-stabby glove. Who makes a glove that stabs people?!? I was both horrified and compelled. I had to find out more.

(The sensible thing at this point would have been to scamper off to bed but, foolishly, I was determined to show my older cousins what a badass I was. This decision would cost me dearly).

Things only got worse, as poor Amanda Wyss is chased round some industrial shithole (complete with its very own random sheep) by Mr Stabby-Hand. Amanda (or Tina as she is known in the film) wakes up and tries to drift back off, clutching her trusty crucifix to fend off the bad juju. I was raised Catholic -no longer practicing FYI- and was still at an age where I would have done something similar. As we later discover, no amount of Jesus can save Tina from a horribly violent death as she is flung about her bedroom, like a sock in a tumble dryer, by an unseen force. A crucifix was useless, this film was telling me. Ergo, there is no God. My world was coming down around my tiny ears.

This movie presented me with a shopping list of everything I would never want to happen to me, ever: strangled by my own bedsheets? Check. Eaten by my own bed and then puked back up in a vomitous geyser of blood? Yup. Getting tossed around and murdered to fuckery by an invisible murdery man? Oh yes. But the one moment which really messed me up was the bit when Nancy takes a bath only to get actually pulled under the water. Why on earth did the silly girl decide to tempt fate by singing The Freddy Song beforehand? (Also she rejects her mum’s offer of a glass of warm milk on the grounds that it’s “gross”, which it is).

Of all the ways I did not want to die, drowning held the top spot. I’d had enough trouble rehabilitating myself after Jaws, and now I had to deal with this shit? It was awful. Nancy escapes, but not without lots of helpless flailing, a cackling Freddy Krueger and pounding 80s horror cardio music (“dundundundundundundundundundun”). Furthermore, when she (or the stunt actress) gets pulled under she appears to be completely naked, yet another arrow shot straight into the bullseye of my childhood innocence, ending it forever.

I very clearly remember watching the moment when Nancy attempts to flee Freddy and his murder glove and legs it down the stairs, only for them to turn to marshmallow beneath her feet, thereby ruining any chances of escape. I’ve had nightmares about such a thing, as I’m sure many of us have. That this film seemed to have a window into my brain and was able to bring my darkest fears to life was simply ruinous.

I had a brief moment of catharsis when Nancy stands up to mean old Freddy and announces that she doesn’t believe in him anymore, at which point he evaporates in a puff of smoke or glitter or whatever it is he’s supposed to turn into. But then at the end we find out he’s not dead at all and has turned into a car (kinda). He ups the ante by murdering Nancy’s mum while her daughter is driven off banging on the car windows like that really upsetting bit in Nocturnal Animals.

The film ended but by that point it was too late; the trauma bomb had been dropped and we were all ruined. For years afterwards -and I mean years – I couldn’t even look at a picture of Freddy Krueger without all-but-physically shitting myself. I could barely watch horror films. When A Nightmare On Elm Street 3: The Dream Warriors came out in 1987 I had to close my eyes whenever I went past Tower Records in Piccadilly Circus as it had a window display promoting the film. Even the deeply ridiculous video for The Fat Boys’ Are You Ready For Freddy (released to promote 1988’s A Nightmare On Elm Street 4: The Dream Master) was more than I could handle.

It took a sort of aversion therapy in my mid-teens, where I sat myself down with a friend’s copy of the film, before I could feel normal again. Now I can happily (sort of) watch it anytime. Nevertheless, the anguish I endured in the intervening years remains fresh in my mind. If only I’d had the legally-safe comedic knockoff Scary Terry from Rick and Morty to help soothe my shredded nerves. Oh and I never bothered with the remake because it looked shit.