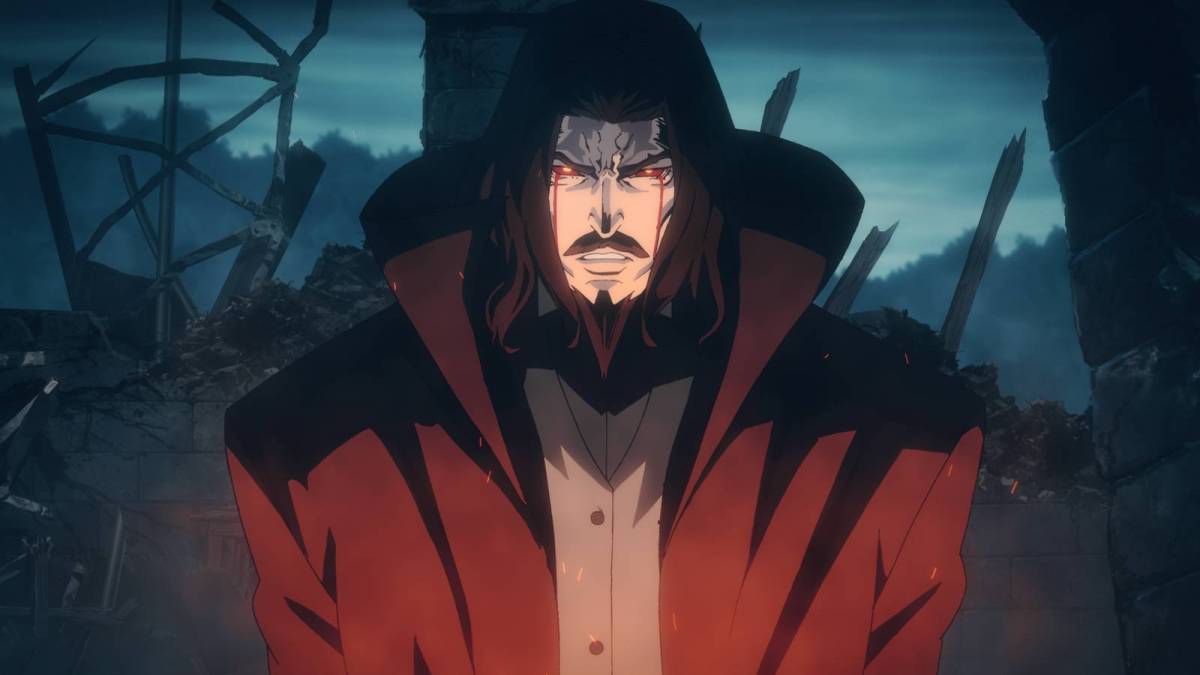 I have never really grown out of my fourteen-year-old-Goth phase. I still dye my hair darker than its natural mousy blonde, I read (and unironically adore) Anne Rice novels, and–most importantly–I have never stopped loving the long-haired, blood-soaked Gothfest that is the Castlevania game series.

I’ve been excited for Netflix’s animated Castlevania series–released today–for quite some time now. I’ve been eagerly following cast updates, and I’ve even been hunting down some of my favourite Castlevania cosplays in anticipation for today’s release. But has it all been worth it? I sat down with a glass of red wine and a pair of plastic vampire teeth to find out.

The series is presented to viewers in the form of four short episodes (averaging 20-30 minutes each), with a total length of 110 minutes. This might seem disappointingly short to some who were expecting a Game of Thrones-esque long binge session, but there’s a reason for the short length of the series: it began its life as an animated movie, which was then picked up by Netflix for sole distribution on their own streaming service. 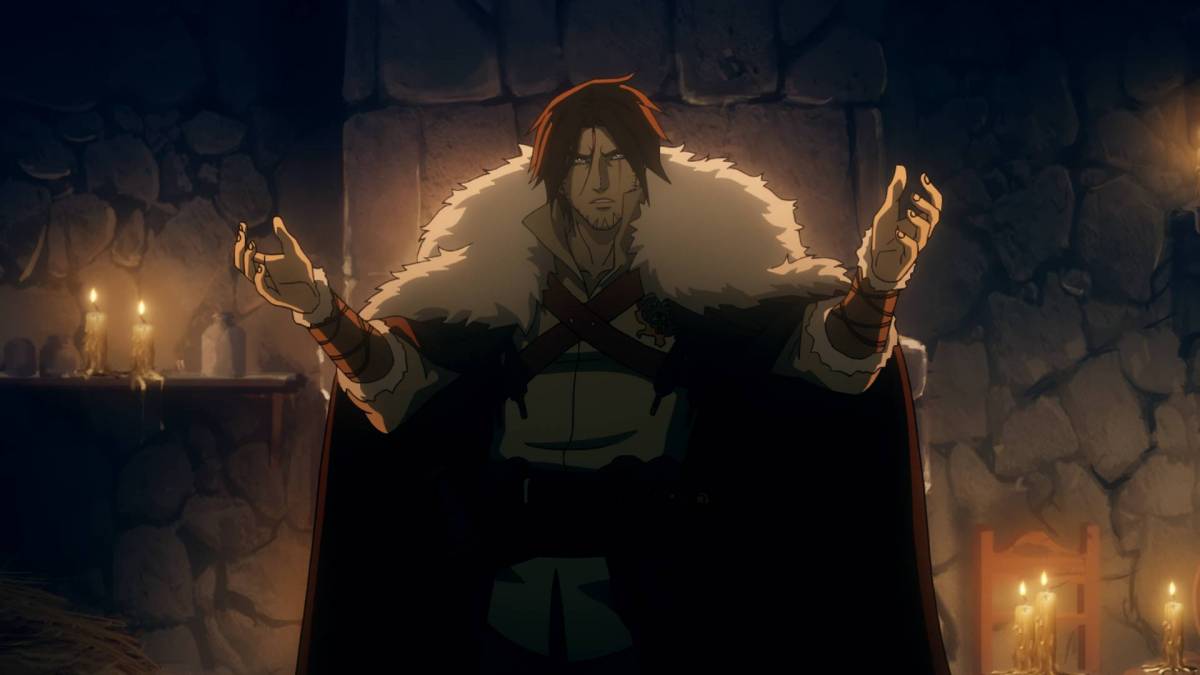 I was a little nervous going into the series, worried about the many, many things that could go wrong with an adaptation of something that meant so much to me, but my fears were put to rest by the end of the first episode. Episode one, Witchbottle, manages to give us twenty five minutes of suspense, drama and overall vampire badassery. The anime-style (I know, I know, it’s not real anime, it wasn’t made in Japan, don’t yell at me) animation lends itself well to Warren Ellis’ clean writing style, and the art has almost a vintage feel to it, as if I’m watching a VHS of a favourite adolescent series for the fiftieth time.

As well as the great art and writing, the voice cast are all sublime in their roles. Richard Armitage (Trevor), Graham McTavish (Dracula), Alejandra Reynoso (Sypha) and Emily Swallow (Lisa) are particular stand-outs for me, though the whole cast helps to add a beautiful sense of dread and drama to the series’ four episodes. The characters are the heart of this horrific tale, and they are more than just mere game-pieces in Warren Ellis’ vampiric playground: they have depth and feeling, and the choices they make are not as black and white as the choices we make in the Castlevania games. 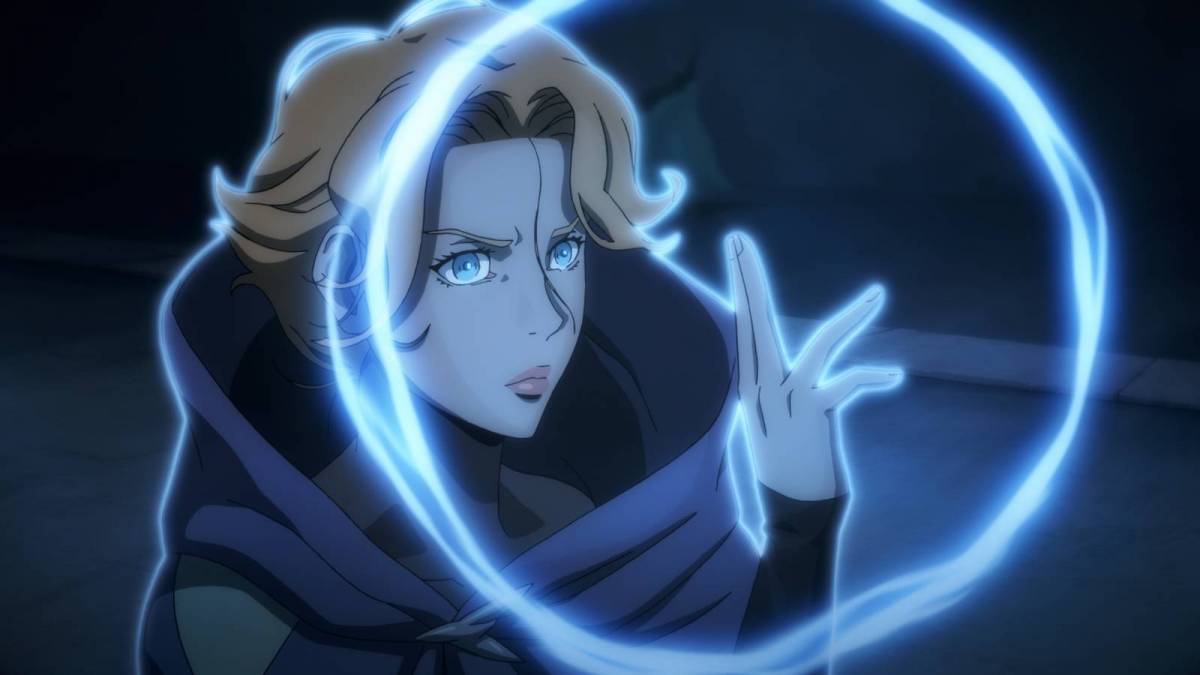 It’s a series for Castlevania fans, certainly–they’ll know some of the plot’s basic narrative beats from Castlevania III: Dracula’s Curse–but it’s also something far more complex and meaty that will appeal to anyone interested in fantasy or horror narratives. It’s broad enough to be an enjoyable series for people who have never heard of Dracula beyond the work of Bram Stoker or Christopher Lee, and the series presents the world of Castlevania as something horrific and tense that you really want to explore more of. Just like the games, you want to press on and on, even though you know there will be grave dangers ahead.

My main complaint? I wanted more. This short series feels like a beautiful prologue to something greater, and I hope that all of the people who hold the power (and the money) to fund more episodes will consider doing so. It’s a gift to Castlevania fans, but it’s also a great starting point for people unfamiliar with the games, or the larger world of Castlevania. I’m certain that the series will inspire a new generation of people to start researching and playing the games that have held a special place in my heart for so long. It made me want to grow my hair out long and buy a big overcoat with long coat-tails to wear whilst I sit on the edge of a cliff-face, contemplating my existence. And that’s all you really want from a series, at the end of the day.

What did you think of the series? Does it live up to your favourite Castlevania game(s)? Let us know in the comments below!

Verdict
A great start to the series, Netflix's animated Castlevania manages to combine complex writing with badass visuals to create something fun and exciting. More, please!
9
Cultured Vultures is a pop culture website established in 2013 covering all things gaming, movies, and more. We eat your words.
All The News On The Biggest Games