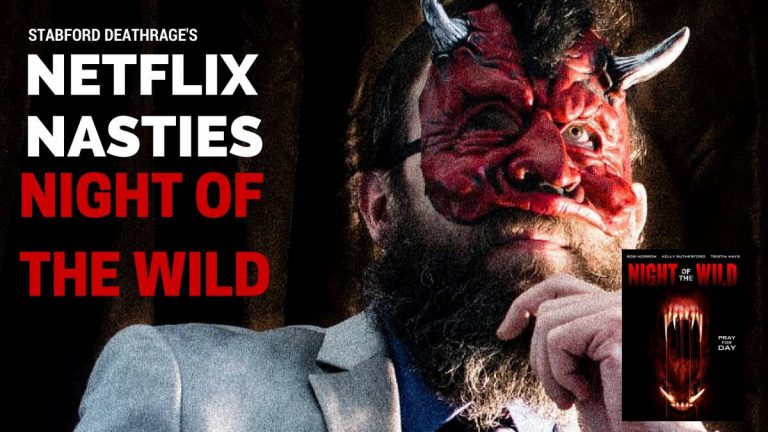 Dogs attack after a poorly-rendered meteor crashes in a small town in this unintentionally hilarious Asylum film.

Chunks of green-glowing meteor no one seems to notice causes dogs to change into killers amidst excessive shaky cam and a poorly-filtered, difficult-to-view day-for-night scene. Three young women off-road a pickup at the break-neck speed of nearly 3 mph, then the local coot screams at them for speeding. People pick up apples from beneath trees that don’t usually produce apples, then someone utters the phrase, ‘Love Noose’. I’m not sure why.

Suddenly, a wolf attacks and gnaws on the victim’s neck bone, and a cow has a close-up. I’m not sure why. The dog-loving main character repeated stabs a dog that was attacking her horrible friend, then a seeing-eye dog purposefully causes its owner to get hit by a car. Meanwhile, unconvincing dog puppets maul people amidst Wilhelm screams.

After fleeing the sound of howling dogs in the distance and conveniently forgetting where they parked the pickup, the main character’s other awful friend abandons her to run into certain unconvincing dismembered death. The survivors hide in a different pickup in a scene reminiscent of a different and better dog attack horror story, and then the main character stabs another dog with the mechanical ferocity of a not-especially-dog-loving wood chipper.

The seeing-eye dog attacks, hundreds of CGI cows are seemingly shot off-camera, and apple pickers are attacked by the hand puppet again because Rob Morrow needed something to do other than wear his baseball cap backwards. Dogs run around carrying severed limbs in the illuminated, inconsistently foggy, night-time, apple-picking carnage. I’m not sure why.

Suddenly, there’s a LOL-worthy scene as a teacup terrier is discovered to have eaten the face off its owner, the main street is littered with writhing dog attack victims, a limping pregnant woman wanders about screaming, the filmmakers resort to dog attack shadow puppetry, and a little girl rummages through entrails looking for a conveniently errant set of car keys. I’m still not sure why any of this happens. What seems to be a cast of thousands completely fills the town’s main street, all of whom seem to have walked their dogs at once and instantly suffered unlikely dog attacks, as though no one in the film has ever walked or owned a dog before.

In a WTF ending, the survivors leave their perfectly good automobile for an airplane because no Asylum movie would be an Asylum movie without an aircraft scene.