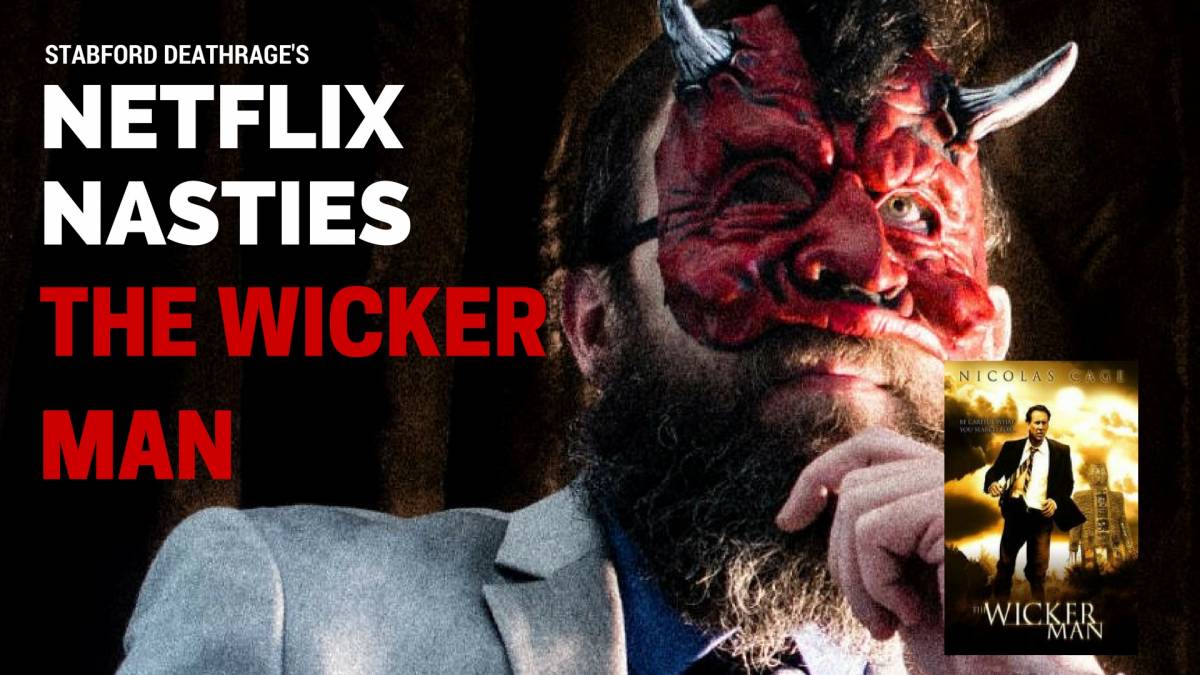 Nicolas Cage is mildly threatened by an secretive society of female apiarists in this tepid remake of the tepid 1970s cult film. Yes, I said it. The original Wicker Man isn’t nearly as good as you think it is, but that’s a discussion for another day.

A little girl traveling in a station wagon tosses her doll out the window. Motorcycle cop Nicolas Cage retrieves it. Suddenly, the station wagon is hit by a truck, which causes an explosion that kills its occupants and creates an existential crisis in Nicolas Cage, who then watches westerns on TV in a grey crewneck sweatshirt, which is the unofficial uniform of a nervous breakdown. In order to pull him from his doldrums, an ornately handwritten letter is delivered to him about a child which has gone missing from a mysterious island commune, which piques his investigative interest due to the letter being from a former flame who got away. Oops, did that sentence require a ‘spoiler alert’? Seriously, who couldn’t figure this out? No way. Nicolas Cage was shtupping the pretty letter writer who fled modern civilization to live in an isolated, all-female commune? Anyone? Anyone?

After bribing a pilot, Nicolas Cage makes his way to the isolated island village, and meets some women wearing threatening sweaters who behave suspiciously. Everyone blithely acknowledges a lumpy burlap sack that is dripping gore, and Nicolas Cage apparently left his investigative interest in his sweatshirt back home. Meanwhile, all the women extras in the film continue looking guilty, malevolent, and shifty, and it’s almost as if they regret being cast in this film.

At midnight, Nicolas Cage chases a hooded child into a barn filled with concealed vegetables, pigeons, and lukewarm jump-scares, and the filmmakers introduce heavy-handed plot devices such as epi-pens and ominous pigtails. Suddenly, Nicolas Cage points at a desk with a bird in it.

After an abundance of broken sentences which are meant to convey an atmosphere of menace and mystery, Nicolas Cage finds out the missing girl is actually his daughter while standing in the ruins of an ancient church. Oops, should I have said ‘spoiler alert’ again, even though everyone but Nicolas Cage could’ve guessed this for the previous 45 minutes?

More tedious, scare-free, dream-sequence-filled movie happens for almost forever. Nicolas Cage breaks into the island’s lone doctor’s house, where he discovers murky jars of fetuses. He unconvincingly helps a mute man with some logs, then he gets unconvincingly stung by bees because epi-pen.

After an enormous, tedious build-up, Ellen Burstyn finally appears as the haughty, sweater-draped earth-mother who rules this exquisitely art-directed and horticured-within-an-inch-of-its-life island dystopia, and she gleefully chews all the verdant scenery and destroys Nicolas Cage with withering glances and a disparaging vocabulary. She’s just awful, but she’s life-goals.

Finally, Nicolas Cage frantically runs about threatening women and children while breaking laws and claiming to represent it outside his jurisdiction while dressed as a bear. The film ends with unconvincing, unintentionally humorous CGI bees and human sacrifice.

The Wicker Man is a well-shot, expensive-looking long grift that doesn’t make a lot of sense. In the floral, honey-soaked world of The Wicker Man, women are puzzling, sinister shrews. Men are tools for breeding and heavy-lifting, and best when mute. Mothers are treacherous, fathers are disposable, but family is important. The Wicker Man’s facile symbolism of the feminine mystique, the occult, and ecology skims the surface like the ill-fated pilot’s seaplane, and little has changed in ten years in its portrayal of gender relations. Men are brutes, women are witches, and both sides are antagonistic and impenetrable.

In light of the recent presidential debates, don’t confuse its unfortunate timeliness with prescience, The Wicker Man deserves neither comparison, and it’s completely in line with the ersatz feminism Hollywood has flirted with for about 100 years. It’s another shiny, lazy, pointless remake that keeps getting churned out by major studios and people seem to be unwisely compelled to spend good money in a theater to see. Avoid The Wicker Man as if it were covered in aggressive hornets.