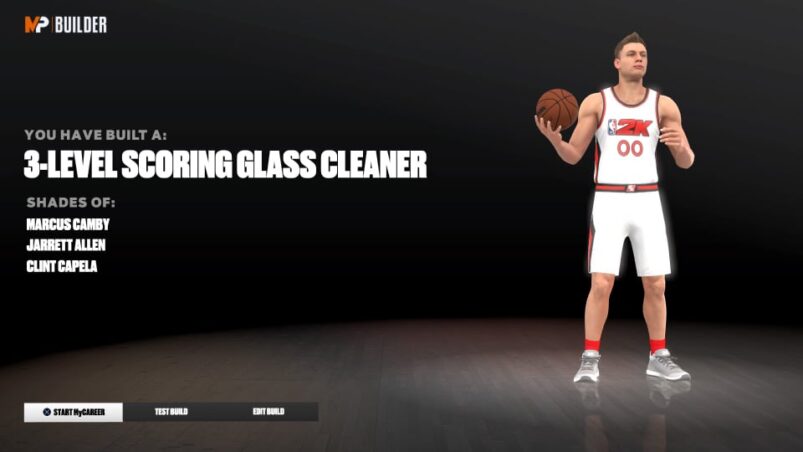 In the modern NBA, the role of the big man has been redefined thanks to players like Brook Lopez, Kristaps Porzingis, and bubble season Anthony Davis being monstrous presences inside the paint and viable shooting threats outside of it. While the days of the paint monster are far from over, the best way for players at the four or five spot to make their mark is by being versatile scorers, and the same is true for NBA 2K23.

Let’s go over all the details you need to know to create the best stretch big build possible in NBA 2K23. Our guide will include the desired physical stats, attribute caps, takeovers, and even some top tips on how to make the most of your MyPlayer on the court. Without further ado, let’s get to building the next Dirk Nowitzki. 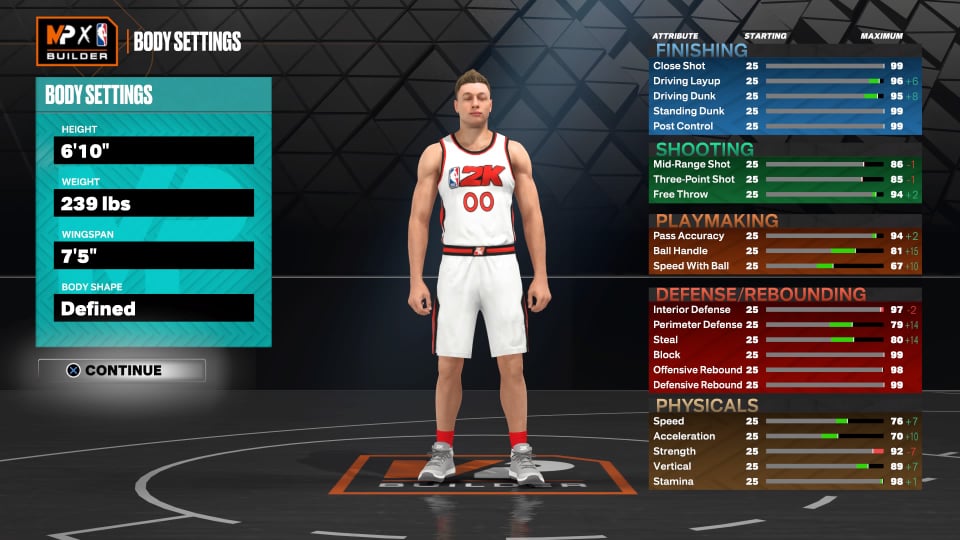 A height of 6’10” has been the go-to for agile centres in 2K games for the past few years. It provides enough length to be a pest inside the paint, especially on rebounding and dunking, while also keeping the speed/attribute caps relatively high.

In years past the weight could be exploited with ease and lowered to its minimum to make your player faster. We can’t do that in 2K23, however, as the strength stat is a necessary weapon to have in your back pocket for offence and defence. We find that 239 lbs. provides a decent boost to speed without sacrificing too much strength.

The wingspan is always a tough one to judge. Lankier arms make for a better rebounder and inside presence but are less than ideal for a shooter. The opposite may make you a sharpshooter but will severely limit how effective you can be in and around the paint. 7’5” is a perfect setting, as it will only take away one point from shooting stats but add big bonuses to the layup and dunk skills.

Finding the balance between finishing and shooting is the key to ensuring this build is as efficient as possible. We advise focusing on the standing and driving dunks as it’s more likely these opportunities will present themselves to a floor-spacing big. The close shot can be low as we’d recommend prioritising the mid-range or beyond-the-arc shots instead of shooting near the paint.

This right here is the bread and butter for any stretch big build in NBA 2K23. High three point and mid range shooting will make you a threat anytime a player leaves you open, especially if you load up on useful badges. Some guides will completely ignore the free throw stat, but we know from experience that solid shooting at the line can be the difference between victory and defeat.

This is the only area that can be completely ignored. There’s a <1% chance that you will ever be tasked with handling the ball in this position. As long as you’re not making really bad passes, your accuracy will rarely be an issue either, so spend those valuable points elsewhere.

As a centre (or even a power forward), it is essential that you have an impact on the defensive end. Luckily for you, our stretch big build can make one heck of a defensive monster. Blocks and both rebound stats are almost maxed while the others are just high enough to unlock the majority of defensive badges available. Blocks especially can be a crucial difference-maker in big games.

Max out speed and acceleration no matter what. As a floor spacer, it is key that you can move quickly to exploit defensive lapses and get open for shots. Strength is as high as can be to make sure that you don’t get bullied in the paint on either end of the court while a high vertical rating will make your shots almost unblockable. While not essential, it’s also good to have decent stamina as that makes it easier to sprint into space and take better shots. 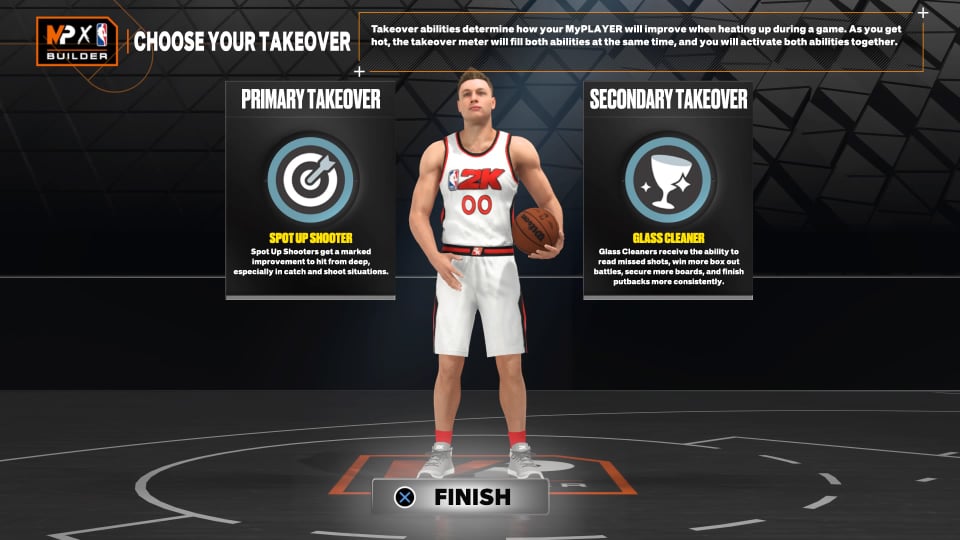 Each player will have a different preference here based on what it is you’d like to focus on. Since this build is explicitly designed to shoot, we would make the shooting takeover the primary option with rebounding as a secondary. But, if you’re aiming to be the next Wilt Chamberlain then the glass cleaner takeover is almost a cheat code for grabbing boards. 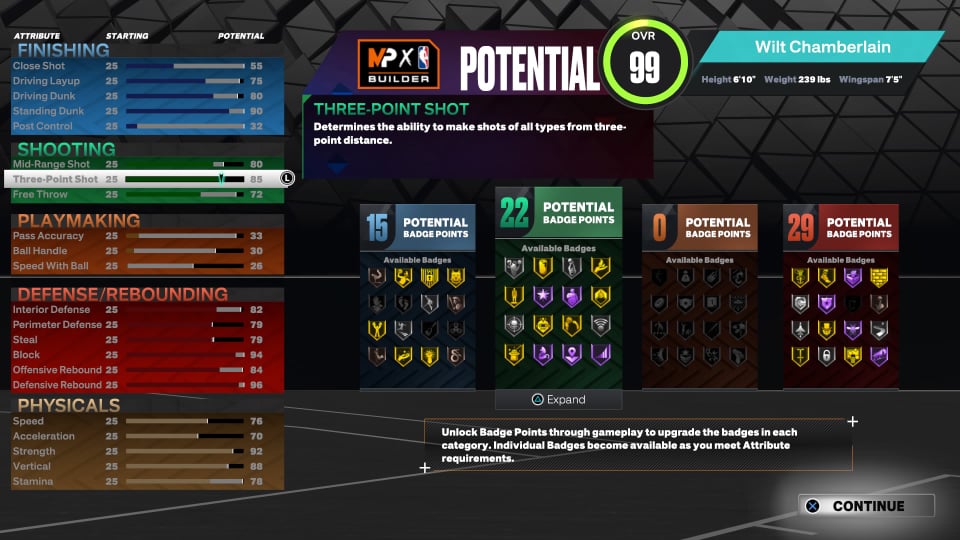 Unless you’re willing to part ways with VC or have rebirth unlocked, your player will start out with a low overall. Even the best build in the game can’t overcome the obstacles every player faces at the beginning of NBA’s MyCAREER mode. That is why we’re here to lend a hand with some helpful tips to make the most of this build and its attributes as quickly as possible.

Firstly, and this cannot be stressed enough, set screens! Screens are the lifeblood of any big man. Not only do you get a boost to your teammate grade when setting a good one, but it also opens up the opportunity for a pick-and-roll score or even a pick-and-pop shot attempt. Screens are vital to impacting the game before you have a chance to upgrade your stats and should be deployed as much as possible.

Focus on defending and rebounding early to maximise your impact on the court and earn some badges quickly. Rebounding is quite simple even when your stats are low, simply keep an eye on the other team’s big man, get between him and the basket, and box out for dear life when the shot goes up. It won’t always work but you should find yourself grabbing a few rebounds per game which will earn you some defensive badges to improve your play.

Pay attention to the defender tasked with guarding you and learn their patterns. Like real-life players, NBA 2K players have their own habits and weaknesses. If you find yourself being left alone often then move outside the arc and call for a pass to create an open shot. If someone is sticking to you like glue then move them away from the paint to open up space for a teammate to score a high-efficiency basket.

From there, all we can say is: play smart. While it may be fun to play like Lebron James, no MyPlayer build is going to replicate his abilities. Stick to what makes this build so strong: shooting ability, dunking at the rim, and defensive prowess. If you can master those fundamentals and learn when to pick your spots then you’ll be contributing to winning basketball in no time.