"Tina, you fat lard, come get some DINNER!" 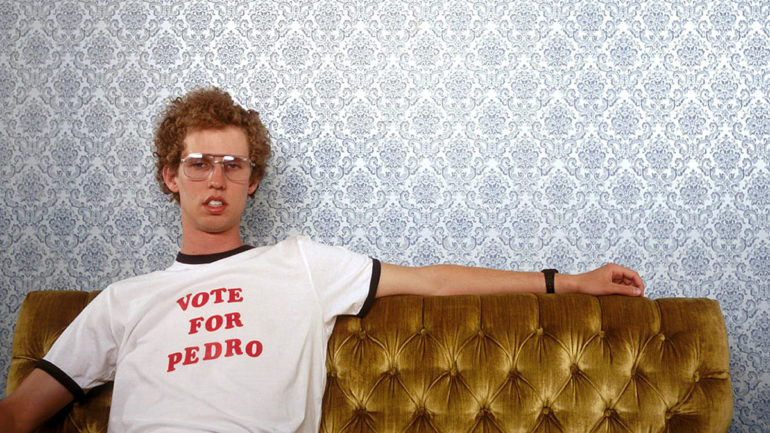 Speaking at a Wizard World panel about the movie, Jon Heder expressed his interest in doing a sequel to Napoleon Dynamite, and would be down for it any time Jared Hess (who directed and co-wrote the film with his wife Jerusha) decided it was time for a sequel.

It has been sixteen years since the release of Napoleon Dynamite, but that doesn’t mean the ship has sailed.

If we look at the Bill and Ted franchise, the second movie was in 1991, which means a twenty nine year gap between the second and third film, since the third movie was only released this year. Timing is everything, and nothing proves that more than Napoleon Dynamite reaching cult classic status all those years ago. Heder also mentioned that he thought the film was “a cult movie in real time”, which is such an apt statement when you think about it. It didn’t gain traction years later, it had generated such word of mouth immediately upon its release, which speaks to the film’s ability to reach all kinds of people, despite the rather focused subject matter and way of life.

It’s interesting how 2004 offered two films on the opposite end of the spectrum with regard to the high school experience. 2004 was also the year of Mean Girls (and The Notebook, but I digress), where new girl Cady Heron (played by Lindsay Lohan) gets inducted into the plastics, and while she initially joins because her newfound friends want her to, she gradually finds herself sucked into the world, and her attempts to overthrow queen bee Regina George are based on her own desires for popularity and being the It girl.

The focus of Mean Girls is really about girlhood and identity, and the lengths one would go to for acceptance and belonging. Napoleon Dynamite exists as a whole different ballgame. We spend most of our time with the titular character, who is an oddball and nowhere near the epitome of cool. In comparison to some teen movie movies about the outsider or the underdog, we see them reaching out for a modicum of acceptance (consider any John Hughes film), either by reinventing themselves, or find themselves in the predicament of liking the popular girl in school (Patrick Dempsey’s Can’t Buy Me Love comes to mind). Napoleon isn’t like that.

He’s a small town character, but there is no romanticisation here. Napoleon and his family are as real life as you get, seeing as how a lot of the film’s material is based off of Hess’ own life. Lyle the farmer, who shoots a cow in front of a school bus of kids in the film, really exists – let that sink in. Napoleon is a weird dude, and certainly socially awkward, but not really aware of that, which explains why he just goes for things sometimes, like asking the popular girl to play tether ball – I mean, he has a point, who wouldn’t want to play tether ball?

He befriends Pedro, who isn’t exactly at the top of the student body food chain, and is earnest in helping him with his bid for president. Pedro himself is quite the character. That whole sequence where he shaves his entire head because he feels too hot is the stupidest, funniest thing I had seen in a long time. The movie has abundant catch phrases, like “Vote for Pedro!” or “Gosh!” – the latter isn’t the most unique thing any character has ever said, but the way Heder delivers that line is so funny, pretty much any exclamative type of dialogue was good stuff.

I can’t talk about Napoleon Dynamite without mentioning the famous dance scene, which is all kinds of iconic. This was something actually added to the film because of Jerusha Hess’ discovery of Heder’s dancing abilities. She wanted to work this into the film somehow, and Hess decided that it would need to be the film’s climax after watching Heder dance. There was no choreography planned, just Heder improvising based on “Canned Heat” by Jamiroquai, which happened to be on the radio when the pair rode out to a dirt road so that Hess could get a sense of how Heder’s dancing could be a part of the film.

After being privy to Napoleon’s awkwardness for almost the whole film, suddenly this kid, who looks like he has no sense of rhythm, is grooving in the most entertaining of ways. More importantly, this is not an effort for himself. He is willing to face the possible embarrassment of performing an unrehearsed dance number, though to be fair, he might not be aware of the possible embarrassment involved, in order to help a friend.

If you think about dancing in films, usually it is this big, choreographed set piece, or even if it has an impromptu feel, like Tom Cruise in Risky Business, he’s making this great show of dancing in his underwear, but it’s in a private setting. For Napoleon Dynamite, this is a major dance sequence for the film’s climax, and it’s just one man dancing his heart out on stage – awkward and cool all at the same time. This scene truly captures the essence of the film, which is about embracing your own unfiltered sense of self. Too often, young people in films feel like they need to chase the holy grail of success, be it in academics, or popularity, an image of an elevated self, as opposed to who they really are.

Napoleon is a young man who goes around with tater tots in his pockets, with the most off-beat taste in clothes, but damn that dude can dance, and he also gets the girl, despite sharing with her that his favourite animal is a liger.

If a sequel does get made, it would be interesting to see which direction Hess takes these characters now that time has passed. Actor Efrain Antonio Ramírez, who played Pedro in the film, offered his insight during the Wizard World panel as to how he’d like the movie to play out. He mentioned that he feels that Pedro would now be married with five children while running a bakery, Kip would now be a cage fighter (of course), and Uncle Rico would still be scheming on the next big idea.

Ramírez is certainly onto something, so here’s hoping director Jared Hess decides to bring us to back to the world of Napoleon Dynamite again, even if we have to wait ten more years to get it.