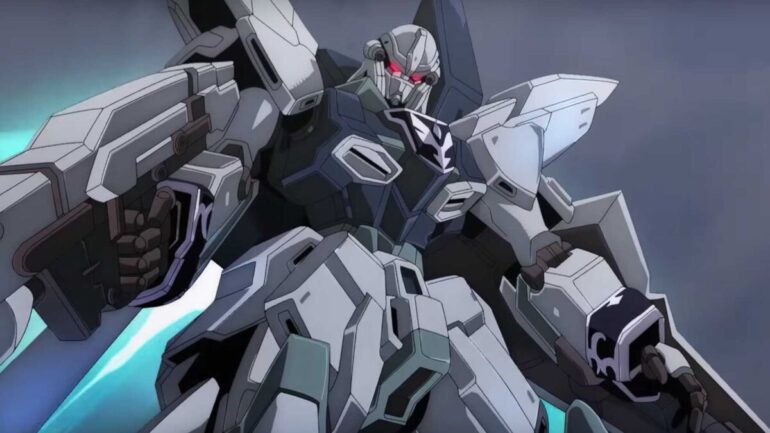 Across all those interstellar wars, tanks with faces, and child soldiers, the Gundam series has become a pop culture juggernaut, with its signature mech designs leaping off of toy shelves across the world. But no mech can do much at all without a human in the cockpit, so for all the toys they need to sell, the creators of Gundam have to make some memorable humans to go inside them. In order to make the flesh-and-blood folks memorable enough to compete with the mechs, creator Yoshiyuki Tomino and subsequent creators of the franchise have hit upon a pattern of naming characters with, shall we say, memorable monikers.

The following are all real Gundam character names: Zechs Merquise, Allelujah Haptism, Garma Zabi, Annerose Rosenheim, Biscuit Griffon, Trant Clark, and, say it with me now, Quattro Bajeena (now granted, that last one is someone’s alias, but still). To be clear: These names are awesome. By giving their characters names that didn’t follow traditional naming conventions, or even existing words, Gundam writers create characters with names that encompass their character via word texture, mental association, or allusion — all avenues of building character in how someone’s name feels.

But, to quote William Shakespeare (who despite being credited as a big deal never once came up with a name as good as Paptimus Scirocco, so he can get out of the way), “what’s in a name?” Let’s unpack some Gundam character names and see how we assign meaning to them. First, consider Amuro Ray, the young protagonist of the original Mobile Suit Gundam series. His surname, Ray, of course suggests a ray of light, a bright spot, a source of warmth, but also might suggest a ray gun or death ray, staples of science fiction weapons. His first name, Amuro, is a soft word, free of any hard stopping consonants, so that his whole name can easily roll off the tongue, coasting over the two Rs like two gentle hills. The general mouth feel of ‘Amuro Ray’ is soft, inoffensive, a sort of verbal blank slate for us to attach onto in its youthful openness.

Let’s contrast that with the name of Amuro’s chief rival, Char Aznable. Tomino confirmed at Anime Expo New York in 2002 that Char’s name is derived from French-Armenian singer and diplomat Charles Aznavour. In addition to this association to The French Frank Sinatra, Char’s name also contains more linguistic layers. The first name, Char, suggests charring, burning, scorched earth. The hard CH- make for a combative sound, and the three sharp syllables of his last name, Az-Nah-Bull, reinforce that harshness. His surname is also homophonic to ‘As Noble,’ adding extra distance between Char and the rest of the world. It makes sense for Char’s character, as he’s a prickly, distant, ruthless individual, pursuing his own secret agenda even in the midst of massive war. He’s uninterested in anything that gets in his way, and willing to leave scorched, or should we say charred, earth behind him. Amuro’s name is an extended hand, whereas Char’s name is a thrusting sword.

There are endless other examples, such as Bright Noa, Amuro’s captain, with a similar light-evoking name, and a second name with a strong biblical association. There’s the Gundam trope of the political idealist woman, give or take a connection to the series’ main villain: Sayla Mass, Relena Peacecraft, and Kudelia Aina Bernstein. Each of these women have names that point toward higher society. Sayla Mass, evoking Catholic Mass, Relena Peacecraft, uh, crafting peace (and if that sounds on the nose, don’t forget the people in the real world with last names like Taylor, Fisher, Potter, Gardener, etc.), and Kudelia Aina Bernstein, with her three ornate, Elizabethan-sounding names — Kudelia an approximation of the name Cordelia, a Shakespearian association to boot.

For a parallel example of creating memorable character profiles through naming alone, let’s jump back to 8th grade English class and blow the dust off of our neglected copies of Great Expectations to study the similarly idiosyncratic naming conventions of one Charles Dickens. From the stumbling, gangly Nicholas Nickleby to the whimsical Mr. Fezziwig, Dickens had a similar spirit of giving his characters that were less tied to existing family names or name trends of his setting, and more connected to the inner feelings of said character.

For example, consider Pip, the bright eyed dreamer protagonist of Great Expectations. His real name is Philip Pirrip, a repetitive name that might suggest the whimsical trilling of birdsong, or basic monosyllabic babble of a baby learning to speak. When his name is shortened to ‘Pip,’ it’s basically an onomatopoeia— a sound effect, like something springing above Batman’s head in a comic book. The sound of an excitable kid striking out on his own: Pip!

There’s also the protagonist of the renowned holiday Muppets classic, A Christmas Carol, Ebenezer Scrooge. All those ‘e’s in his first name hinge on the menacing Z in the stressed syllable, calling to mind Geezer, misers, fleas and buzzards. His last name cramming in all the negative connotations of similar words like cruel, ghoul, stooge, “scrouging,” (an antiquated English word meaning “to crush or squeeze”) and screw, a 19th century British slang for a miser, and also in our modern parlance, a good descriptor of what Scrooge wants to do to his employees, his enemies, and everyone else in the world at the start of the story.

Dickens wants you to have an opinion on a character, to feel what a character is about the moment you meet them, as illustrated in other sterling character names like Uriah Heep, Mr. Pumblechook, Woolwich Bagnet, and Mr. M’Choakumchild (who is, of course, a schoolmaster). Whatever ideas you might have about these characters just from reading those names, you’re likely closer to correct than you might think.

Now of course, plenty of other writers put a lot of thought into creating memorable, unique names for their characters. But the maximalist flavor of names in the Gundam franchise stands out as an example of building tone and world by building the type of people that exist within it. Plenty of stories have giant robots in them, but very few can boast having giant robots and people named Treize Khushrenada, Chibodee Crocket, Ramba Ral, and…Full Frontal. All of these are real, and all of these suggest the depth and breadth of identity allowable within the multiple timelines that share the brand name Gundam.

Names are how we differentiate ourselves from the rest of the world, and how we sum up every impulse, interest, and aspiration that is ours. Names for fictional characters function the same way, and by painting with so many brushes in so many grammatical and linguistic styles, even when it may seem comical in or out of context, the characters of Gundam all feel unique, memorable, and distinct. No small feat for a 40+ year franchise.

These names are like architecture: Brutalist, Baroque, Byzantine, Rococo – whatever you want to call it, these words have a sense of dimensionality, containing feeling, texture, and weight. Say these names out loud, they force your mouth into strange and unusual shapes, giving the world of Gundam an energy and imagination that a series with more contemporary names would lack. By transcending ideas of what can and can’t be a name, Tomino and his successors in the franchise have created a deep vein of characters whose names will live forever, be it in fame or infamy.

And to that we say, long live Quattro Bajeena.