Misery – The Psychology of a Stalker (Blu-Ray) REVIEW 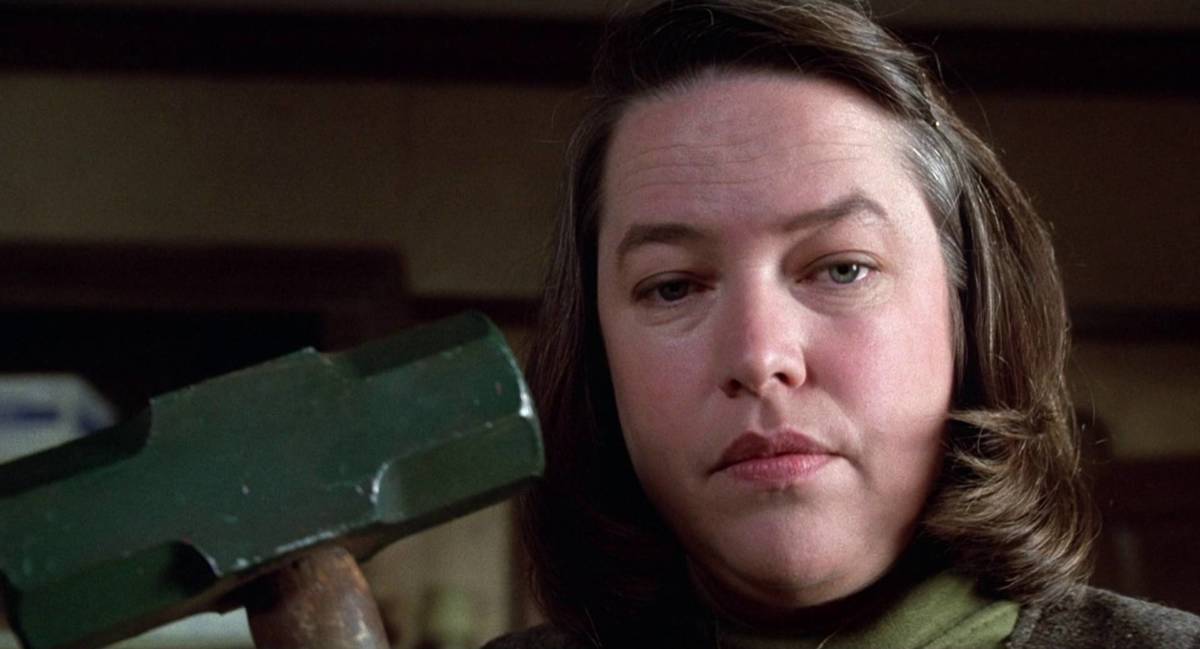 For me, Misery was always mostly about an artist fighting against the whims of an audience resistant to change. A writer depends on their audience for support, which includes money if they happen to make any. But a writer is also subject to the desires of their heart. In this way, Misery says a lot about all sorts of pop culture fandoms that become completely irrational in their dogmatic devotion. Looking at the new Shout! Factory Blu-ray release, I noticed a lot of other things. I was very much drawn to what I now recognize as Annie Wilkes’ borderline personality disorder, for instance.

Wilkes (Kathy Bates) rescues bestselling author Paul Sheldon (James Caan) after he has a car wreck in a remote area of Colorado during a snowstorm. She takes him to her farmhouse and, since she’s a nurse, she sets his broken legs and puts him in a bed in her guestroom to recuperate. This is only supposed to last until the roads are clear and an ambulance can come pick Paul up and bring him to a proper hospital. But most of us know the story. This isn’t what happens. Instead, Annie, full of delusions of grandeur that she will become a companion and muse to Paul, keeps him captive in a little room for months.

Wilkes’ psychology is complex, and it’s all abnormal. She’s a pathological liar, but she always finds a way to rationalize, to justify herself. Like a typical borderline, she will not admit that she’s wrong, and she won’t accept responsibility. She’s all about self-justification and emotional highs and lows. And like a lot of borderlines, she’s able to hide her illness for a while, but when her anger is unleashed, it becomes impossible to put that genie back in the bottle.

Director Rob Reiner and screenwriter William Goldman (who adapted the script from a Stephen King novel) give us plenty of time to breathe. We get relatively comfortable between each outburst of violence, which helps make the brutal acts more shocking. In terms of runtime, there’s not a lot of violence, but when it happens, it’s almost shocking in its intensity. The movie is remembered, after all, for the scene where Annie Wilkes smashes Paul Sheldon’s feet with a goddamn sledgehammer to ensure that he has no means of escape. 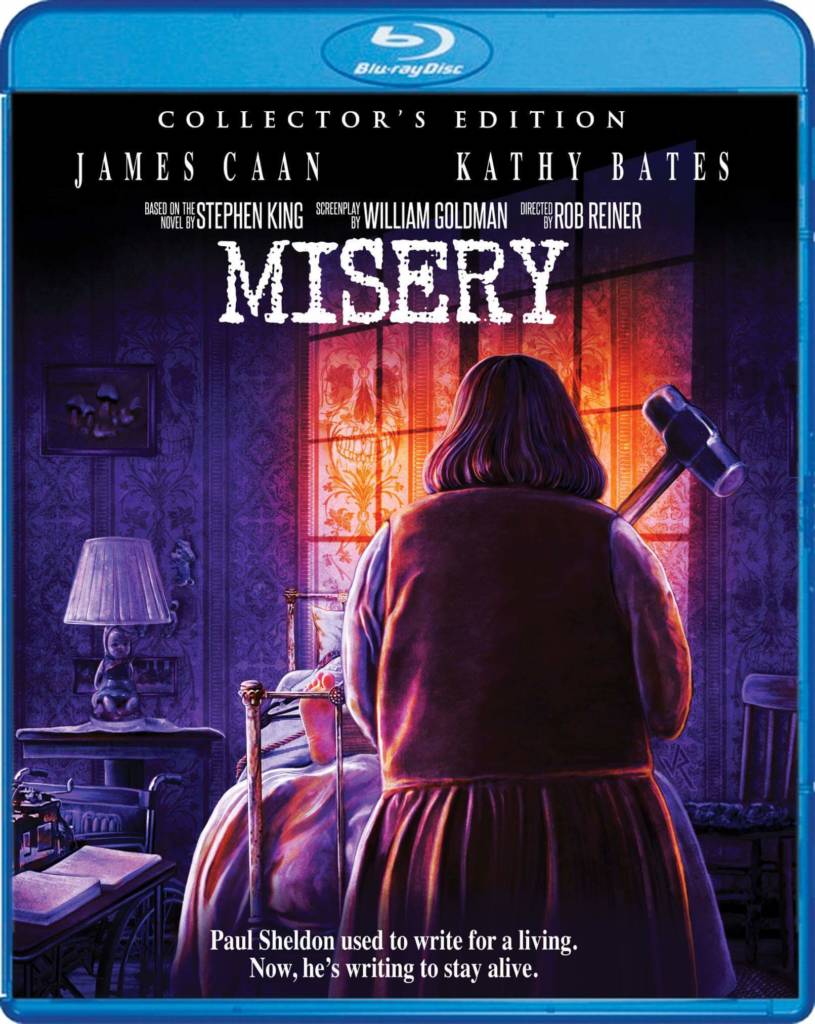 Lots of POV shots in this flick. The movie is mostly just these two people, with a few sojourns outside the house as a local sheriff searches for Paul. Quite impressive, of course, that the movie is able to pull off nearly two hours of mostly being in the same location. And so we get the POV shots because these two people are constantly trying to size each other up, to get into the other’s head. Reiner also employs obligatory low and high angle shots. This is a thriller, after all, and one must ape Hitchcock. But for the most part, the film is shot pretty straightforward, in a manner that isn’t distracting.

The casting is perfect, though there aren’t a lot of big roles. Lauren Bacall is Sheldon’s agent. Richard Farnsworth plays the sheriff who investigates Paul Sheldon’s disappearance. Farnsworth is obviously not as well known as Bacall, but if you’re a fan of westerns from the 50’s and 60’s, you’ve probably seen him in bit roles. The Bacall casting made me think of the contrast between old Hollywood and the new. It seemed to mirror the transition that Paul Sheldon wanted to make. Old becomes new. The symbolism seemed intentional and quite brilliant, but I learned on the Rob Reiner commentary track that it was actually Bacall’s agent who suggested her for the role. No matter, though, I think the symbolism still works even if it is unintentional.

James Caan is great, of course, but the center of gravity is Kathy Bates. The entire movie hinges on the believability of her performance. This is no easy task when you consider the range of emotions that have to be conveyed effectively. And Bates also had to play a person who believes every second of these emotions as they happen. This was Bates’ first starring role, and she won a well-deserved Best Actress Oscar for it.

This Shout! Factory special edition is packed with special features, including commentary tracks by Reiner and Goldman. I hope you like re-watching the movie, because half of the Rob Reiner commentary consists of him saying nothing and I guess just sitting back and watching the movie with us. But when he does speak, it’s not uninteresting. He mentions that he related to the story because of his own transition from sitcom star on All in the Family to a director of major motion pictures. Also, Reiner seems to have enjoyed torturing James Caan. He would apparently approach the guy on each day of shooting and say, “Okay, today you’re gonna be in bed,” since, well, that’s what he actually was doing most of the time. But Caan is such a physical actor that he was frustrated with having to lie in bed for big stretches. Reiner says that this frustration helped his performance, and I can’t help but agree.

There’s a lot of pauses in the Goldman commentary, too, but I’ve always found his crotchety but enthusiastic conversation style fascinating. There were negotiations for a lot of lead actors before Caan was chosen, and Goldman has great insight as to why: “Movie stars don’t like playing subordinate to women.” Well, the other actors missed out, then, because the Paul Sheldon role is fascinating, a kind of character study that doesn’t happen very often in mainstream Hollywood movies.

Also included is a new interview with Reiner. I would recommend watching this instead of listening to his commentary. It moves along at a clip and covers most of the same information,. If you’re into the score, there’s a pretty meaty interview with composer Marc Shaiman.

Also of quite a bit of interest for me was the interview with special makeup effects artist Greg Nicotero. It was fascinating to see the kind of passion and dedication that goes into practical effects that the audience only sees for a few seconds or less. Those seconds are crucial, of course, so it’s worth it if you’re into that kind of thing. The face sculptures of Kathy Bates in various states of distress were fucking terrifying.

There’s some other stuff, but it largely felt like filler. There are four mini-documentaries featuring talking heads exploring the topic of stalking and stalkers, just in case you ever find yourself in a Paul Sheldon/Annie Wilkes kind of situation.

Well, this was a hell of a disc. If you want to know pretty much everything about Misery, you could certainly do worse. As it stands, this is the definitive edition.

Misery will be released on Blu-ray on November 28th, 2017