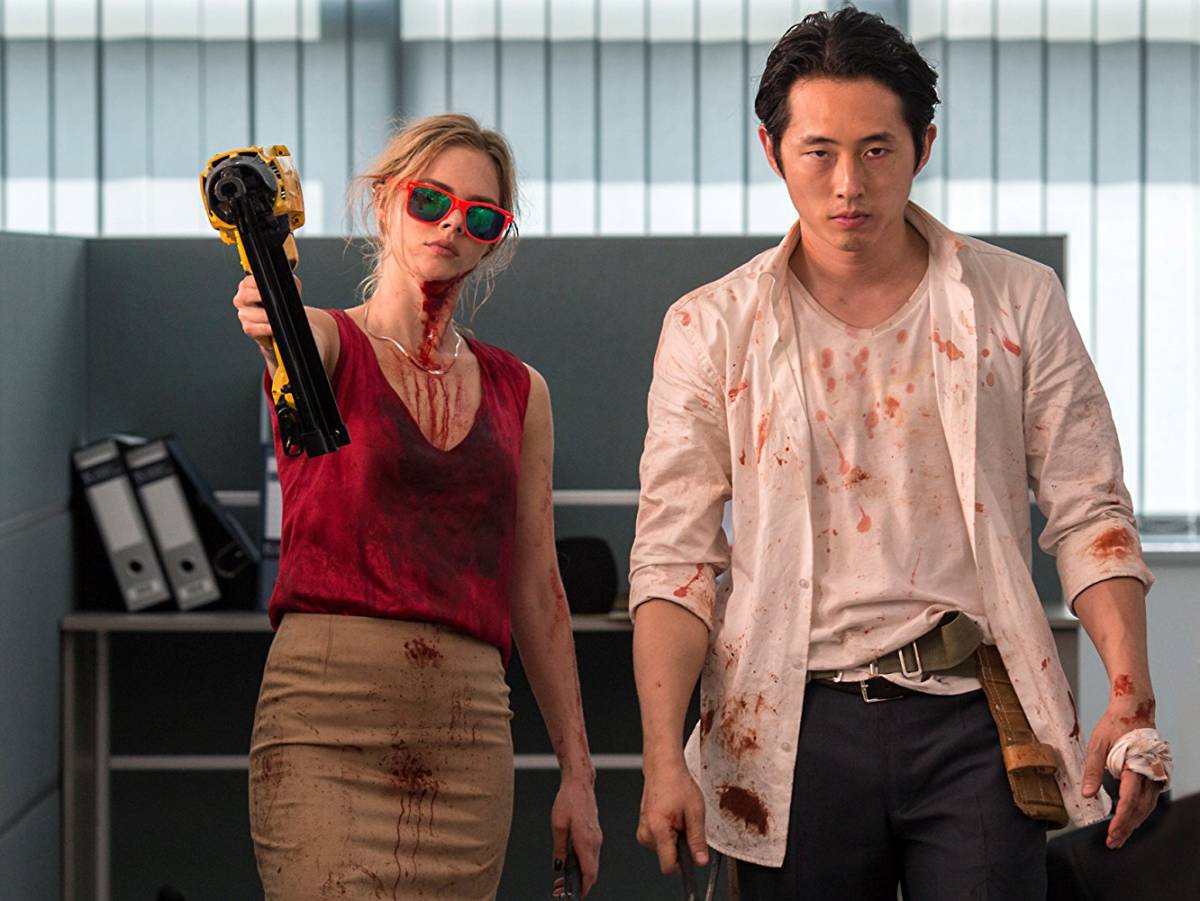 What would you do if you could lose all your inhibitions and not be culpable for anything you do? Would you finally tell people who eat with their mouths open that they’re Satan? Intentionally leave the toilet seat up? Or would you go as far as murdering your boss?

That’s the situation facing Derek Cho (Steven Yeun) in Joe Lynch’s aptly-named Mayhem. Infected by the ID7 virus that turns its sufferers red-eyed and make them forgo their morality, he’s allowed to wreak havoc on the bigwigs who wronged him, one sneering executive after the next. If you’ve ever felt under the heel at work, Mayhem is a movie that you’re going to revel in.

With the whole of his office building infected and a cure eight hours away, Derek has to make his way through the carnage while in the knowledge that he has total impunity for anything that happens. Thanks to a loophole in a case he worked on that saw a “redder” walk free after killing his colleague, Derek knows that he has eight hours to enact any kind of revenge he wants. It’s a simple hook but one that turns the movie into a gloriously violent but never masochistic playground all the same.

From the outside looking in, Mayhem might appear to owe some inspirations to the likes of Dredd and The Raid, but whereas those grim murder marathons rarely showed signs of levity, Mayhem has them in abundance. It constantly winks at its audience, cheekily inviting them along for a blood-soaked rampage with every knowing swing of a hammer.

Stylistically, Mayhem is a breathless ride with jump-cutting montages moving things along at pace while also holding the interest where it needs to. Without wanting to do a disservice to Lynch’s vision, it feels partly inspired by the work of Edgar Wright. However, where some of his imitators may falter (McG’s attempts with The Babysitter, for example), Lynch takes that editing style and puts a maniacal spin on it. It’s a dark movie, make no mistake about that, but Mayhem is also one of the most bizarrely jovial movies I’ve seen all year, buoyed by just how damn earnest it all feels.

Derek, played superbly by Yeun with the shackles of The Walking Dead’s Glenn thrown aside, has clearly been chomping at the bit to land a role like this. Mayhem allows him to really show off what he can bring to the table as an actor, helping people to forget that he’s not just a loveable dumpster diver. He excels here, coming across as revelatory as Tom Cruise in Risky Business; an energetic and bustling performance brimming with charisma. This could be the start of big things for the actor.

As good as Yeun is, it’s hard to think about how Mayhem would have fared without Samara Weaving’s Melanie. Every time I see her onscreen, she has this magnetism that’s impossible to deny – a natural charisma that makes every interaction between she and her co-stars so natural and entertaining. Weaving is a total revelation here, killing and cackling along with abandon at the twisted things going on around her. As long as she keeps getting challenging and interesting roles like this, Weaving has all the tools to be the next big thing.

Mayhem also never outstays its welcome, though I honestly would have loved to spend a little while longer in TSC Consultants. If you love action movies, heart, and getting the motherfucker of the phone, Mayhem could very well be one of your favourite movies of the year.

Mayhem is in theaters and VOD services from November 10th.

Verdict
An exhilaratingly morbid movie with plenty of heart to match the blood, Mayhem is anchored by the chemistry of its two leads and a knowing smile.
8.5
Cultured Vultures is a pop culture website established in 2013 covering all things gaming, movies, and more. We eat your words.
All The News On The Biggest Games