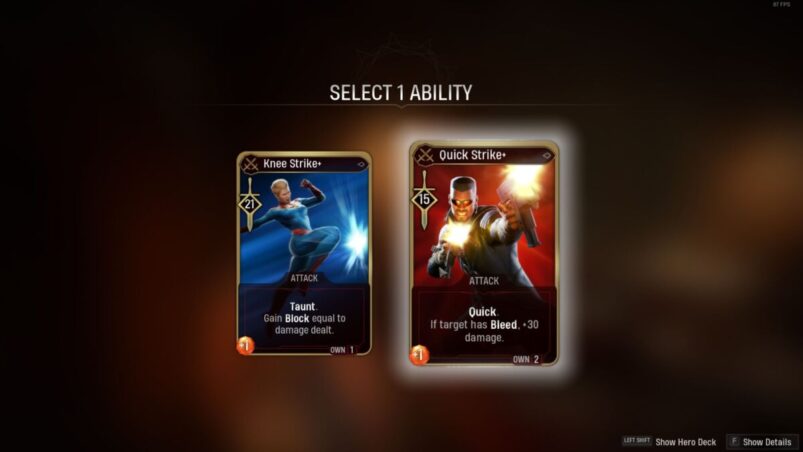 Cards (otherwise known as abilities) are what the majority of the combat gameplay in Marvel’s Midnight Suns revolves around, but it’s not clear early on how you can unlock more to really flesh out your deck. There are many ways of organically unlocking cards as you progress through the game, whether it’s a Heroic, Skill, or Attack card.

The most significant way to unlock new cards is to simply complete missions, whether that’s a main story mission or something more general. Almost every single mission in the game gives you a Gamma Coil, which you can then take to Tony in The Forge to unlock a couple of new cards each day from a selection of randomised choices.

While that’s the main way of fleshing out your deck in Midnight Suns, it’s by no means the only one, as the game is constantly doling out new cards to you after a certain point.

One of the other more prominent ways of adding to your deck is to complete Hero Ops, which unlock after a handful of story missions have been completed. These involve you sending out a hero on a mission independent of you for a day, so if you want to beef up a specific hero’s deck, this is the best way to do it. Bear in mind that they won’t be able to join your team for any missions if you’ve sent them out on a Hero Op, and also that you will need Intel, which you can mine from Intel Caches that you can earn on specific missions. Once the hero returns, they will have a new card that depends on the rarity of the mission itself.

The other best way of getting new cards in Midnight Suns is to unlock the ability to craft blueprints by completing the research for the Book of the Vishanti with Doctor Strange.

This basically allows you to duplicate any of your current cards by spending essences to craft a blueprint, which can be spent on ability crafting — basically duplicating a card you already have. What’s good about this is that you can take any duplicate cards to The Yard and then upgrade a card you have in your deck.

Elsewhere, players can also unlock new cards by attending clubs, such as the Emo Kids Club and Shop Class.