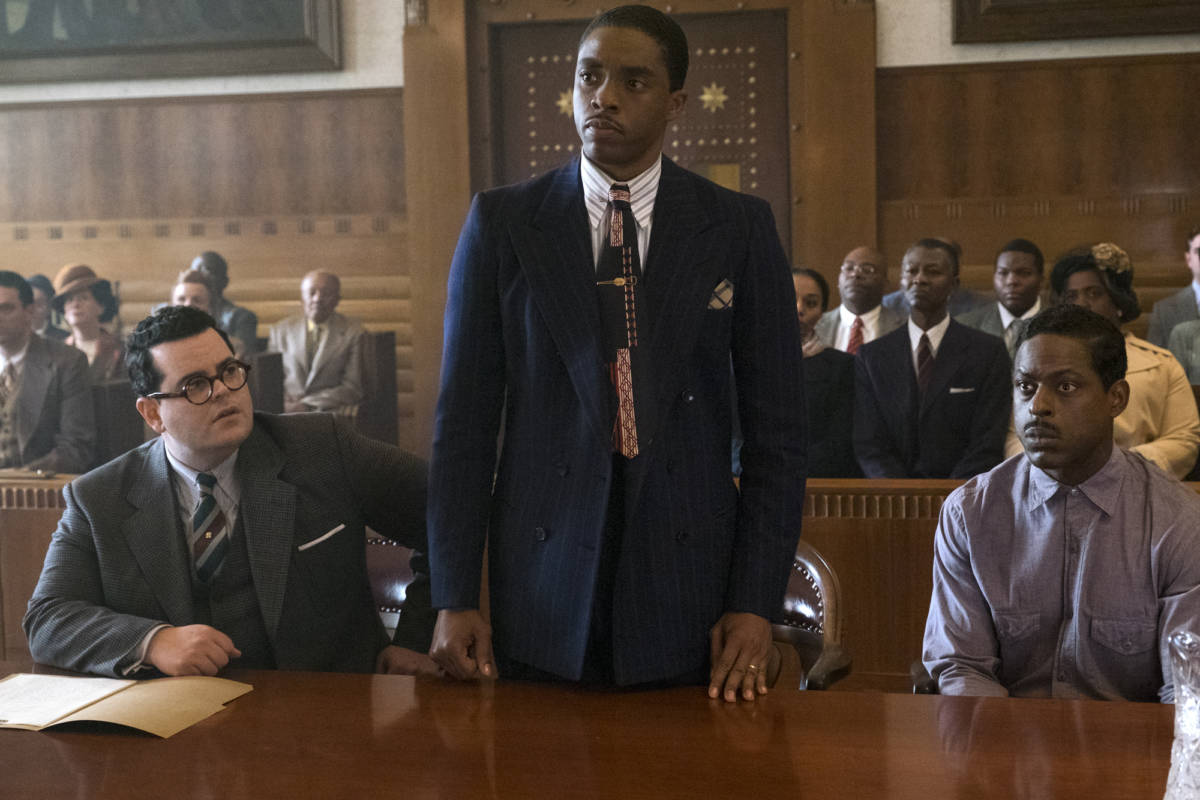 In getting a glimpse at the life of former Supreme Court Justice Thurgood Marshall, Marshall offers thrills, mystery, and gripping storytelling.

For a historical figure such as Justice Marshall, the question when approaching a biopic is how many years in a person’s live should be depicted. In Marshall, they wisely selected one case to follow rather than span the entirety of his adult life. Because they decided to focus on one court case, the film is able to stand alone as a riveting courtroom drama, too. If filmmakers had known just how much would be made of sexual harassment in the film industry when Marshall was opening, they might have considered tackling the historic 1954 court case, Brown v. Board of Education, instead.

Marshall takes place in the 1940s and because of the courtroom drama at hand, it feels so much like the Gregory Peck classic, To Kill A Mockingbird. That’s not to say it’s a remake, because it certainly isn’t – the former was fictional, but Marshall is very much inspired by a true story.

It’s 1941 and Thurgood Marshall is working for the NAACP, but his career isn’t at the point when he’s the Thurgood Marshall just yet. His boss, Walter White, assigns him to work a case in Connecticut, where the attorney is tasked to defend Joseph Spell (Brown). The chauffeur has been accused by Greenwich socialite Eleanor Strubing (Hudson) of having committed sexual assault and attempted murder. If it were taking place in 2017, Spell would have automatically been convicted on social media and be found guilty long before he stepped foot in the courtroom. However, it’s 1940 and the racism of the era is at play.

The racism doesn’t just affect the black servants because the government attempts to silence Marshall as well when Connecticut trial attorney Samuel Friedman (Gad) tries to get him admitted to practice in Connecticut. Unfortunately, it doesn’t fly with Judge Colin Foster (Cromwell) and Marshall plays more of a supporting role in the case as a result, rather than an attorney who speaks. Lorin Willis (Stevens), who is prosecuting the case for the state, seems to think the victory is in his hands.  Nobody sees what’s coming.

Because it’s mostly been forgotten, The State of Connecticut v. Joseph Spell makes for an interesting case to cover in the film. This case precedes the notable Civil Rights cases that most Americans are taught about in history classes – the racism depicted in Marshall is awful and just as bad as it was in Detroit. In choosing such a case, it doesn’t make the film any less dramatic, but the historic 1954 case would have made for a stronger Thurgood Marshall biopic.

Boseman is terrific: he may not be Black Panther or Jackie Robinson in the film but there’s some strong acting performances on his part. Boseman is great on screen when dealing with Gad, even when the judge tries to silence Marshall in the courtroom. That said, the film plays more like a Josh Gad vehicle than a Marshall biopic.

Make sure to stay for the credits to hear a potential Oscar nominee for best original song, “Stand Up for Something.” Written by Diane Warren and Common, the song is performed by Andra Day and Common.