Its fantastic art and concept cannot help Mainlining on Switch from being an absolute chore to play. 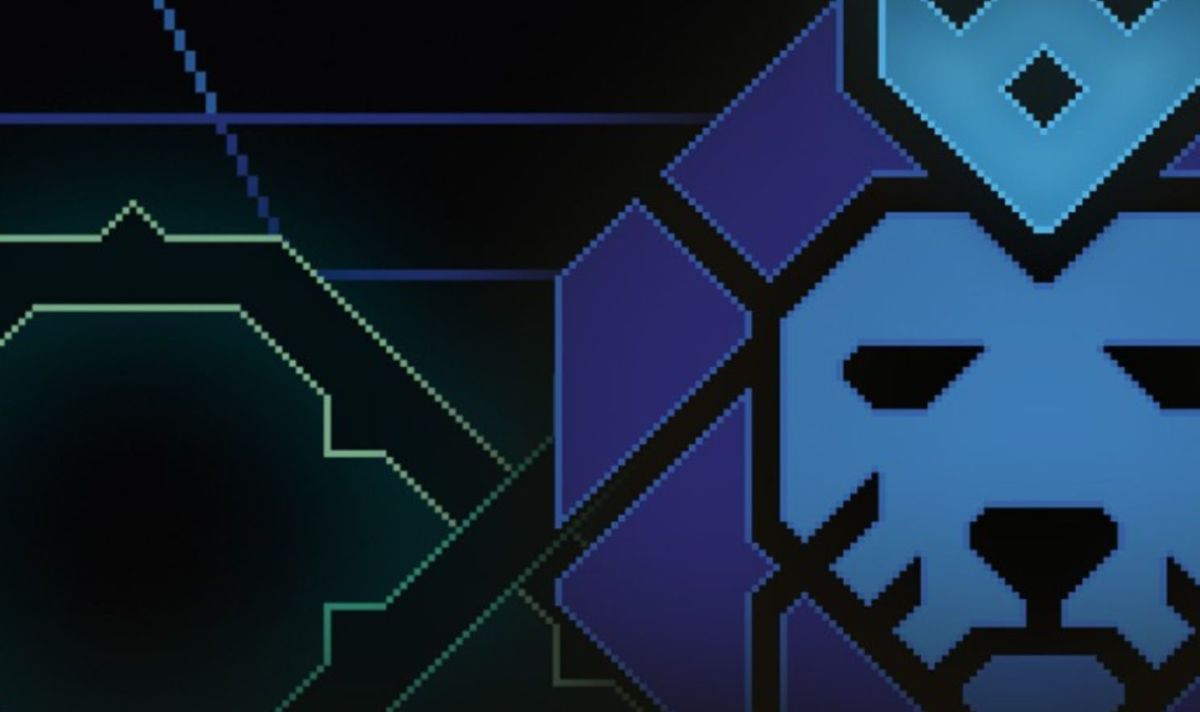 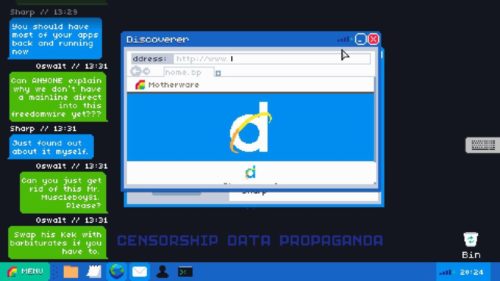 No matter how great a game is, all the hard work from a developer can be ruined by a single bad port. You need only remember the port of Batman: Arkham Knight for one of the most infamous examples, which turned the well received ‘final’ Rocksteady Arkham game into a total mess on PC. While Mainlining’s port might be equal in terms of technical achievement in comparison to its PC cousin, it fails as a port on various other levels.

First, allow me to say that Mainlining is a lovely looking game. From the screenshots, you can easily recognise a pixel-style version of Windows XP, through which you have access to various hacking tools. You’ll search the fake internet for clues and hack websites to gain hidden information and bring the hackers who hacked into MI7 to justice. 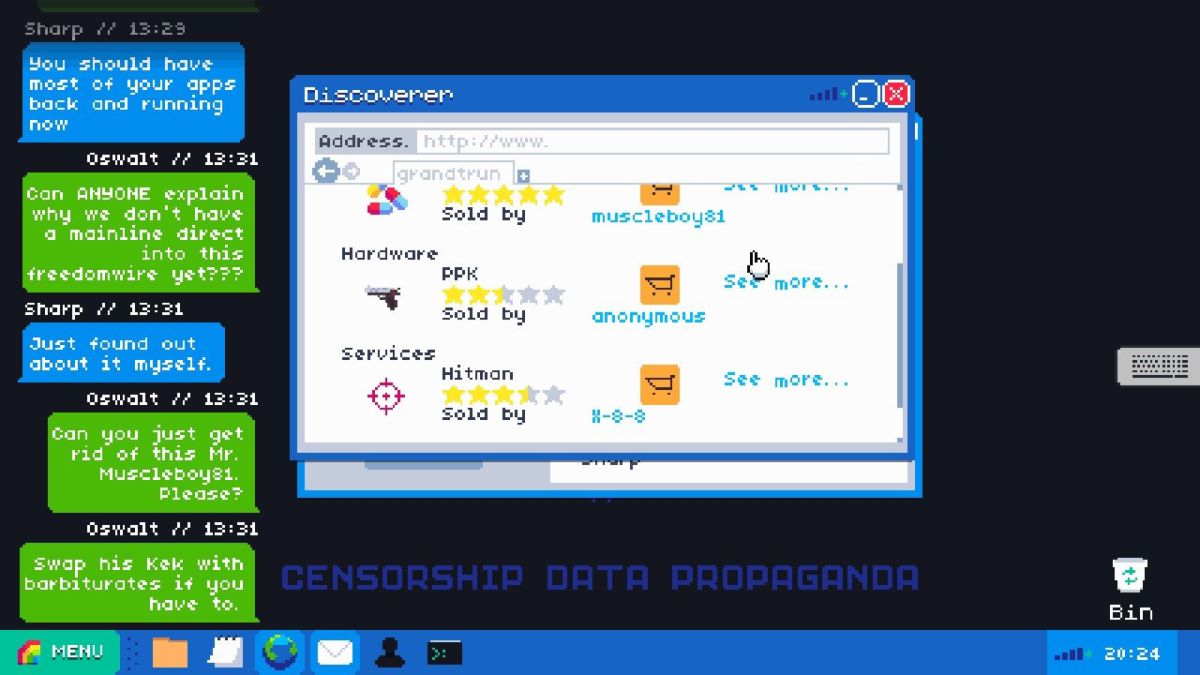 While initially looking like a lo-fi hack-em-up in the vein of Uplink, Mainlining is actually more of a puzzle game. Whereas the game appears to be about being a cool government hacker, you’ll be more so looking around the internet to find clues to progress in the game. In fact, Mainlining reminds me ever so slightly of In Memoriam, one of my favorite (and now unplayable) games. In Memoriam would have you searching on fake websites on the real web for clues to stop a serial killer, which is not too dissimilar to Mainlining’s premise.

Hacking tools can provide you with information hidden away on websites. For instance, in the opening case, you’ll be attempting to find out the true identity of Muscleboy81. Using your tools you can access various files hidden on the site, but it’s not quite as simple as looking through the first files you find to catch the culprits. You’ll need to dig around, often through a number of sites to find something useful. 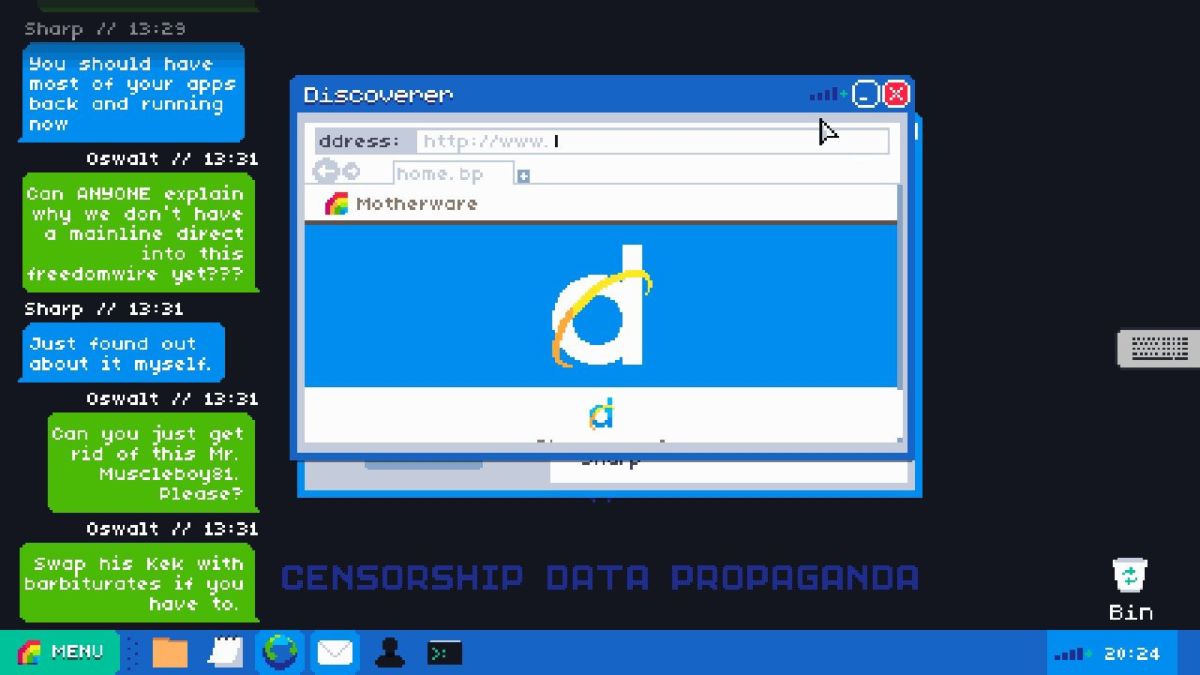 It’s the design, sound and atmosphere that makes Mainlining a good game — at least at its core. That faux-Windows OS looks fantastic, especially in the pixel-style graphics; the little pings and tunes of the system also work wonders to make you feel that it is a real system. Of course, using the internet is limited somewhat, but that doesn’t ruin the feel of the game. It really goes above and beyond to make you feel like a real MI7 agent.

Sadly, the core gameplay feels a little samey, and a little too much like work. The game doesn’t hold your hand at all, which I think is great, but when you’re truly stuck you tend to end up trying to figure out what the game designers have thought up, as opposed to a crafty hacker. But despite this, the game feels rather cool to play — at least on a PC. When it comes to the Switch, it all seems to go wrong. 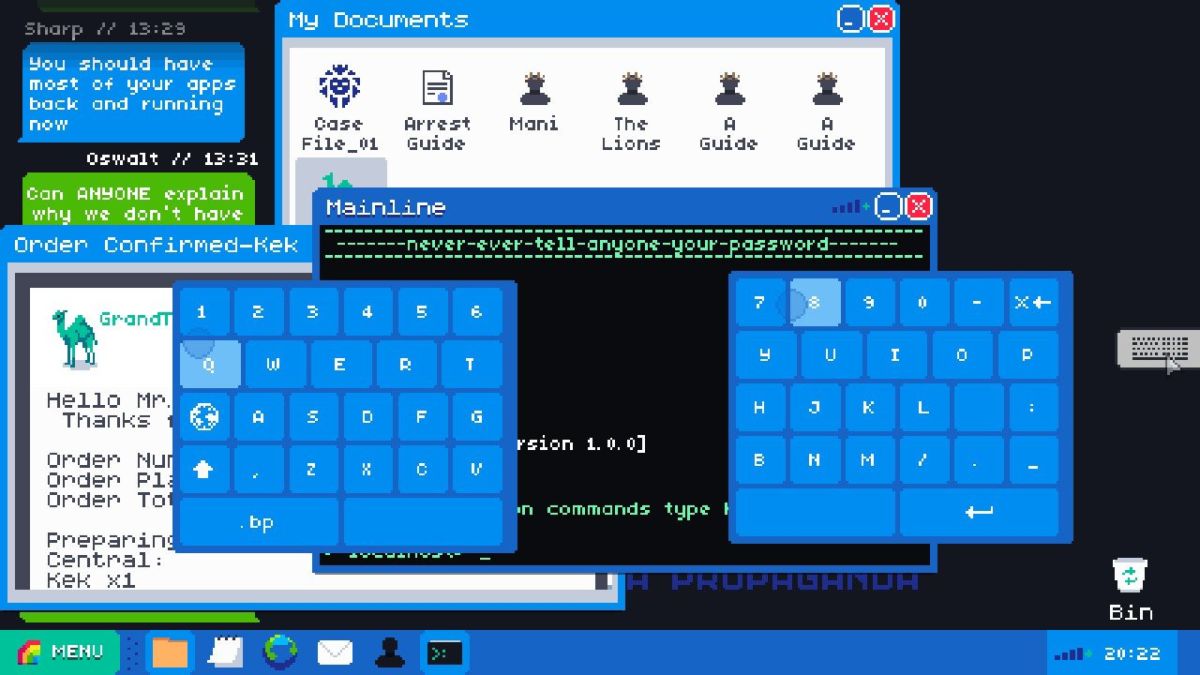 Some time ago, I reviewed a fantastic, short smartphone game called SIM – Sara Is Missing. SIM replicated a smartphone operating system, making you feel like you were pouring through info on a stranger’s phone. I played SIM on a smartphone, and the authenticity of the experience was heightened thanks to it.

When it came to playing the sequel, Simulacra, I was given the PC version to review. Suddenly, I was playing a game very similar to SIM, but without the smartphone aspect, and the game had totally lost its vibe. It no longer felt like I was creeping through someone’s phone, it just felt like, well, a game. And that’s one of the big problems with Mainlining. 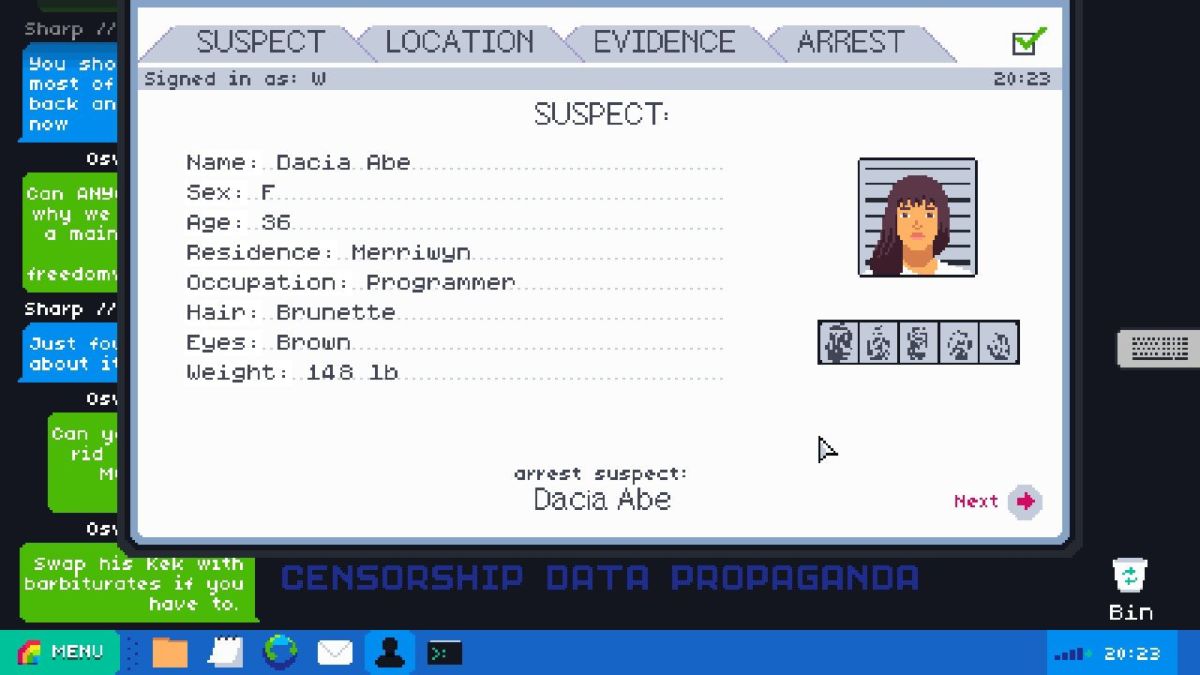 Mainlining’s original PC release mimics windows OS, and as you can imagine for a title that also attempts to mimic hacking, there’s a lot of typing. You may also have noticed a distinct lack of keyboard on the Switch. So, Mainlining on Switch has an on screen keyboard to replace the physical keyboard of the PC game, and it doesn’t really work.

On screen keyboards haven’t really evolved since the days of the NES. They’re usually a QWERTY-style affair slapped over what is going on. This is fine for the odd name input, or a quick ‘lol’ message to a friend, but for a typing heavy game it is an absolute menace. The board is split into two halves on screen, with left stick controlling the left and the right stick handling the right. 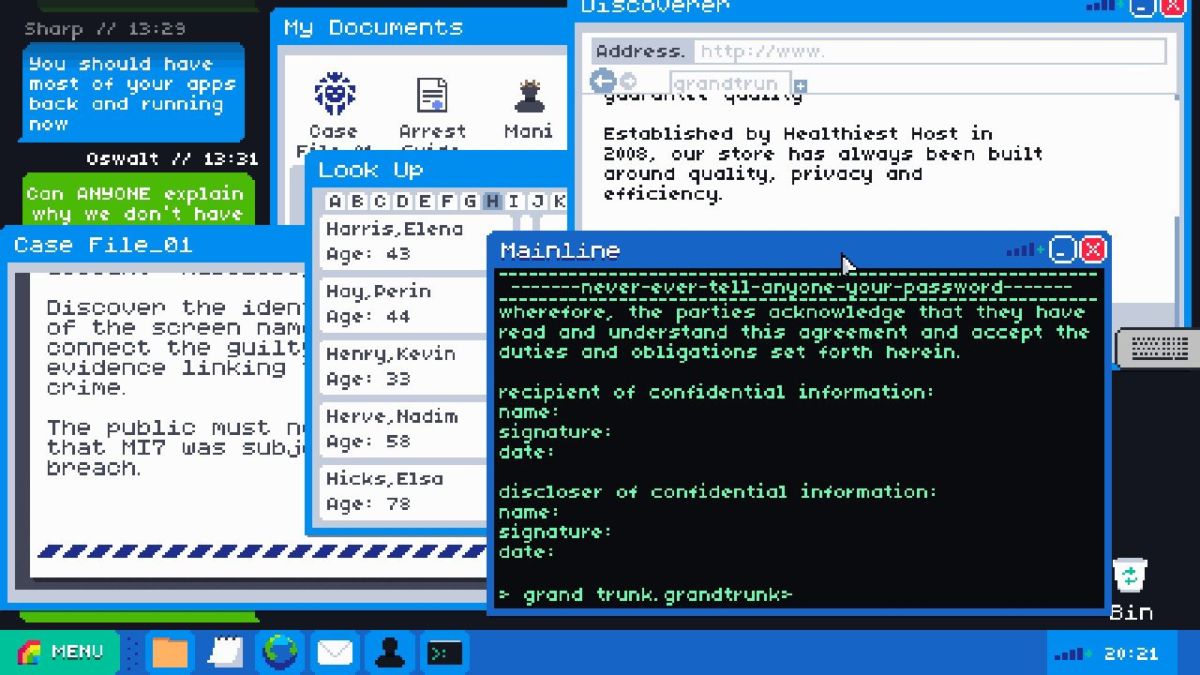 But you can easily have several small in-game windows open at once, and the two halves of this large on screen keyboard can often cover what you are doing. Sure, you can drag the keyboard and windows around for better positions, but it still feels like a hassle. Playing on the TV proved very annoying indeed, with an analog stick taking over the role of the mouse, having to navigate the screen with a pointer.

It is ever so slightly easier to play in handheld mode, as you can drag windows around with your finger and tap away at those keyboards with your finger. But on the Switch’s 6.2 inch display, those small windows and keyboard proved to be a little too small for my hardly mammoth fingers to handle. Ever tried to use real Windows PC desktop on a tablet? Not a fun experience. Neither is Mainlining. 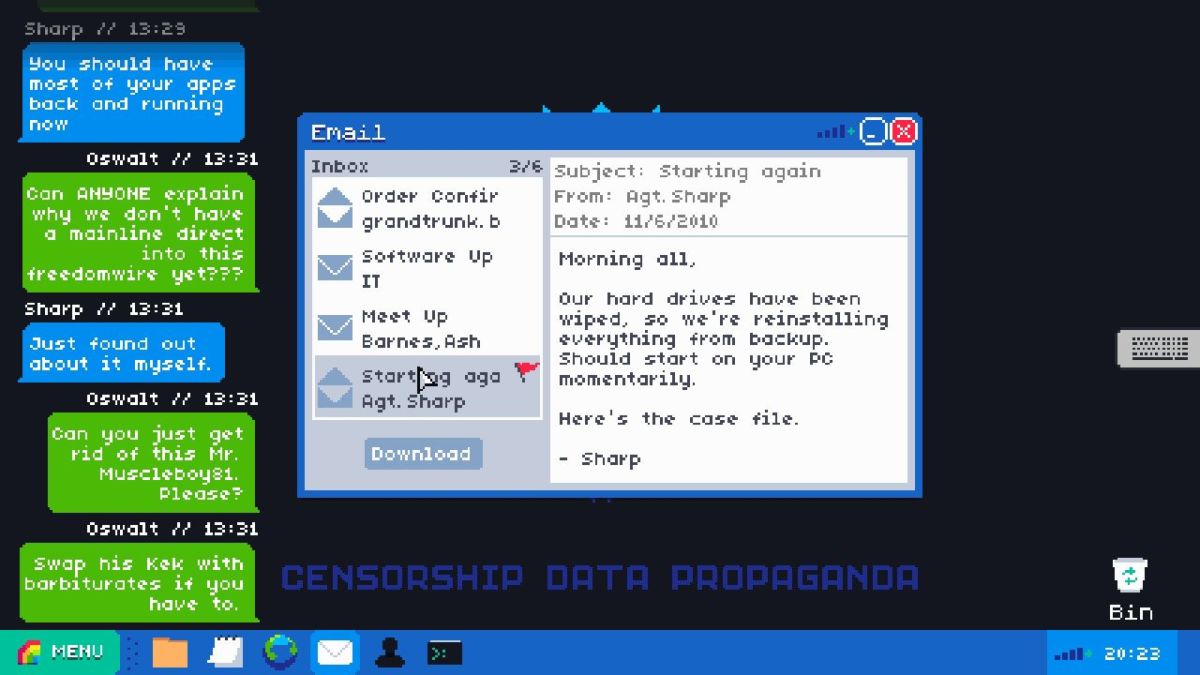 As mentioned, Mainlining doesn’t hold your hand, which is great for those who love to discover the game all on their own. I generally enjoyed it, but it was frustrating at times, as when you come up against a brick wall, you’ll often find yourself in a cycle of trial and error. This isn’t something that would make me turn off a game — I played hundreds of games like that growing up — but throw in Mainlining’s painful design on the Switch, and it often felt unplayable.

Mainlining is a good game at its heart. In fact, I downloaded the PC demo just to get an idea of how it compares to the Switch version, and it’s now on next payday’s purchase list. But the game just isn’t suited to the Switch. This is a game that simply must be played with a keyboard and mouse. Fingers, analog sticks and on-screen keyboards just cannot replicate the feel of being a secret service hacker.

It’d be great to see a ‘tablet’ version spin off of Mainlining, one that purposefully replicates an Android or iOS style operating system. That would work really well. But, as it stands, the art, sound and design cannot make up for the incredibly poor design choices of this port, and from a personal point of view, Mainlining (Switch) is very difficult to play, and does not make for an enjoyable experience.

If you like the look of this game but also own a PC (Mainlining isn’t a graphics heavy game), then purchase it on that format, as the Switch port should be given a wide berth.

Verdict
Its fantastic art and concept cannot help Mainlining on Switch from being an absolute chore to play.
3