A great early impression for Devolver's first published game of the year. 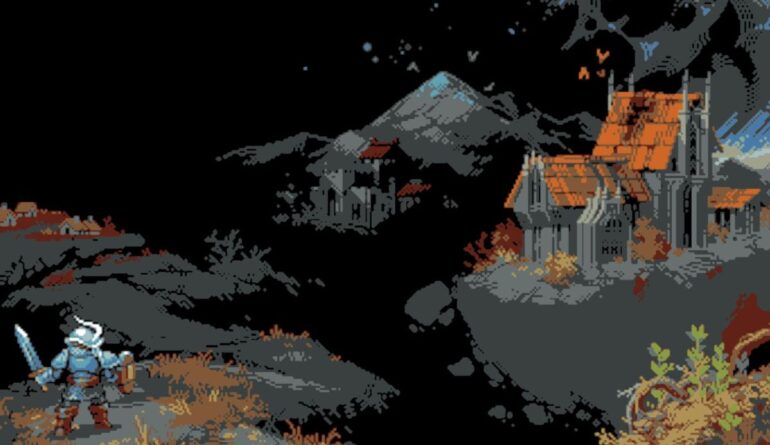 RPGs tend to work on a feedback loop: explore the land, fight the monsters, get the loot, return to town and find new quests. Over time, you get stronger and move to harder areas, but you’ll mostly continue on that same path until you reach the final boss. In developer Four Quarters’ new game, Loop Hero, that continuous grind is exactly what they’re looking to emphasize.

Set in a world recently destroyed by some evil magic, you play as a tiny hero barely hanging on to his sanity as he attempts to fight back the Lich that’s turned the world to darkness. To do this, the hero ventures around a looped road, fighting off bad guys, collecting gear and gathering material to rebuild his life and destroy the lich.

You aren’t actually the titular hero in Loop Hero, though. Instead, you take more the role of a builder, creating and altering the hero’s path so that he might fight more enemies to receive better loot. Instead of worrying about spell lists and combat order, the player is tasked with managing gear and crafting special overworld layouts to receive bonuses and extra materials.

It’s an interesting take on the regular concept of a feedback loop. You can see what’s coming up for the hero, so you may add a village to the path, giving a nice heal when crossed. Perhaps you’d rather include a grove or cemetery to collect a few more materials before heading back to camp. Each piece generally creates some beneficial effect while also adding enemies for the hero to fight.

The enemies aren’t all bad, though. Without enemies, the hero has no way to improve his gear and receive further improvements to the land. This creates a precarious game of spinning plates, where you want to optimise your loot while also not overwhelming your hero and getting him killed.

The land improvements play out through a unique card system. Enemies may drop different cards that could be placed in one of 3 separate areas of the map: on the road, next to the road, or out in the fields. With certain unique patterns, you may even unlock special land masses that create other notable effects.

Gathering materials then allows you to build up a small village that acts more like an upgrade tree for your runs. Certain buildings unlock perks when fighting monsters while other buildings give out artifacts for smaller improvements to the hero. There are even various classes to discover as you improve the town.

There’s a lot to take in here for such a compact indie game, and yet it all works so well. Each expedition feels unique due to the card drops and how that can affect the track. By the 7th time around, the loop is pure chaos with monsters all around, but your hero is stuffed with stats to help him get back to camp one last time.

All of this is presented in an old-school pixel style, perhap reminiscent to the days of an NES. Though the map may lack details, characters and dialogue have plenty of pixelated depth and the personalities shine quite well for a game with so little NPC interaction.

After learning the ropes, I found myself constantly trying for just one more expedition on the loop, hoping to secure enough resources to expand the town and improve my chances. Given enough rounds, the lich himself might spawn, and who knows where that may lead.

Loop Hero has its fair share of secrets, and the lore does a great job of explaining why the world has turned into a racetrack. That sense of discovery will keep players coming back around, as every turn feels like it may be holding something new. You can even customize the deck of cards used for building your loop so that different outcomes are more likely.

Loop Hero is something special, though it does take a bit of grinding to get to its more intricate systems. Still, it’ll be a game to watch as the secrets unfold and players begin discovering all the different ways to build out a track for their hero. Who knew repetition could be so much fun?

READ NEXT: Best Indie Games of All Time